Friends of the Irondale Schoolhouse

A map of Dutchess County held at the Library of Congress shows a schoolhouse standing on this sight by 1850. According to The Friends of the Irondale Schoolhouse website, the schoolhouse is one of 14 original one-room schools serving the Town of North East. Fearing demolition, in 2008 the small group of local preservationists incorporated as the Friends of the Irondale Schoolhouse with the goal of saving the building. On December 19, 2013, the Friends relocated the structure to the village center to make it more accessible to the public. An historic rehabilitation was nearing completion at the time of the building dedication on October 18, 2014, adapting it into a public information and visitor center.

Earliest written records held by the Friends date back to 1858. Serving the families of Ogdensville (Irondale) from ca. 1850 to 1930, the Irondale Schoolhouse is listed as District #7 Irondale. Student population ranged from ages 5-20, with a total 25 to 36 students served. Mary Mechare Leitch and Lillian Lown Caruso, two former students interviewed by the Friends, remember the bell ringing ritual, a shared honor among their male classmates, occurred each morning at 9 am. A potbelly stove was located in the middle of the room, surrounded by student desks. The teacher’s desk was near the front wall, between the two cloakroom doorways. Younger students were closest to the teacher’s desk; while older students, often helping the teacher with the younger students, sat closest to the rear blackboards.

Although 13 distinct districts appear on the 1867 Beers Map of the Town of North East, Dutchess Co., NY Millerton, North East Centre, Ogdensville, since the districts themselves may refer to either voting or school districts and since schoolhouse labeling also appears inconsistent, the original location still remains a mystery. Interestingly, in General History of Dutchess County, From 1609 to 1876, Inclusive (1877) author Philip H. Smith describes the site of a Moravian Mission House near the west shore of Indian Pond. Apparently, grave markers from early missionaries in an adjacent burial ground had been removed and were a “few years ago reset in a slate rock.” Smith also states that it was “removed previous to the recollection of the oldest person now living in the neighborhood,” he adds that the mission house was afterwards occupied as a schoolhouse. Meanwhile, in their restoration notes, the Friends noted that the original stone stoop was moved to Millerton with the schoolhouse. While it would be hard to corroborate as Smith’s missing burial marker, the 1867 Beers Map also shows two quarries in the near vicinity of Districts # 6 and #7 from where the stoop may have originated.

In 2017, the William G. Pomeroy Foundation awarded the Friends of the Irondale Schoolhouse a state historic marker. In 2019, the original site of the schoolhouse, 6126 Route 22, Millerton, NY, was a private rural residence. 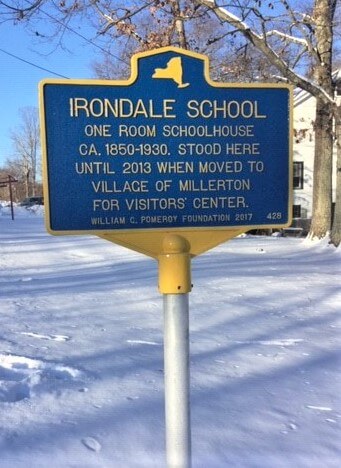 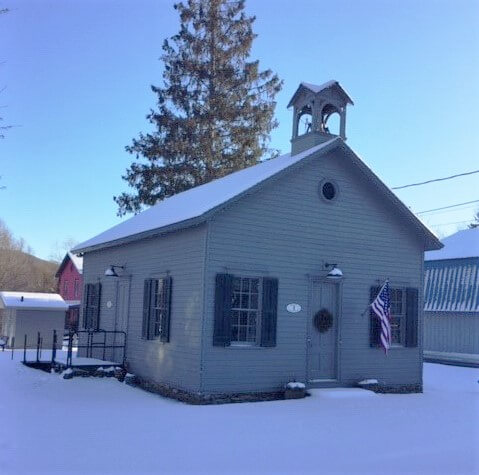