Captain Jacob Conklin was reported to have sailed with the infamous pirate, Captain Kidd. Conklin built a home in the Huntington area around 1710. It was later destroyed by a fire in the early 1900s.

When Captain Kidd was first making his name as a pirate, it was not only legal but encouraged. Shipping goods across the ocean was timely and expensive, and many of the commerce ships were attacked by pirates sailing under the flag of a rival country. Governments would then hire privateers to protect their own shipping routes and attack other nations’ ships, and an article from Newsday called “The Legend of Captain Kidd” states that Kidd wished to obtain a royal endorsement as a privateer for Britain. Kidd was able to gain King William’s support and made a deal with two other powerful political figures in the government to split any loot he managed to capture. While Kidd was over in the Indian Ocean, however, it suddenly became illegal to engage in piracy, and Kidd was no longer a defender of Britain but a pirate engaging in illicit activities. Kidd eventually made his way around to the eastern coast of the American colonies, and after docking in Boston, Kidd was arrested and sent back to London to stand trial as a pirate. In London, Kidd was also charged with the murder of one of his crewmates and was hanged at the infamous Execution Dock at the mouth of the Thames River.

In order to successfully raid ships and gather the loot, Kidd needed a substantial crew, and according to family lore, one of those men managed to escape and start a new life in Huntington. The man, Jacob Conklin, has various versions to his story, and one of his descendants wrote in to the Brooklyn Daily Eagle on June 20, 1907 to tell the story as he understood it to have happened. Conklin was stated as being born in Huntington but had a “restless and roving disposition” that drove him to join the crew of Captain Kidd. At the time, piracy was still legal and Kidd was known as a “respected person and…celebrated for his nautical skill and enterprise.” As a result, Conklin is believed to have joined Kidd’s crew just as the laws were being changed, but even after he became aware of the change, Conklin would not have been able to leave unless he wished to “walk the plank.” Conklin, according to the article, was forced to stay with the crew and sailed with Kidd from the Indian Ocean to South America and up through the Bahamas to Long Island. It was on Long Island that Conklin thought to make an escape, and after being sent ashore to gather water, he quietly slipped away to hide in an old hollowed out tree. A search party was sent from the ship, and according to legend, the group actually sat on the log Conklin had used to hide.

The ship eventually left with Conklin and went to Boston, where Kidd was arrested. Conklin stayed on Long Island and married Hannah Platt in 1701. Together, the two built a large house and raised seven children on what some estimated was as much as 3,500 acres of land. The Huntington Babylon Town History (1937) stated that the house was “unquestionably the finest” but that it burned in a fire in 1918. The house stood on the western slope of the southern hills and faced south, with a large porch that extended across the entire front side. The old family cemetery can still be found, where Jacob Conklin is buried with generations of his family. 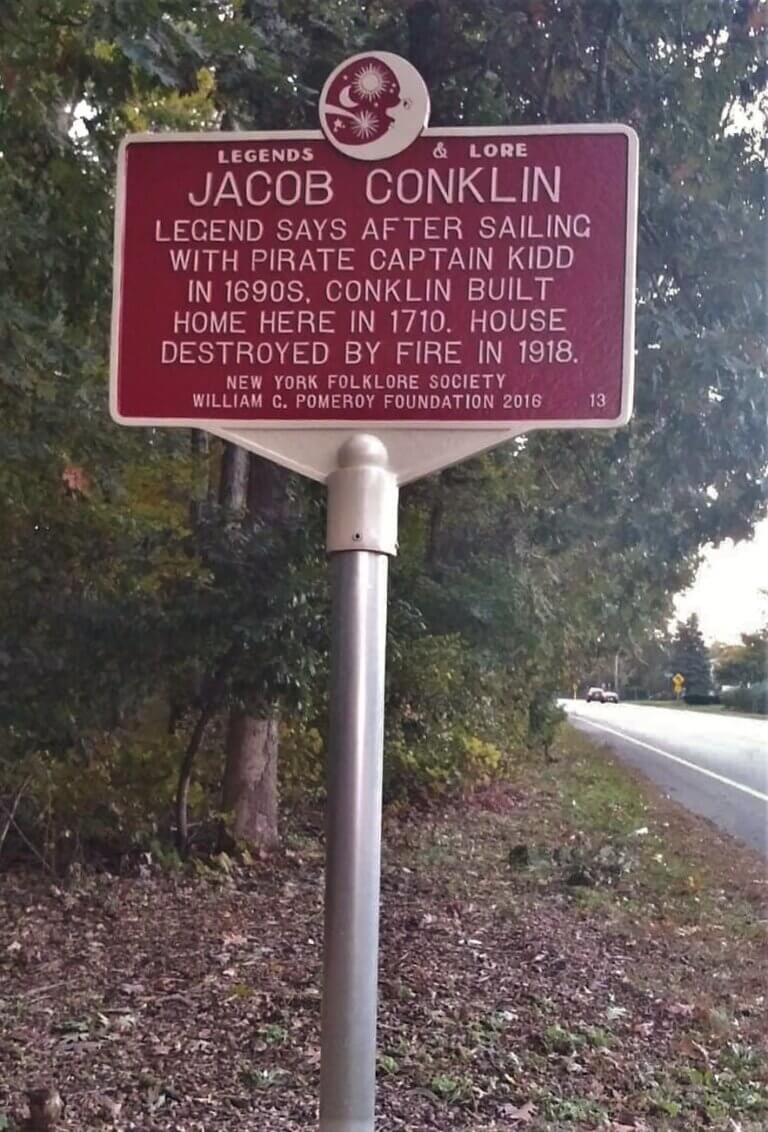