James Barker and his family arrived from England ca. 1766. Barker, an attorney by profession, was entitled to a patent of land granted by King George III for his service in the 4th Battalion of the Royal American Regiment. According to records held at the New York State Archives, Barker applied in person for his land in New York on June 12, 1767. It is believed Barker brought 23 tenant families with him from England. Supposedly, Barker named his estate “Woodstock” after the English Manor house associated with the Tudors, from whom his wife Elizabeth may have descended. (Eiklor, 2005)

According to the History of Greene County, published in 1884, James Barker was born in London in the year 1727. He was a member of the English bar and came to the North American colonies some time before the American Revolution with his wife, Elizabeth Moore. J.B. Beers claims that, according to Barker’s granddaughter Cornelia White, Elizabeth was a lineal descendant of the Tudors but gave up her rank and many of her property claims to marry James. As a result of forfeiting her inheritance of an estate in England, she and James Barker sold their remaining properties and emigrated to the colonies, bringing with them 23 families who were Barker’s former tenants. (J.B. Beers, 1884, p. 205)

In addition to his tenants, Barker also owned a number of slaves. J.B. Beers, relying heavily on testimony from Barker’s granddaughter, claimed that James was a “kind and considerate master” to his slaves and tenants. However, he apparently provided legal defense to the murderer of a slave. The indicted person and his family, the Salisburys, were personal friends of Barker and he successfully secured an acquittal. (J.B. Beers, 1884)

Barker’s family and tenants settled first in Durham before moving to what would later be called Cairo, apparently after receiving an inheritance from Elizabeth’s mother, according to J.B. Beers. But more likely the move was primarily motivated by the land patent Barker received for his military service during the French and Indian War. Dear Old Greene County, a local history compilation published in 1915, notes that many patents of land were granted in the area, but few settled and built on the lands at the time, except for James Barker.

Barker’s official letter petitioning for a military patent records that he served as a corporal of his regiment and was discharged in August 1763, entitling him to “his majesty’s bounty of land.” (James Barker Petition, 1767) J.B. Beers writes that he was granted his land patent just prior to the American Revolution. A map of the area where Greene, Albany, and Schoharie Counties intersect from the 18th century shows the tract of land which James Barker held title to. (Map of Partition…1700s)

Gene Eiklor, local historian, writes that while James Barker’s son, John, was involved in the War of Independence, James remained neutral. However, he was apparently involved with the Albany Committee of Correspondence for at least the year of 1775. (Selected Passages, 2005) His signature can be found on the Coxsackie Declaration of independence, a document preluding the Declaration of Independence of the Continental Congress. The document, with the signatures of 225 citizens of the Coxsackie area, declares the allegiance of the town to the Continental Congress and their loyalty to that body’s advice “…until a reconciliation between Great Britain and America or constitutional principles…can be obtained.” (Coxsackie Declaration, 1775) The text of the document is highly representative of the escalating tension at that moment; it specifically cites their shock at the Boston Massacre. But at the same time it still clearly shows a desire for possible reconciliation.

After the war, according to Eiklor, James Barker was involved in certain infrastructure projects, most notably the Susquehanna Turnpike or, as called in the eastern end of the route, the Catskill Turnpike. He also continued serving in magistrate roles under the new government as he had in the colonial one. (Catskill Examiner, 1820)

James Barker died on November 11, 1820, leaving his sizeable estate to be divided among his progeny. (Catskill Examiner, 1820) His only surviving son, John, and his grandchildren were the primary recipients of his estate when it was divided per James’ will. (Albany Argus, 1821) His tombstone can be found in the Barker Cemetery in the hamlet of Woodstock. (Tombstone, Barker Cemetery)

The historic marker funded by the William G. Pomeroy Foundation was erected in 2015 on what was once part of James Barker’s land. 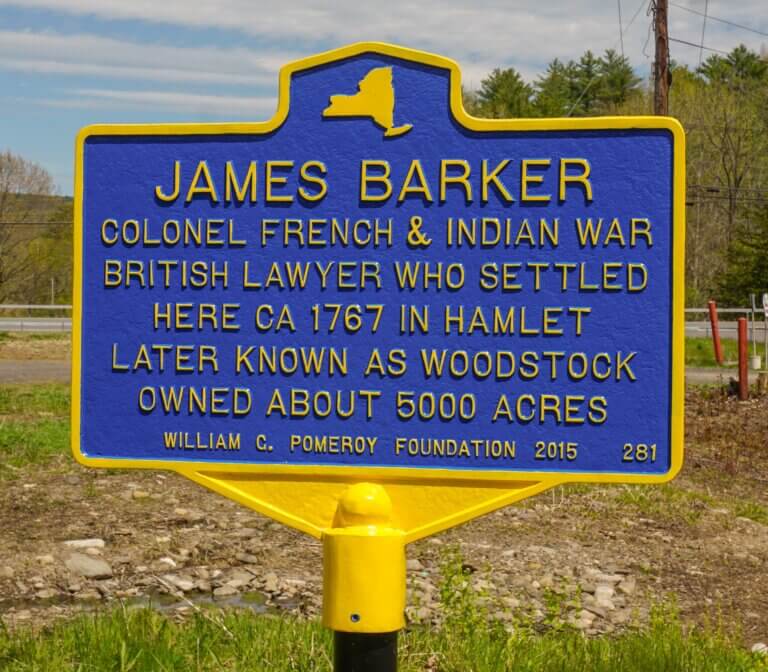 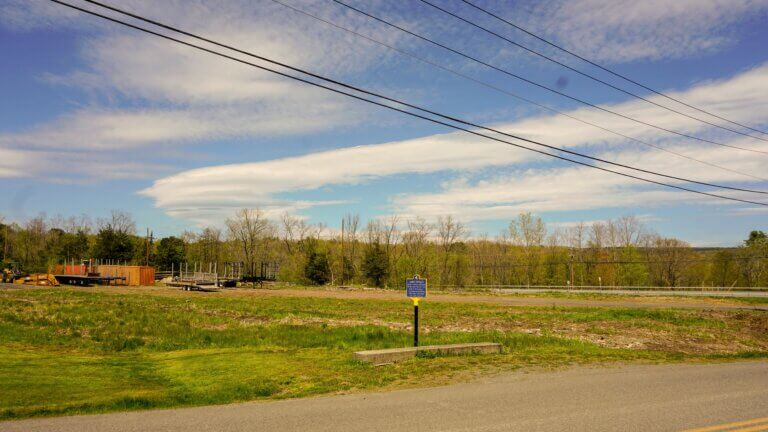