During the War of 1812, it’s said that Job Hoisington gave his life to hold off British Forces ahead of Buffalo’s Burning. This gave time for American General William Hull’s militia to escape.

A preexisting New York Historical Marker for Buffalo and Erie County Historical Society on waymarking.com adds that Buffalo’s “1812 War hero” was born when “Gallant” Job Hoisington sacrificed his life near this site on Dec. 30, 1813. During a battle between Capt. Hull’s US Army Militia and British forces with their Native allies, the 51-year old Hoisington single-handedly held back the enemy at what is now the intersection of Porter and Plymouth Aves, granting his fellow militiamen, family, and other innocent villagers vital time to escape one of the worst horrors of the War of 1812: The Burning of Buffalo. Job’s sacrificial body was found nearby in spring 1814, just months before the War of 1812 ended.

Christopher N. Brown’s Historic Plymouth Avenue in the Kleinhaus Neighborhood (2008) notes that Hoisington was portrayed in a December 20, 1942 Courier Express article when the U.S. was engaged in World War II. Invoking his heroism as an “inspiration to modern Americans”, the article was accompanied by a printed graphic titled, “The Man Who Stayed for ‘One More Shot’”.

To his name, Findagrave.com appends the rank of Captain, and the following vital information: born 10 Aug 1762 Farmington, Hartford, CT, the son of James Hoisington and Elizabeth Richards. He married Sarah Knapp on 13 Dec 1792 in Panton, Addison, VT. In addition, Hoisington was a carpenter, expert marksman and former captain in the Vergennes militia of Vermont, fighting alongside the Seneca tribe of Native Americans, Buffalo Militia, and regular American forces against the British in the First Battle of Black Rock on July 11, 1813. To the confrontation with the British on December 1813, the source adds that he was under the command of Lt. John Seeley. Hoisington was interred in the Cold Spring Burying Ground but in 1850, his remains were moved to Forest Lawn Cemetery.

A May 17, 2008 buffalorising.com article commemorating the 200th Anniversary of the War of 1812 and the dedication of the NY State Historical Marker, also recognized Hoisington. Brown, now president of the Kleinhans Community Association, a neighborhood block club surrounding Kleinhans Music Hall in the Allentown Historic district of Buffalo, said “Hoisington has been forgotten over the years, [but] he’s going to be remembered in the next year or so.” The article explained that besides becoming the subject of a historic marker, Hoisington was soon to become the subject of a novel about local ghosts. Initially buried in 1814 at Cold Spring Burying Ground, as noted by Findagrave.com above, his remains were exhumed and moved to the new Forest Lawn Cemetery. According to local lore, sometime later Hoisington’s skull was stolen and it has never been recovered; in fact, some claim to still see him walking around looking for it! 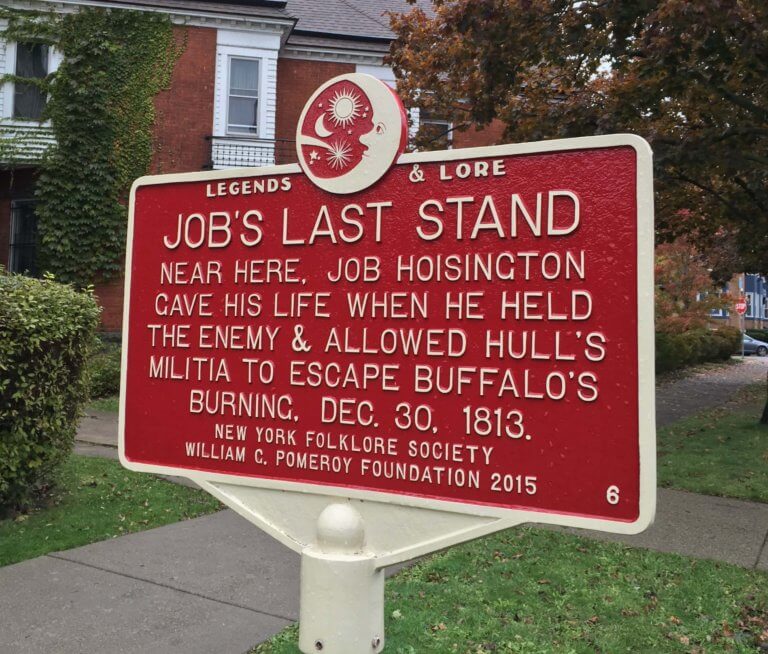