The former home of War of 1812 veteran, Pomeroy (Pomroy) Jones is located about a mile west of the hamlet of Lairdsville, part of the Town of Westmoreland, New York. Pomeroy Jones was a local judge, historian, and author of “Annals and Recollections of Oneida County.” While his given name was Pomeroy after his mother’s family, he used the spelling “Pomroy” most of his life.

A July 29, 1884, article in The Rome Daily Sentinel, recounts Pomroy’s life following his death. The article notes that around 1787, Pomroy’s father Nehemiah Jones arrived from Berkshire County, Massachusetts to the area now known as Westmoreland. Here, Nehemiah built the farm where Pomroy was later born, on December 30, 1789. Nehemiah was a schoolteacher in Massachusetts and took it upon himself to educate his son.

Nearly 30 years after the conclusion of the American Revolution, the United States was once again in the midst of a conflict with Great Britain, known as the War of 1812. As a young man, Pomroy “enlisted as a volunteer and served six months as sergeant major in Col. Benedict’s regiment of detached militia at Ogdensburg” in 1812. Two years on, in 1814, he served in Sackets Harbor in Jefferson County, NY. Upon his return a year later, Governor of New York, Dewitt Clinton, “appointed him justice of the peace, for his service in the war.” Pomroy held this office for 25 years. Another article in The Rome Daily Sentinel from September 26, 1914 states that in 1831, Pomroy became “sergeant at arms of the Assembly at Albany,” and in 1834 became, “a member of Assembly from Oneida county.” The article states continues that he was a “judge of Oneida county for nine years,” between 1836 and 1846. During his lifetime, Pomroy furthermore, “served his town in the capacity of supervisor and has been chairman of the board” (The Rome Daily Sentinel, 29 Jul 1884).

Pomroy’s obituaries emphasize that despite his other pursuits, farming always remained a priority. He was the first president of the Oneida County Agricultural Society and continued to be a member for many years (History of Oneida County, New York, By Samuel W. Durant, 1878). As an early resident of Westmoreland, Pomroy wrote a book in 1851 entitled, Annals and Recollections of Oneida County, which a The Rome Daily Sentinel article dated September 26, 1914 highlighted, and remarked that it was “one of the first volumes of its kind published in the state.”

Pomroy was married three times, first to Mehetebel Moore from Connecticut. Together they had nine children, however only four survived to adulthood. After Moore died, he remarried Eliza Royce from Clinton, NY and later remarried for a final time to Mary Emigh from Berkshire County, Massachusetts (The Rome Daily Sentinel, 29 Jul 1884). Pomroy passed away on July 28, 1884 at the age of 94 (The Rome Daily Sentinel, 26 Sep 1914). According to a deed filed at the Oneida County Clerk’s Office on June 21, 1873, Pomroy gave his property, including the house, to his youngest son, Lafayette Jones. In 1910, the family sold the house.

As of 2019, the house and farm still existed, making the property over 200 years old. 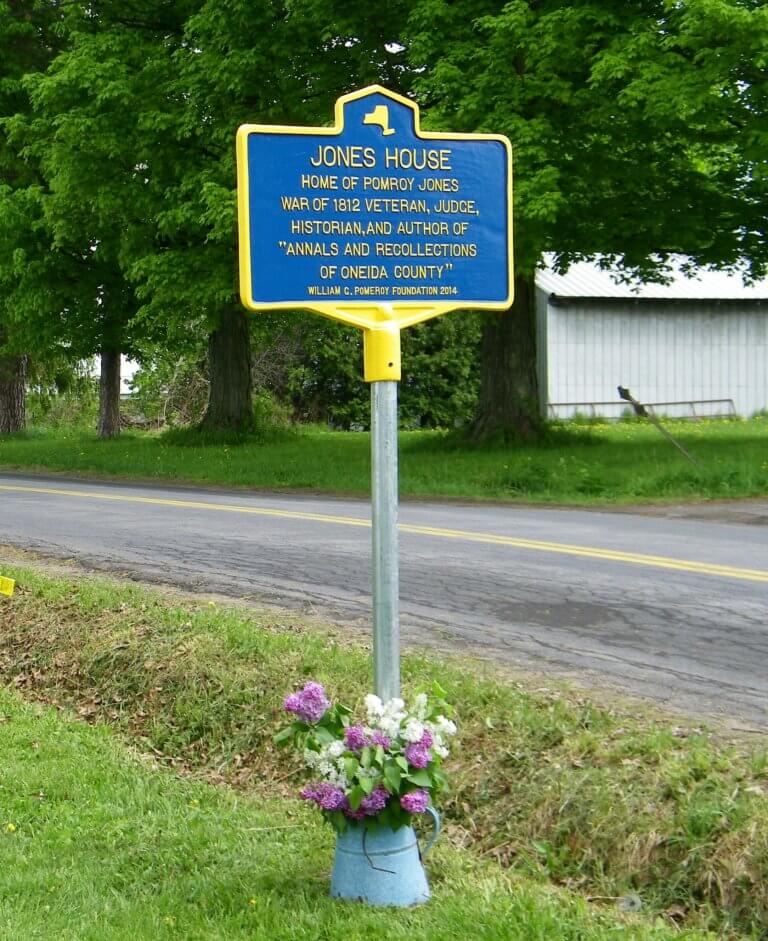