Robert Hendre Kelby (1847-1927) served as librarian to the New York Historical Society from 1898 to 1920. Kelby lived in the house with his wife Jennie Corrigan Kelby until his death in 1927.

According to Freeport History Encyclopedia, Robert Hendre Kelby served as librarian to the New York Historical Society from 1899 to 1920.  Upon his retirement he was granted the title Librarian Emeritus. After serving in the Navy during the Civil War, Kelby began working with the New York Historical Society in 1868. Under his direction, the collection of the Society grew from 17,000 volumes to over 150,000 volumes and 160,000 pamphlets. Kelby is credited with helping the Society raise the funds necessary to move to its current location on Central Park West.

The January 1928 Quarterly Bulletin of the New York Historical Society included a biography of Kelby, whose death on August 25, 1927 apparently ended an uninterrupted 70-year tenure of Kelby family employment at the Society, a tradition started by his father on July 7, 1857, which he and his older brother William Kelby continued. “During these years [the Society’s] greatest treasures were acquired, and from small, struggling institution, it has risen to its present position and acquired the palatial home it has to-day.”

The Society bulletin also noted that in addition to the expansion of the library holdings, earlier in Kelby’s career which included a thirty-year apprenticeship, other significant collections were acquired under his guardianship. For example, to the existing Bryan Collection of Old Master paintings, in 1882 was added the Louis Durr Collection, an acquisition of 182 paintings. With the many important historical portraits of distinguished Americans which these collections provided, the Society’s Gallery of Art grew in its public esteem and renown. “This is equally true of the Society’s Museum collection in adding to its relics of local interest,” the biography added; “Before the incorporation of the Metropolitan Museum of Art in 1875, the Society was the recipient of a number of collections which seemed foreign to its purposes but which it accepted both for their importance, and because it was the only institution in existence which could house them.” The most valuable gift which came to the library during Mr. Kelby’s administration, due chiefly to his efforts, was the library of Rufus King, consisting of 5,247 volumes, presented by the late Miss Mary Rhinelander King and the late Mrs. Charles Ray King in 1906.

In the words of the Society biographer, Mr. Kelby was “[u]nostentatious in thought and manner… [he] shunned publicity, and all his work was done within the walls of the institution he was serving. His quiet disposition rarely, if ever, gave vent to excitement, but rather, his quick wit and genial humor turned a tense moment to laughter.” In addition to this fine verbal portrait, a painting of Kelby by Irving R. Wiles also appeared on the front cover of the Society’s Bulletin.

Mr. Kelby was a member of the American Antiquarian Society, American Museum of Natural History and the New York Genealogical and Biographical Society. He was also a member of the George A. Ricard Post, Grand Army of the Republic. For many years Mr. Kelby had lived in Brooklyn, NY, but about 1903 he removed his family to Freeport, Long Island. They purchased the three-story shingle-style house on the northwest corner of Lena Avenue and Wallace Street in an area of Freeport known as Randall Park. A lot called “Charles Kelby” appears at the location described above on E. Belcher-Hyde’s Map of Nassau County 1914 Long Island opposite real estate developer John J. Randell’s estate and grounds, Woodbine. 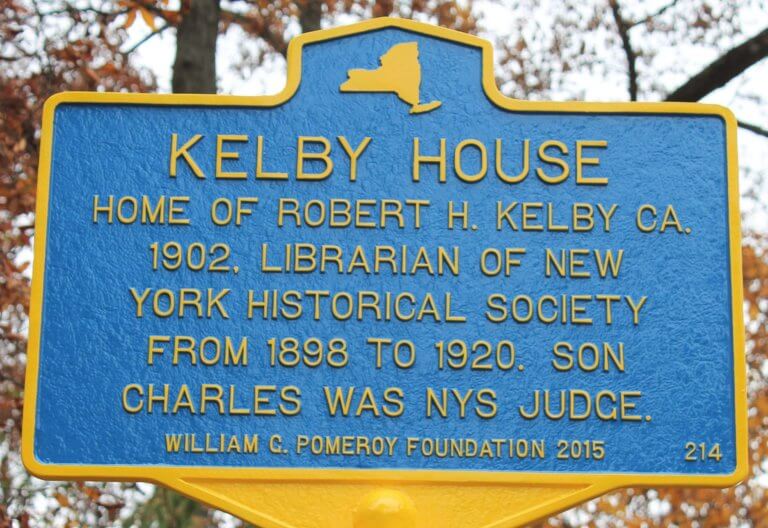