On October 19, 1780 British troops led by Col. Sir John Johnson left the ruins of Stone Arabia behind returning to the Mohawk River moving westerly toward Canada. General Robert Van Rensselaer of the Tryon County Brigade arrived from Schenectady with approximately 500 men and engaged the British at Klock’s Field nearly a mile west of the Fort Klock Historic Site. Van Rensselaer forced the British to retreat.

In 1902, New York State published the majority of Governor George Clinton’s correspondences in Public Papers of George Clinton, First Governor of New York. In this collection is a letter in which Clinton informed another Continental Army member, James Duane, of the horrors that the British, under Sir John Johnson’s command, committed in the Mohawk River Valley in the fall of 1780. Clinton recounted the events, claiming that they set fire to the communities of “Schoharie, & a part of the Settlem’t of Balls Town & almost the whole of the Intermediate Country on both sides of the Mohawk River from Fort Hunter to Fort Rensselaer at the upper end of Cannojoharie, including the settlement of Stone Arabia.” In total 150,000 bushels of wheat and over 200 dwellings were ruined. Following this incident, Clinton sent a letter to General George Washington on October 18, 1780. This letter is just one in Franklin Hough’s 1866 collection, The Northern Invasion of October 1780. Clinton told Washington that he “ordered General Van Rensselaer…to march and endeavor to intercept them [British].”

The main goal of attacking the British was to put an immediate end to the destruction they were causing by raiding and burning towns. General Van Rensselaer reported to Clinton, in The Northern Invasion of October 1780, to being less than a mile away from the British and that he planned to pursue them with his 900 men. The Battle of Klock’s Field took place on October 19, 1780 at Fox’s Mill, Tyron County (in modern day Palatine, NY) and moved north, close to St. Johnsville. Luckily, Rensselaer was joined by Colonel DuBois, who brought reinforcements and additional supplies with him (Public Papers of George Clinton, First Governor of New York). The Pennsylvania Journal and the Weekly Advertiser published an article on November 1, 1780 which described the events of the battle as lasting “three quarters of an hour.” The article states that the Americans “forced them [British] to give way and cross the river, leaving their plunder, baggage and prisoners behind them.” Rensselaer reported later to Clinton that the British escaped towards nearby Stone Arabia. He had hoped to pursue them however due to the combination of injuries sustained and tiredness of the troops, they lacked the strength to overtake the British troops (The Northern Invasion of October 1780). 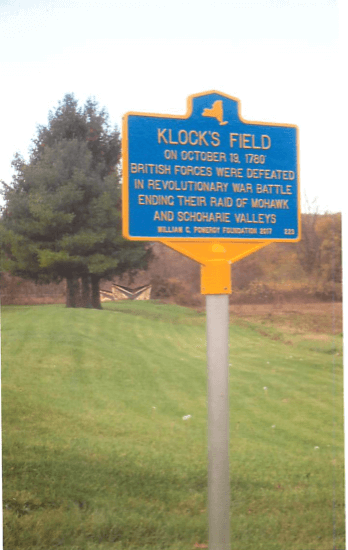