Prior to the formation of Alabama as a state in 1819, Josiah Blakeley formed a town in the Mississippi Territory known as Blakeley. The Town of Blakeley existed for around 50 years. By the late 1860s, it was completely deserted and turned into a ghost town full of legends such as the “Hanging Tree” and the “Jury Oak.”

Little is known about the founder of the Town of Blakeley. It is believed that Josiah Blakeley left Connecticut in the late 1790s and moved south to Alabama, a Spanish territory at the time. He purchased 7,000 acres from a physician named Joseph Chastung with the desire to establish a town that would “wipe out the Indian memories and carry a Yankee name down to posterity” (A History of Baldwin County, Kay Nuzum, 1971). Plans for Blakeley’s town were approved by the legislature of the Mississippi Territory in 1813, however Josiah passed away in 1815. Nevertheless, his associates followed through on Josiah’s plans and began building houses and businesses in the new Town of Blakeley. In 1819, Alabama was officially recognized as a state and Blakeley was soon incorporated and made the county seat of Baldwin County.

The community of Blakeley did not build a courthouse until after 1830. Prior to this, it was believed that judges held court sessions under the branches of the many large and ancient oak trees that were extremely prominent in the town. One tree in particular was nicknamed “Jury Oaks.” This tree was said to have been located in the center of Blakeley and that the judge would climb onto a limb in the tree and conduct proceedings. In conjunction with “Jury Oaks,” there was also the nearby, “Hanging Tree.” According to legend, if a death sentence was announced then the prisoner would have been hanged from this huge oak tree. Due to the abundance of oak trees, the people of Blakeley never built gallows.

As the county seat, Blakeley survived into the 1860s, however the town’s population began to dwindle. Malaria and yellow fever took a large toll on the community, so much so that many people left the area. This, paired with high land prices and speculation, discouraged new people from settling in Blakeley. During the Civil War, Blakeley was used as an army camp and even served as the site of one of the final battles of the war, the Battle of Blakeley. Following the end of the Civil War, the Town of Blakeley was abandoned.

The “Jury Oak” was badly damaged during a hurricane in the 1970s and eventually fell in the 1990s, however, as of 2021, remnants of the “Hanging Tree” still remained in Historic Blakeley State Park. Since its establishment in the mid-1970s, visitors to the park continue to learn the legends behind the trees. 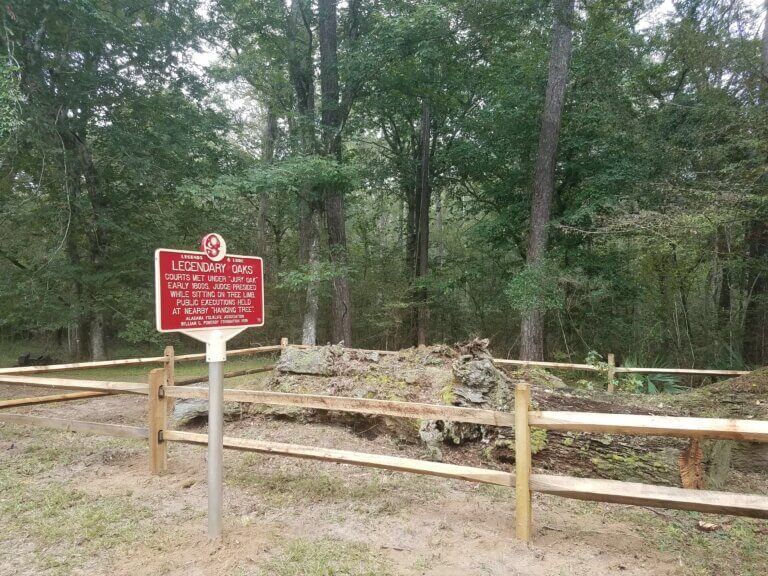