A few miles south of the Town of Brookfield, New York, just west of Beaver Creek lies a house fondly named Locust Lodge. It was home to early Brookfield resident John Morgan and served as a summer home for the former Governor of New York, John Adams Dix. Later, Locust Lodge was home to six generations of the Camenga family.

John Jordan Morgan was born in Queens County, New York around 1768. He became a surveyor, member of the Assembly of New York and served as U.S. Representative for the State of New York (Memoirs of John Adams Dix, Morgan Dix, 1883). According to Land Papers Records for the State of N.Y. around 1793, Morgan purchased land in modern-day Madison County, NY and built his home there. Author L.M. Hammond describes the house in her 1872 book, History of Madison County, NY as “a pretty cottage, located in a most romantic spot; the green and park in which it is situated give it a picturesque appearance.” A December 24, 1919 article, featured in local newspaper The Courier, claims that Morgan was responsible for planting groves of locust trees on the property, giving the house its nickname, the Locust Lodge.

Morgan was married twice; first to Catherine Warne who passed away and then to Elizabeth Baldwin. While Morgan did not have any children of his own he adopted the niece of his first wife whose name was also Catherine (Memoirs of John Adams Dix). Morgan hired John Adams Dix, a lawyer at the time, who soon married Morgan’s adopted daughter, Catherine in 1826. Dix served in the Union Army during the Civil War and continued on into a successful political career. Beginning at the state level, Dix was as a New York State Assemblyman and Secretary of State, was elected to the U.S. Senate. He served as U.S. Secretary of the Treasury under U.S. President James Buchanan, was appointed Minister of France and lastly, in 1873, he was elected 24th Governor of New York (Memoirs of John Adams Dix).

Together, Dix and Catherine had many children who enjoyed spending their summers at the Locust Lodge. They hired Lodema Butts as a nursemaid to help with their children and Daniel Camenga as a coachmen. In 1840, Butts and Camenga were married. They lived in the Locust Lodge with their family and maintained it as a summer property for the Dix family.

Following the deaths of Catherine and Dix, their son Morgan settled their estate and sold the Locust Lodge in 1903 to John Dix Camenga, son of Daniel and Lodema Camenga (Deed, Madison County, NY Clerk’s Office, 19 Jan 1903).  Following the sale of Locust Lodge, six generations of the Camenga family called it home.

As of 2020, Locust Lodge remained a private residence with locust trees still growing on the premises. 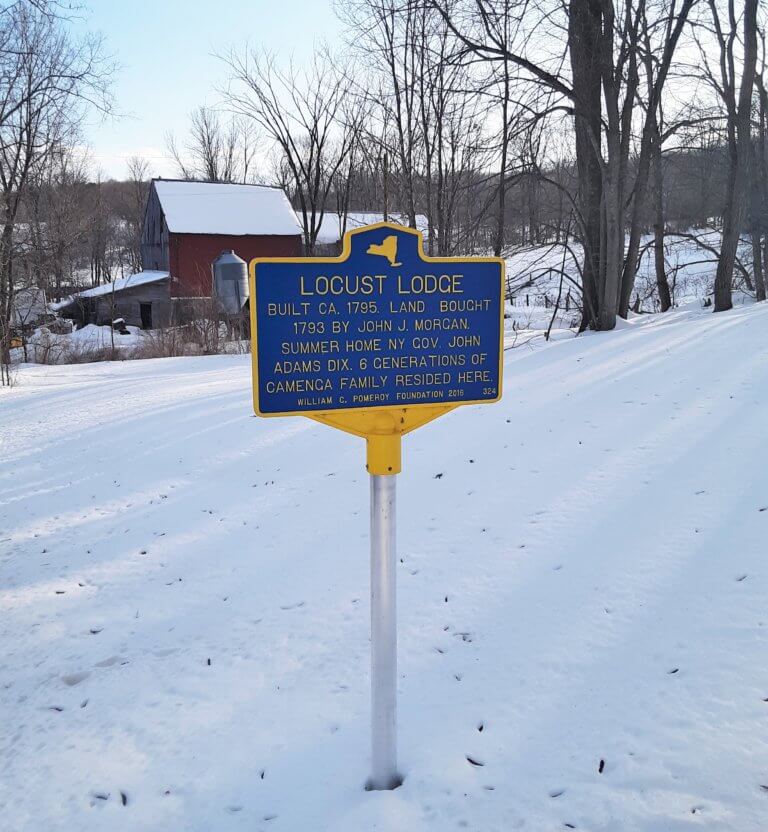