The Longwood Estate was originally part of a manor that St. George granted to William Smith in 1693. The house was built circa 1790. In 1829 it served as the home of Town Supervisor William S. Smith. It has been owned by the Town of Brookhaven for the use of its residents since 1974. The Longwood Estate was placed on the National Register of Historic Places in 1981.

The Town of Brookhaven Parks & Recreation website refers to the Longwood Estate as a “treasure.” The domain of the preeminent Smith family until 1968, the estate was in a remote area with approximately 7,000 acres running from the Connecticut River (now known as Carman’s River) east of Manorville, and south along South Country Road. To this effect, Carman’s River, Smith Landing and Smith’s Point, all appear prominently on the 1888 F.W. Beers & Co. Atlas of the South Part of Brookhaven, as well as vast expanses of unsettled land east of the River as described. South County Road is also identifiable.

The property was handed down through the generations, and in 1817, according to the Town website, William Sydney Smith became the proprietor. Jean Lauer’s History of the Longwood Estate (1980) explains that Smith leased his extensive holdings out to tenant farmers. The farm leases were described as comprehensive and elaborate. For example, “an agreement with Joshua Glover in 1803 provided for equal shares to each party of ‘…anything… where there is any profits arising’. Glover was expected to plow thirty acres a year and plant it in grass every three years. He was required to ‘… put in the best fences with rails and loping’.” One of the most valuable assets of the Estate was timber. The leases specify that standing timber was solely the property of the landlord and the farmer was only allowed use of the deadfall.

Lauer continues to describe the original Longwood house which was a large Georgian center-hall colonial with two square rooms on either side, each with its own corner fireplace. A wing to the east contained a kitchen. The original house was apparently very like the Manor St. George at Mastic, an earlier, Pre-Revolutionary manor house also in the Smith family. The source adds that the nearest settlements were at Yaphank and Middle Island at this time. Geographically, the northern section of the Manor, also known as the “Swamp” or “Longswamp” contained farmland, pasture, woods, river fronts, ponds and the swampy area to the east (Wampmissic) which constituted part of the headwaters of the Peconic River. An earlier Beers Map of Brookhaven, Long Island 1873 shows the hamlet of Yahank to the west of the W.S. Smith Longwood Estate in Ridgefield. The Peconic River is also visible to the east, bounding the hamlet of Manorville and the Town of Riverhead.

William Smith married Eleanor Jones from Cold Spring Harbor and raised 10 children on the Estate, adding onto the house to accommodate them. Lauer notes that the house was enlarged and embellished ca. 1840-1850 to reflect the “ultimate in modern taste.” The roofline was modified and decorative brackets under the eaves were installed. Porches were added as well as the decorative clustered chimneys and gothic battlements. What started as an “austere and elegant house was transformed into a romantic Victorian farmhouse.”

An astute businessman with extensive holdings in bonds and mortgages, the Town website explains Willliam S. Smith developed Longwood Estate into a profitable business in livestock and lumbering, where a saw mill in Yaphank became instrumental in the development of the Long Island Railroad. Smith served as Brookhaven Supervisor from 1829 -1834. Additionally Smith was also Suffolk County Treasurer, and a New York State Legislator. He passed away in 1879 at the age of 83 and Eleanor in 1884 at 79 years old. Their grandchildren took over the management and preservation of the Estate.

Descendants William Sidney Tangier and Helen Tangier Smith later willed the Estate to Elbert Clayton Smith. Elbert donated 51 acres to the Longwood School District and the Greenbelt land to Suffolk County. Upon his death in 1968, his widow sold the estate to Levitt Real Estate Developers. At the time, the contents of the home were auctioned off. Then in 1973, developer Wilbur Breslin and Herbert Carmel purchased the property for commercial and industrial development. Brookhaven Town officials and area residents strongly opposed the plan, and in 1974, Breslin and Carmel finally donated the manor house and 35 acres of land to the Town of Brookhaven.

As of 2019, the Smith-Longwood Estate, located at the corner of Smith Road and Longwood Road in Ridge, is operated by the Town of Brookhaven as a museum with daily tours offered to the public. 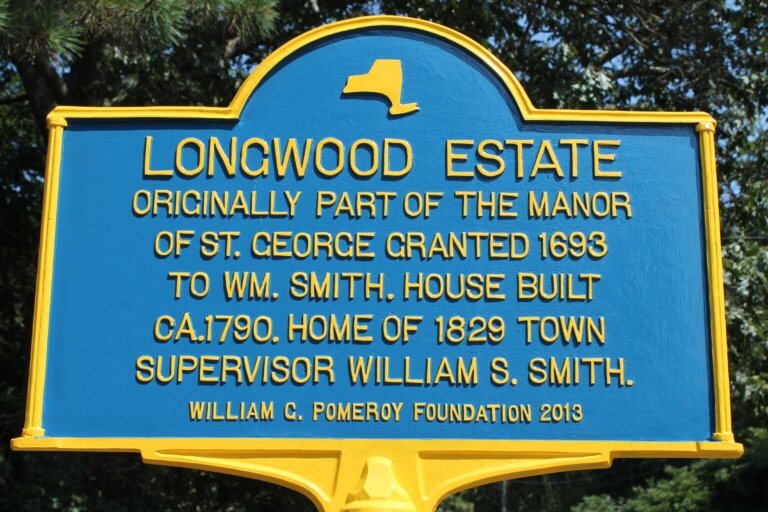