Botanist Lucy Millington, originally Lucy Bishop, was born in 1825 in the hamlet of New Russia. Millington was highly knowledgeable about the plants and trees of New York State. During the 1870s there was a mysterious blight affecting trees in the Adirondack Mountain region. Experts in the field were baffled and had no explanation for these dying trees. It was Lucy Millington who determined that the damage was caused by Arceuthobium pusillum, a species of parasitic dwarf mistletoe.

Part of the prominent Bishop family from New Russia, an article from Hunta: A Journal of Botanical History by Beatrice Sheer Smith states that Millington was the second of eight children that ended up being dubbed “the American Brontes” by William Cullen Bryant. Three of the children—Annette, Amy, and Bainbridge—were especially well known among the artists that flocked to the Adirondacks during the mid-1800s, and while there are multiple sources that discuss their achievements, only two known published pieces mention Millington and her work as a botanist. One of the pieces was written by Judge Augustus Hand, who had been acquainted with Millington’s three siblings but knew little about her. What Judge Hand did know was shared with him by a former college friend, who “never tired of talking of [Millington’s] unique personality” and skills as a botanist.

There is little known of Millington’s life after the general Bishop family history and before she began her extensive correspondence with fellow botanists, but Smith asserts in her piece for Hunta that those years in between would have been full of “exploring, plant collecting, continual observation, and, above all, intensive study.” At the time of Millington’s elusive middle years around the 1850s and 60s, botany for both professionals and amateurs consisted of mostly collecting and identifying species, and it is speculated by Smith that Millington’s time spent collecting “produced the mature, knowledgeable botanist” that made the important discovery in 1871.

Smith recounted Millington’s find as described in letters to Charles H. Peck, the New York State Museum of Natural History botanist, where she stated that a hike to a swamp 15 miles from Millington’s home in Glens Falls, New York brought her to the mysterious new plant. While at the swamp, Millington had noted that several black pine trees were dead and deformed, and on August 10, 1871, she was able to locate the culprit. Initially being unable to identify the specimen, Millington sent out samples to fellow botanists while stating that she believed it to be a type of mistletoe. Her assumption proved to be correct, with the parasite now being known as Arceuthobium pusillum. In her writings about the discovery, Millington stated that she wasn’t sure such a moment could ever happen again, and that “though all the world may now look on, mine was the first delightful thrill of recognition.”

Despite Charles Peck’s best attempts at making sure Millington received acknowledgement for her discovery, Smith states that “her name has long been forgotten,” if it was even known at all. Millington continued her work, however, and it is said that her interest “in natural history knew no limits.” Along with her discovery of the dwarf mistletoe, she was interested in studying microscopic fungi, causes of diseases in fruits, and Darwin’s theory of evolution, among other things. Nature also happened to be more than just a biome for study in her life, with the outdoors turning into “a place of religious experience and spiritual renewal.” Millington was a firm believer that nature taught more “sweeter, purer lessons” that any “well-meant religious book” ever could.

As of 2019, Lucy Millington’s marker stands next to a small stone and plaque dedicated to the Bishop family and their prominence in the area. 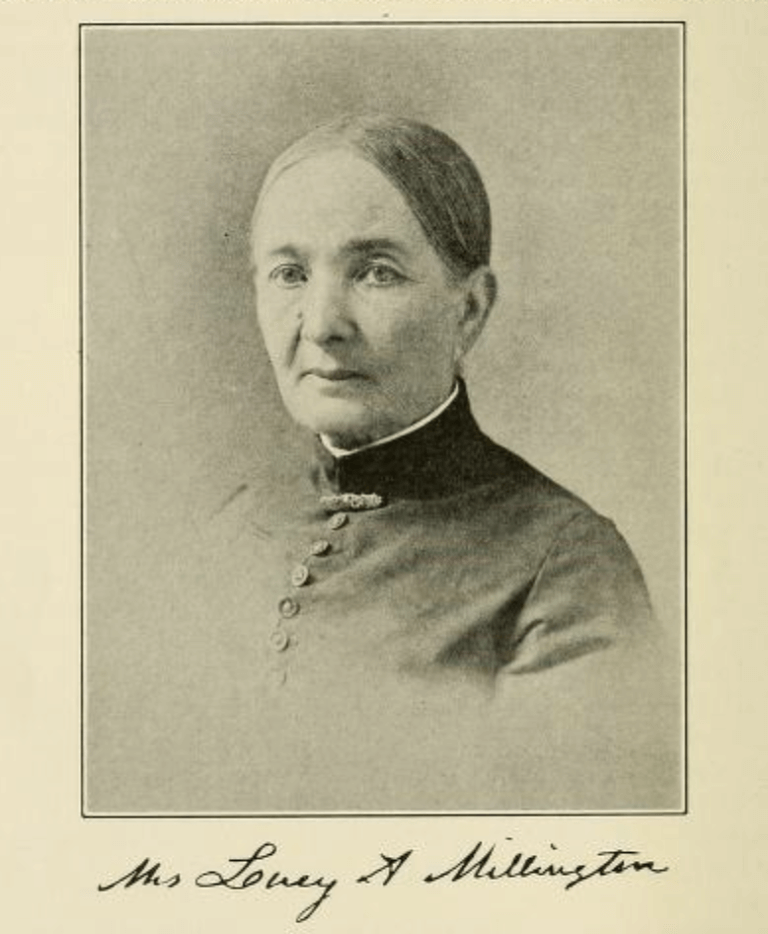