Local lore in the area of Orient, NY says that during the 1750s, Benjamin Franklin installed the mile markers along the old post road in Southold, NY. Later research shows that the markers were installed in the early 1800s, but Franklin’s name has remained linked to the old stone markers. Franklin was the first Postmaster General.

The legend has its origins in a journal entry from a 19th century local historian named Augustus Griffin. A resident of Orient, NY in the 1850s, he recorded a local story that Benjamin Franklin visited North Fork in 1755 to take a ferry to New London for the purpose of visiting his mother. Supposedly, on the way he used a special odometer to measure the road to Southold where he stayed at the inn of Augustus Griffin’s grandfather before travelling on towards New London. Interestingly, no mention of road markers or Benjamin Franklin’s role as joint postmaster for the British Crown were mentioned. (Suffolk Times, 2015)

This became the basis of the idea that Benjamin Franklin himself not only measured the road but installed the mile markers. But certain inconsistencies stood out for local historian Amy Folk of the Oysterponds Historical Society around the year 2014 and 2015. The year of 1755 combined with the claim that Franklin was visiting his mother was the first contradiction which caught her attention. Benjamin Franklin’s mother died in 1752 so even had he visited the town, it was not likely he did in 1755 or on the way to see his mother. (Suffolk Times, 2015)

The next gap seemed to be the location of the stones versus the year Franklin supposedly set them. Even if a date ranging from 1750-1755 was accepted, it would then become necessary to explain why the stones end at the border with neighboring Riverhead. Some claim Riverhead had its own wooden markers which have disintegrated over time, however, Riverhead itself was not incorporated until 1792, two years after Franklin’s death. During the 1750s, the Southold border extended to the Wading River, meaning Franklin’s markers would have suddenly started in the middle of the town. Similarly, the Riverhead post office, which the markers formerly led to, was also established after Franklin’s death in 1794. (Suffolk Times, 2015)

Amy Folk’s investigation into the legend of Southold’s mile markers led her to the discovery of a state law passed in 1829 which mandated the construction of wooden or stone mile markers along postal routes. Using this date allowed her to locate a resolution in the record of Southold’s Town Board meetings which finally revealed the origin of the stone markers. On April 7, 1829, the Town Board of Southold passed a resolution to survey the postal route running from the western boundary of the town to Oysterponds, the former name for Orient and East Marion, NY, and to set up chiseled stone mile markers along it. (Suffolk Times, 2015)

While Amy Folk’s research proved the 19th century origin of the markers, they are still notable for likely being the only complete set of mile stones in the northeast, making them historic in their own right, even without the connection to Benjamin Franklin. 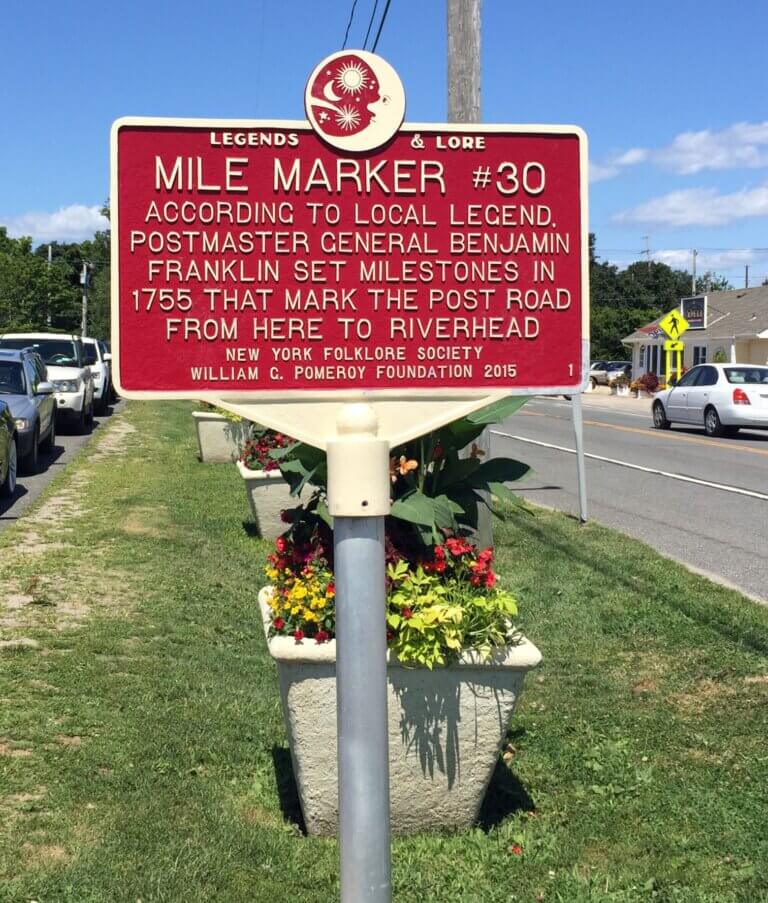 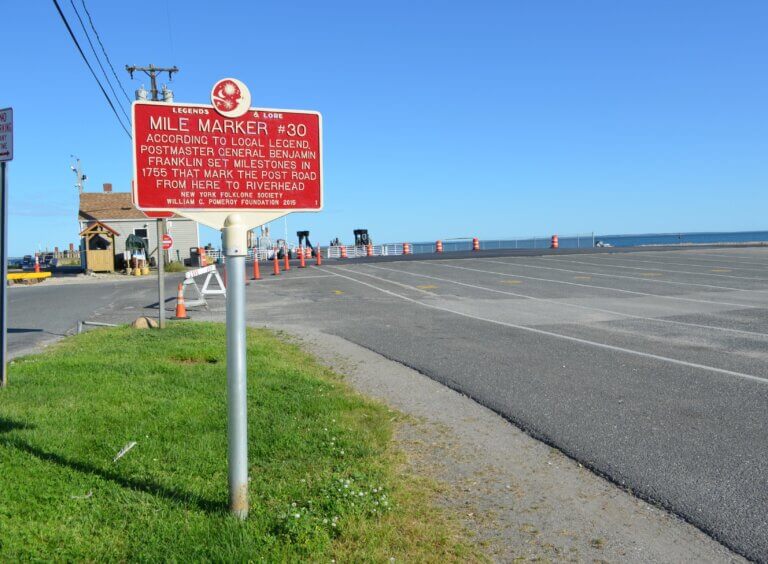