At one time near this site, there was a natural mineral spring that brought fame and regional acclaim to the rural hamlet of Keeseville, New York. As early as the 1870s it was clear that water from this spring was far from ordinary, with many stating that it possessed medicinal properties. From 1914-1942, the water was bottled and sold as Dietade Mineral Spring Water, available flat or sparkling. The drink was advertised as a cure all for a host of aliments from diabetes and indigestion to constipation and eczema. The Dietade Company ceased operation in the 1940s due to increased competition from soft drink corporations. A pavilion was built over the spring before later being enclosed and then subsequently converted into a private residence.

The popularity of springs and the idea that water flowing from them is unique and almost mystical dates back to ancient times. Spring water and its role in how people have perceived the natural world around them is discussed in Wellsprings: A Natural History of Bottled Spring Waters (2005), and it states that some of the earliest uses for natural springs was to connect with various spirits and deities. Such significance was placed on springs due to two factors, with the first being that water was vital to the survival of all people. Following that was the fact that the water also came from within the earth, which was a place that was not easily seen or understood and was therefore “deeply mysterious.” As technology began to advance, however, more was understood about the subsurface of the earth and, as a result, how water moved from the ground down into the lower layers and then back to the surface again in the form of springs.

Once it was discovered where the springs originated from, the mystic properties attributed to the water were no longer spiritual in nature, but rather more centered on healing. With more and more people believing that minerals found in spring water could be used for health purposes, the spring found in Keeseville was soon branded another source for water with medicinal properties. An article in the Essex County Republican from August 11, 1870 states that the spring was discovered in 1824 by a man named Dubartus Willard, who had been trying to dig a cellar. After this discovery, it is stated that the water was “used with many beneficial results in many cases,” and the article reported that it had been sent away and analyzed so that its true composition would be understood.

The tests on the mineral water were stated as being done by two separate men, and the piece from the County Republican relayed the information in an effort to showcase “how confidently the assayers speak of [the water] as medicinal agents.” One of the testers was S. Dana Hayes, who reported back that there were several minerals in the water, including potash, soda, lime, sulfuric acid, and chlorine, amongst others. Continuing with the description, Hayes wrote that the water “in its natural state” was colorless, transparent, and brisk with a slightly saline taste and sulfuric odor. If the water was boiled or exposed to air, then it could become opalescent and deposit a flocculent ferruginous precipitate. The spring was then touted as producing “true mineral water” that had “an unusually large weight of mineral matter” before being compared to the springs found in Germany.

Eventually the spring was bought and, according to an article from the Plattsburgh Press-Republican, turned into the Dietade Spring Company. Published on March 15, 1955, the article stated that the owners were Isaac Merkel & Sons, who promoted the water as being a cure for many aliments, including internal discomforts such as indigestion and external issues such as eczema.

As of 2019, the marker stands in front of the former pavilion that housed the mineral spring. 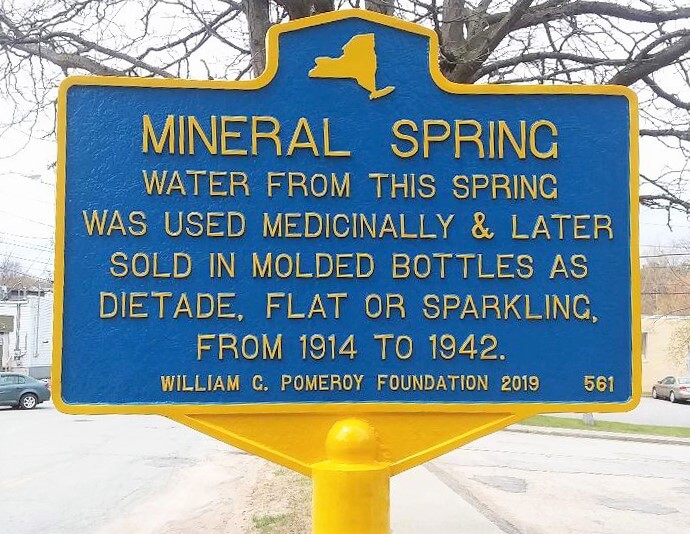 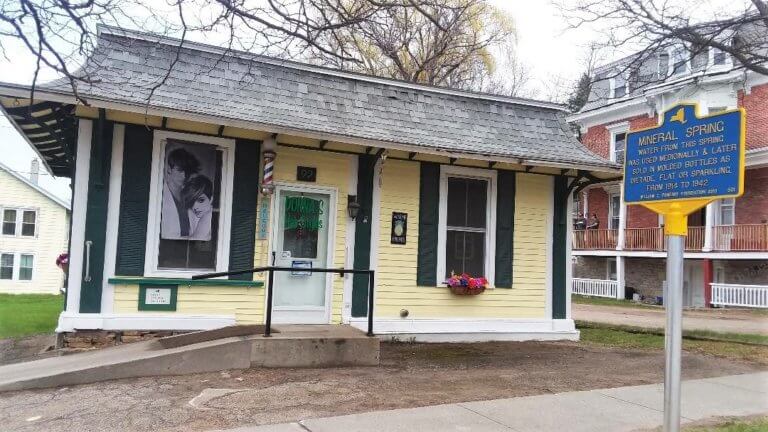