The cemetery includes the grave sites of early Dutch settlers and patriots of the American Revolutionary War. Among the community leaders interred here is Adrian Onderdonck (1726-1794), the first town supervisor of North Hempstead in 1784.

A May 30, 2018 Port Washington News article recognizes the William G. Pomeroy Historical Marker dedication and provides some further history about the cemetery. Town of North Hempstead Supervisor Judi Bosworth pointed out that some of the names of the patriots and early settlers buried there, “aren’t just Port Washington names. You have the Onderdock house and Onderdock street in Manhasset, Schenck street in Great Neck. These were families who had an amazing influence throughout our town.”

Donated to the town of North Hempstead in 1984 by the Monfort family who had maintained it for a century beyond its active use, the cemetery was declared a town landmark on July 23, 1985, and added to the National Register of Historic Places in 1988. The National Register nomination form describes the cemetery as a small, nearly square plot surrounded by tall oak trees. Fenced off and locked, it was not open to the public at the time the nomination was written. The graves are arranged in 13 rows by family. Interestingly, it is also noted that all the headstones face west. The markers, mostly sandstone but for a few in marble, show a variation in styles consistent with their time periods. Eighteenth-century markers are sandstone detailed with “soul effigies”, a tripartite lobed top with a face in the center and other decoration in the wings. By the end of that century and the beginning of the next, the lobed top was plain, the inscriptions began with “In Memory” or “In Memoriam”, and there are at least two marble headstones with the willow-and-urn motif common in neoclassical gravestones from the 1820s on. The last graves, from the late 19th century, are made of unadorned marble, common to that time.

According to the News article, the site is the final resting place of Revolutionary War patriots and signers of the 1775 Declaration of Independence from loyalist Hempstead including Adrian and Petrus (Peter) Onderdonck, Thomas Dodge and Martin Schenck. With 154 internments from 1737 to 1892, the site includes many notable gravesites including: Adrian Onderdonck (1726-1794), who was also the first supervisor of North Hempstead (1784-1786); Dodge (1721-1789), an officer in the American militia; Schenck (1740-1793), former treasurer of Queens County; Hendrick Onderdonk (1724-1809), owner of  what is said to be first paper mill in New York State and the Roslyn Grist Mill; Andrew Onderdonk (1730-1793) a New York State Senator (1796-1797) who was elected over future Vice President Aaron Burr; Petrus (Peter) Onderdonk (1730-1793), an officer in the American militia; Henry J. Onderdonk (1804-1886), a 19th century Long Island historian; and Andries Hegeman (1739-1807), a town official including Overseer of Roads.

Also noted in the News article were the 151 headstones and burial markers in various states of disrepair due to weathering, some damaged sustained by Hurricane Sandy. “One of the projects that we’re going to do right here is a gravestone restoration workshop,” said North Hempstead Town Historian Howard Kroplick. “We’re going to bring in one of the world’s experts on gravestone restoration… [A]s you can see, some of the headstones are down. We’re going to hopefully over time bring them upright and learn how to clean the headstones and footstones.” To this end, a restoration plan was proposed in the December 18, 2018 edition of islandnow.com. Kroplick explained that implementing the next phase of the project would include the removal of plant growth and a site survey, as well as gathering recommendations for treatment and repair of headstones. 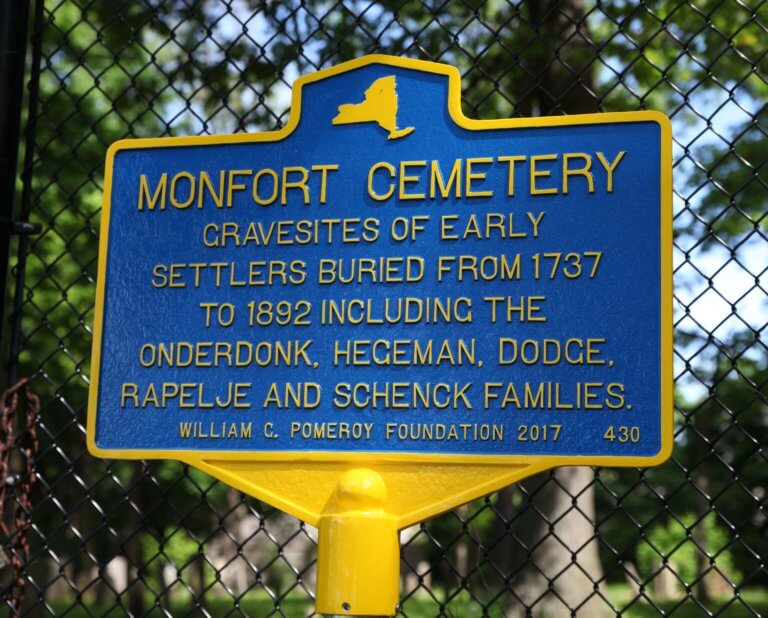