An experimental method of transportation, known as Boynton’s Bicycle Railroad, invented by Moody Boynton, was intended to revolutionize transportation on Long Island. The Bicycle Railroad ran along two miles of electrified track from Hagerman to Great South Bay during the 1890s. It was dismantled in 1904.

Chartered in 1891, the Long Island Boynton Bicycle formed to build and operate a single track railway known as the Boynton Bicycle System of railway. The proposed route was described in the New York State Railroad Commissioner’s Report of 1898 as extending “from Long Island Sound at or near the Rocky Point landing in Suffolk County, to the Atlantic Ocean at a point on the Great South Beach, about midway between Watch Hill and the lifeboat station on said beach.”

The time-saving benefits of the monorail experiment, featured in the Saturday, October 22, 1892 edition of the Suffolk County News, boasted an average speed of “not less than 100 miles an hour can be attained by the bicycle electric road, and at that rate passengers could be landed in Brooklyn forty minutes after leaving Patchogue.”

According to the Scientific American of March 28, 1891, the first models were steam-powered locomotives and were in regular and continuous operation for passenger service during several weeks in the summer of 1890. The first locomotive weighed nine tons, and had two 10 by 12-inch cylinders, their piston rods connected with cranks on either side of a single 6-foot driving wheel. The locomotive’s engineering was further explained in the article as such: “the front of the locomotive was supported by two 38-inch pony wheels, one behind the other. These wheels had double flanges, to contact with either side of the track rail, as also had similarly arranged pairs of 38-inch wheels arranged under and housed in the floors near each end of the passenger cars.”

A December 30, 1904 Suffolk County News article later lamented the dismantling of the “power house and cigar-shaped electric car of the railroad,” “a sad coincident” with the recent passing of one of its founders George E. Hagerman, after whom one of the stations along the monorail, Hagerman Station, had been named. It was as though the closing of the monorail represented the ending of an era—the public transportation trend was increasingly in favor of the electric streetcar or trolley system. 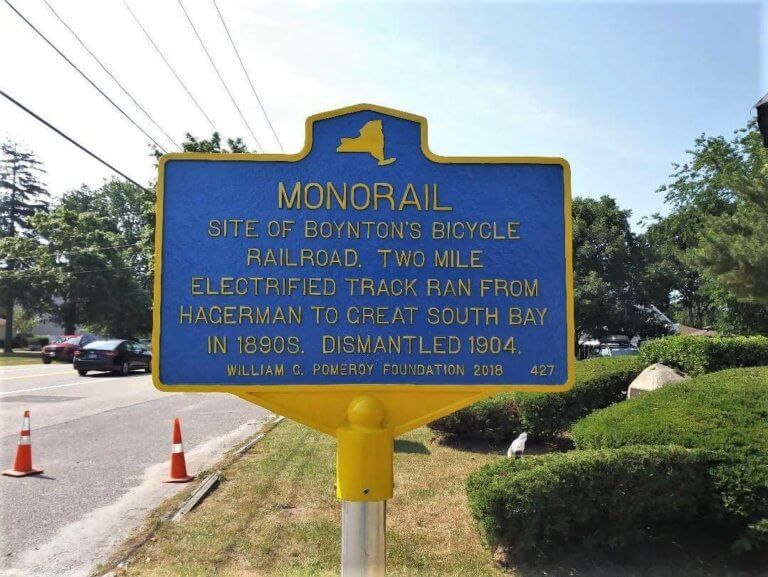