John Moser arrived from Alsace-Lorraine, France in 1834, purchasing this land 20 years later. The farm was worked by three generations of the Moser family before being acquired by the Adirondack Mennonite Heritage Association.

During the early 19th century, the United States experienced an influx of immigrants arriving from Europe with the hopes of achieving the American Dream. Teenage brothers John and Joseph Moser, Mennonites from Alsace-Lorraine, France, chose to settle in Lewis County, NY. They arrived in the U.S. in 1830 (Naturalization Papers, 1844). The brothers’ last name does not appear on the passenger list of their transatlantic voyage, therefore information about their arrival remains relatively vague. Some historians believe that they arrived with the Joseph Farni family who sponsored the trip for the brothers. Others hypothesize that they traveled with Catherine Jansey’s (Jantzi) family and passed as her sons (Strangers and Pilgrims, Travelers and Sojourners, Bangs, 2009). Either way, the Mosers succesfully immigrated to America and eventually settled in Croghan, NY in 1834 (Naturalizations, 1844, National Archives).

Upon arriving, the brothers were indentured servants until winter of 1835-1836. They paid for their passage by promising work to a more affluent family (Stranger and Pilgrims). Due to their financial situation, they arrived in America with only a few items of clothing and one straw hat each (Strangers and Pilgrims). They soon found work threshing grain on a Lowville farm. With that income, the brothers eventually saved enough to purchase passage for the rest of their family, who arrived in America between 1837 and 1840 (Strangers and Pilgrims). They also began to buy land and build a log cabin. In 1854 and 1864, John Moser purchased land that he then utilized it to establish the Moser homestead (First and Second Land Purchase). This land was originally a dense forest but John Moser cleared it for tillable farmland (Stranger and Pilgrims).

As the years passed, three generations of Mosers resided on John Moser’s land.  The 1860 census records confirm that John and his family resided in Lewis County and continued to be farmers.  In January 1901, John Moser died at his home at the age of 87 (The Democrat, 30 Jan 1901). Like his father before him, Philip farmed the family homestead until his death in 1940 (Black River Democrat, 4 Jan 1940). Philip’s son Menno and his wife Veronica were the third and final generation of Mosers to farm the land. In 1988, Menno passed away at the age of 79, leaving the homestead vacant (Journal and Republican, 25 Mar 1988).

In the early 1990s, the majority of the Moser homestead was sold to the Adirondack Mennonite Heritage Association & Historical Society in 1990.The Adirondack Mennonite Heritage Association & Historical Society’s purpose for purchasing the land was to create “a non-profit cultural center and living history museum that seeks to preserve the history and distinct culture of the Lewis County Mennonites and farmers” (“NY Farm on National Historic Register,” Mennonite World Review, 4 Oct 2010).

As of 2019, the Moser homestead was known as the Adirondack Mennonite Heritage Farm and  included a two story home, two English style barns, a granary and a garage. In 2010, the farm was added to the list of National Register of Historic Places. 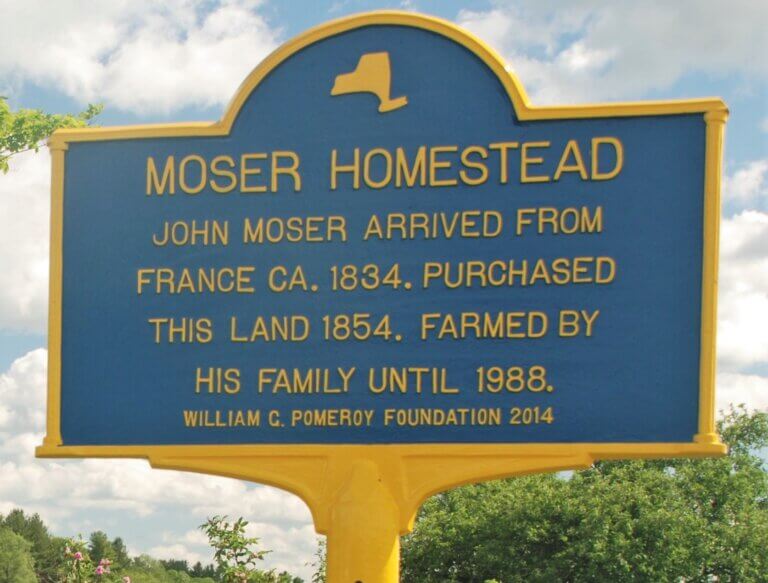 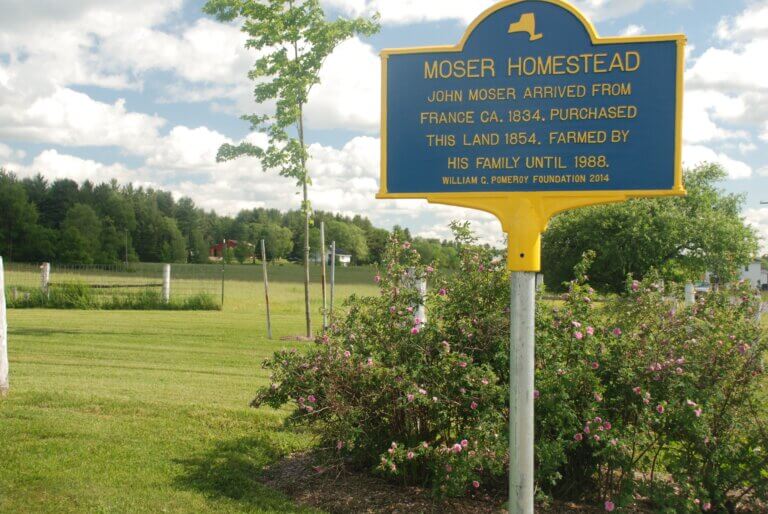