The New York Knife Co. was the first of several knife and cutlery factories in Walden, NY. It operated from 1856 to 1931, marking the shift from handcrafted knives to mass production. The operation, which produced Hammer Brand knives as well as the first Boy Scouts of America knife, went on to employ about 400 workers. The factory site included 28 buildings and was one of the largest producers of pocket knives in the U.S.

Organized in 1852, originally at Matteawan, Duchess County, according to a company history included in Edward Manning Ruttenber and Lewis H. Clark’s History of Orange County, New York (1881), New York Knife was one of the largest cutlery establishments in the United States. Situated on the falls of the Wallkill River, a tributary of the Hudson, they owned the first right to the magnificent water privilege. In 1856 they moved to Walden, purchasing an old cotton factory building, which had been standing vacant for some years. This building had been at various times enlarged, improved, and fitted up with the best modern machinery. In Atlas of Orange County (1903) by A. H. Mueller & Co., New York Knife Company occupies a prominent site along the river, a large factory building on a smaller lot adjacent to a larger lot with no buildings, documenting the river rights referred to by the County history.

Employing 250 workers and manufacturing 1,600,000 finished pieces by 1881, the line of work was described by authors Ruttenber and Clark as “table and pocket cutlery of every variety, style, and value.”  A BladeForums.com post about antique New York Knife Company knifes includes an undated manufacturer’s package which reads, “Wallkill River Works/ New York Knife Co./Incorporated 1852/Manufacturers of Fine Pocket Knifes/Hammer Knives Brand/ Walden, NY/We Guarantee every blade forged and tempered by experienced workmen from extra refined crucible steel made for us.”

New York State Museum’s Cultural Resources Site Examination Report (2002) for New York Knife Company draws from records as varied as the County Atlas referenced above, Sanborn Insurance Maps, various diagrams of jackknifes, archaeological site testing and schematic soil profiles as well as architectural plumbing fixtures to document the site’s history. A brief context statement adds that the company factory operated for a 75-year period in the village of Walden, undergoing five major expansions that served to modernize and reorganize the production sequence for the manufacturing of jackknives and table cutlery. The expansion of the company’s factory was accompanied by an increase in the number of workers, the amount of raw materials used, and the amount of gross product produced. The New York Knife Company continued to operate until 1931, when it was finally forced to close on account of the 1929 stock market crash and the Great Depression.

The transition from hand to mass production of goods contributed to changes in the size and spatial organization of the factories, changes in the size and specialization of the workforce, and the development and rise of the working class. “The details of this transformation, the documentation of the industrial adaptations to the changing production techniques and market demands, and the specific spatial changes within the factory that resulted have been the subjects of investigation at the New York Knife Company factory site” New York Museum explains. 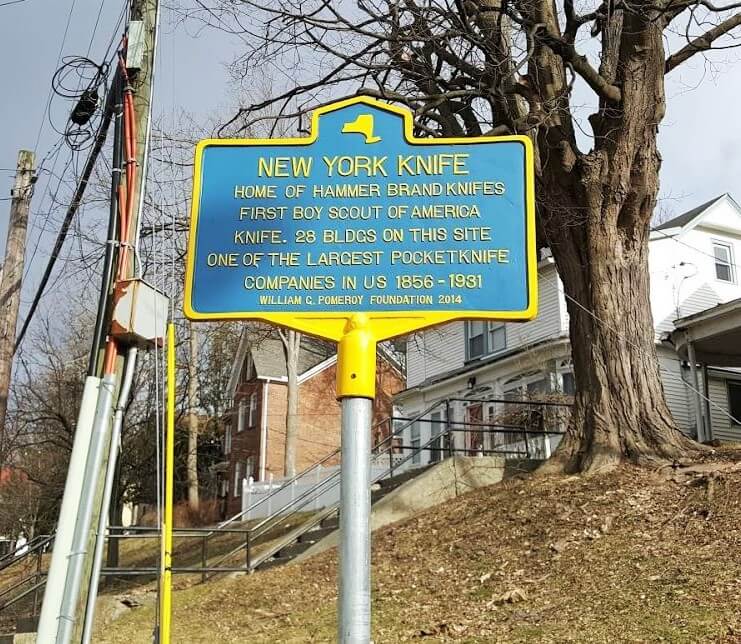