The North family was renowned in the art of painting decorative tinware. They ran a tin shop on their homestead in the hamlet of Fly Creek just 3 miles west of the Village of Cooperstown, New York.

According to Margaret Coffin’s 1974 book, The History and Folklore of American Country Tinware 1700-1900, Stephen North was born in Berlin, Connecticut in 1767 and grew up to be a farmer. In 1788 at the age of 21, he married Susannah Savage. Together the couple had nine children and eventually came to reside in Fly Creek. The couple lived in “a two story Colonial” with “a wagonshed attached to one side of the house” and “in back of the house is a small red building,” which served as  the family store and tin shop (The History and Folklore of American Country Tinware 1700-1900). Most of the family was “involved in tinsmithing, tool making and the like,” per W.D. John’s 1971 book, Ornamented Tray: Two Centuries of Ornamented Trays. Ornamented Tray further details that both Stephen and his son Albert manufactured and sold plain and decorated tin. A 1954 article from the New York History journal entitled “The Norths – Tinsmiths of Fly Creek, New York,” wrote “it is reasonable to believe that all of the girls in this family learned the decorating trade from their mother,” as “a beautifully painted box, signed ‘S.N.’” short for Susannah North, was discovered. Mercy, one of the Norths’ daughters, is credited with being a decorator and painter of tin as well. The Farmers’ Museum at Cooperstown has “a carefully painted bread tray signed ‘Mercy North’ in the bright yellow color found so often in New York State decorations” (“The Norths – Tinsmiths of Fly Creek, New York”).

The North children carried on the family business. Their tin shop was often advertised in local newspaper, The Freeman’s Journal. A September 12, 1825 advertisement reads: “A general assortment of Plain and Japanned Tin Ware, wholesale or retail, to suit the purchaser. Philadelphia stoves also sold. Albert North, Fly Creek.” Another ad from November 5, 1828 announces: “Tin, Sheet-Iron, and Copper job work done in the best manner. Albert North.” The North family continued to post advertisements for their tin shop into the 1860s (“The Norths – Tinsmiths of Fly Creek, New York”).

As of 2020, the North homestead was still standing and part of the Fly Creek Historic District- as recognized by the National Register of Historic Places in 2006. 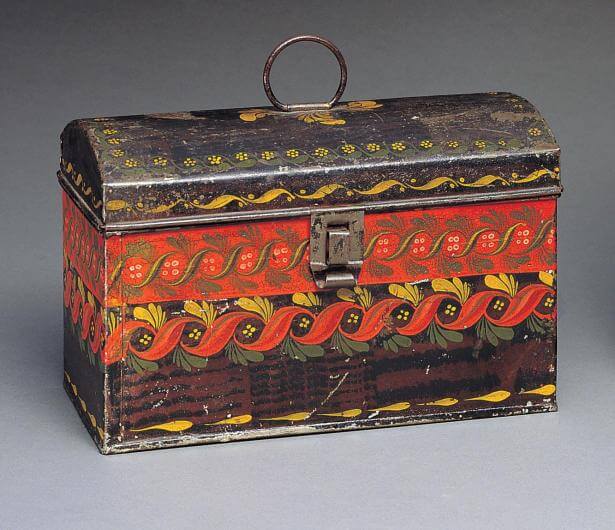