Northville is the former name of the hamlet of King Ferry, located in the Town of Genoa. Evidence shows the name being used as early as 1827.

One of the earliest references to the hamlet of Northville appeared in an 1827 advertisement in the Cayuga Republican, advertising coach rides between neighboring towns. Despite this, the post office located in Northville was called King’s Ferry, as seen on the 1840 Map of Cayuga County, published by Derby, Miller & Co. According to the Elliot Storkes book, History of Cayuga County, New York, published in 1889, the King family were early residents of Genoa. During the early 1800s, this family established one of the first roads to Cayuga Lake, plus a ferry that provided transport across the lake. The ferry terminal became known as King’s Ferry Station, after its founders. Due to the Kings’ development efforts in Northville, when the post office opened in 1807, it too was named King’s Ferry (History of Cayuga County, New York). When sending mail to this hamlet it was often addressed as “Genoa – Northville, Cayuga Co. Kings Ferry PO” (Letter to Henrietta Bradley, 18 Aug 1852).

Northville was home to “three churches, (Presbyterian, Episcopal, and Catholic) a district school, two general stores, one drug store, one shoe shop (kept by O. F. Kendall), a harness shop (kept by James Detrich), a hardware store and tin shop, a blacksmith (kept by Ossian King), one hotel (kept by R. J. Drake, and built in 1849 by Captain David Ogden and D. Adams & Son, on the site of one built by Samuel Chadwick in 1814, and burned May 30, 1844), and a population of about 300” (History of Cayuga County, New York).

By the dawn of the twentieth century, maps and local newspapers began to refer to Northville as King Ferry instead. This is evidenced by the 1904 The New Century Atlas of Cayuga County, New York, where the hamlet is labeled as King Ferry. 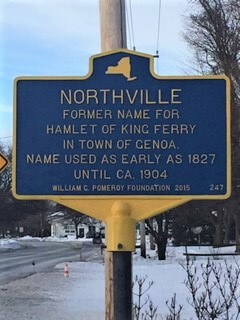