Between the mid to late 19th century, less time was required of the upper class for work, leading to more time for leisure and other pursuits. As a result, the arts, and their patronage by the well-to-do, flourished. The Academy of Music, which opened to the public in 1875, fell into disrepair over the years and was “condemned as a menace to public safety in 1893” (Oswego County Historical Society Journal, 1947). One man’s menace is another man’s opportunity, as displayed by local businessman, Maxwell Bennett Richardson who saw an opportunity to open a theater in Oswego that would host theatrical productions, movies and concerts for the public. An Oswego Daily Times from January 24, 1895 confirms that the Richardson Theater opened for business that day.

Maxwell Bennett Richardson was born in Oswego in 1838. He attended Union College where he earned both a Bachelor of Arts degree and a Master of Arts degree (Oswego County Historical Society Journal, 1947). Richardson continued his education into graduate school. He studied law and was admitted to the bar in 1861 (Oswego City Directory, Oswego Public Library Archives, 1902). Soon afterwards, Richardson entered local politics where he was elected Mayor twice – first in 1866 and again in 1888. He became a real estate mogul and for a while he was “the largest individual taxpayer in the city [Oswego]” (The Daily Palladium, 3 Jul 1903).

An announcement in the Oswego Daily Times on January 24, 1895 stated that the theater’s first opera, Robin Hood, would be performed that evening to mark the official opening. Before the curtain rose, Maxwell Richardson proclaimed in his opening remarks: “I have always felt that an Oswego county audience was worthy of a theatre, as beautiful in architectural design, apportionment and finish as money could build…I have given you the best that my means could afford” (Oswego Palladium Times, 14 Dec 1944).

In the years to follow, many theatrical productions performed at this new venue. Salome, The Birth of a Nation and Yankee Doodle in Berlin were just a few of many shows to grace the large stage (The Fulton Patriot, 21 Nov 1917, 4 Dec 1918 & “Oswego County Historical Society Dedicates”). Ethel Barrymore, a well-known actress often regarded as “The First Lady of the American Theatre,” starred in Mid-Channel at the Richardson Theater in 1910 (Oswego Daily Times, 23 Sep 1910 & The Cambridge Guide to Theatre, Martin Banham, 1995). Unfortunately the momentum was not to last. Business slowed in the 1920s and the 25 year old theater was in desperate need of repairs.

A December 1944, Oswego Palladium Times article announced that the theater was to be “wrecked.” Maxwell Richardson passed away in 1903 and left his entire estate to his brother, Lawrence (The Daily Palladium, 3 Jul 1903). This mattered little to the fate of Richardson Theater since Norman L. Bates, Richardson’s nephew, was the owner of the theater in 1944 and made the decision to knock down the building (Oswego Palladium Times, 28 Apr 1944).

As of 2019, the site of the Richardson Theater was home to the Oswego Education Center. 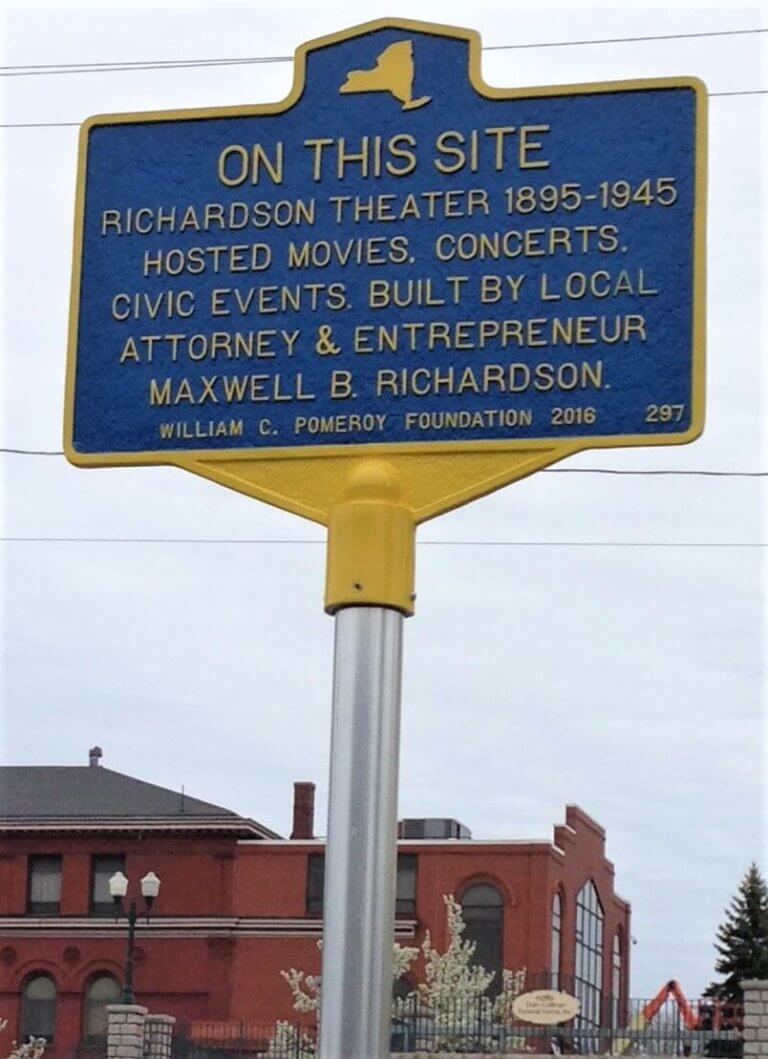