Before education was mandatory in New York State, many counties and churches built school houses for primary education. The passage of the “Act to secure to children the benefits of elementary education” on May 11, 1874, required parents to enroll any children under the age of 14 in primary education under penalty of fines and possible loss of custody if they consistently refused to comply with the law. The act also prohibited the employment of children between the ages of 8 and 14 years old during any school hours. (Laws of the State of New York, 1874) This further spurred the construction of many schools. Due to the lack of infrastructure and the more basic curriculum of the time, schools did not start off as the centralized K-12 school districts we know today. Instead, one room schools with a single teacher instructing a mixed-age group of students were the norm. Sullivan County constructed a number of one room school houses beginning in the mid-19th century into the early 20th century, and in 1900 the county was one of the few in New York State that received more money from the state government for education, $24,430, than it paid towards the state. (Sullivan County Record, 1900) Most of these schools closed in the 1940s or ‘50s as modern school districts were consolidated.

The Carman School was named after one of its first trustees, Philip S. Carman. The original deed recorded that the Trustees of School District #15 of the Town of Thompson purchased the site in 1851. According to a former student, the school burnt down in 1937 and was rebuilt in 1938. Its last teacher was Mildred Klein Drutt when the school closed in 1942. In 1957, the trustees of the former School District 15 and Central School District 1 of Thompson sold the property for a nominal sum to private owners, according to a deed from that year. 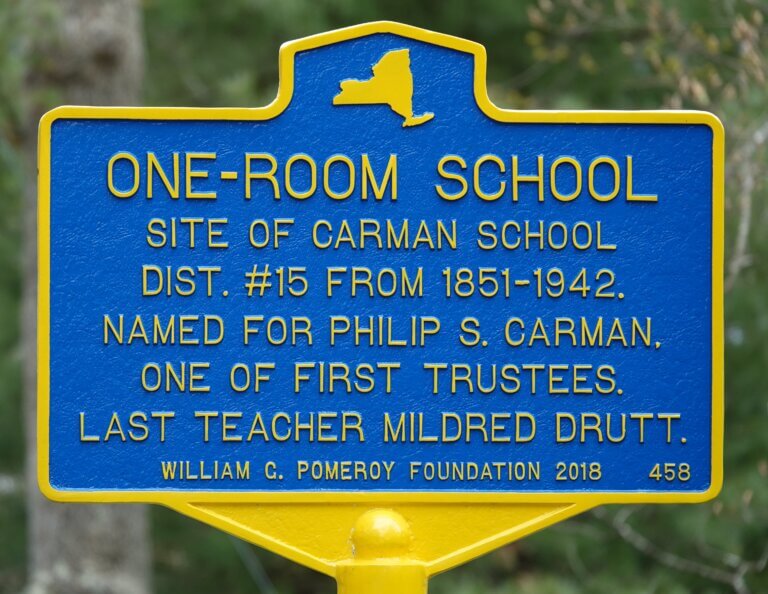