The Palatine Trail followed a Native American footpath and was used by many Palatine German refugees on their way to lands in the Schoharie Valley in the 1700s. By 1767, many homes were built along the Trail, including the area that became the Town of Knox.

The existence of both Native American and European settlements has been found and recorded through a small excavation in the valley. The Daily Star from Oneonta, New York published an article in 2012 that covered an archaeological dig in the Schoharie County community of Central Bridge, and in it, discussed the unearthed evidence. According to an archaeologist from the dig, there was a lot of material found which provided “information on how the people of the Schoharie Valley…subsisted and what the settlements were like.” The evidence includes objects that date occupation as far back as 4,000 B.C., as well as objects linked to early European immigrants.

Along with the physical evidence of the occupants of Schoharie Valley, a book by William E. Roscoe titled History of Schoharie County (1882) discusses the people themselves. In the book, Roscoe claims that “[u]ndoubtedly the whole territory of the present County, was occupied by…the Delawares, Stockbridges, Mohegans, Narrageansetts, and many others.” These tribes were said to have used a path from the Schoharie Valley to the Hudson River near Catskill, a path later adopted by the European immigrants.

Known as the Palatines, the European immigrants came from a German territory known as Palatinate. The History of Schoharie County has the first group of Palatines arriving in Ulster County, New York on June 29, 1709 to escape war between Germany and France. According to the History, England saw the displaced Palatines as potential workers for their territory in America and offered them land in exchange for work. That first wave of immigrants were said to have been so successful a second group had been organized, and in 1710, they arrived in Schoharie County. The History of Schoharie County then describes how the immigrants adopted the path used by the Native Americans as a way to move directly through the area instead of having to go through Albany.

The area would continue to draw in immigrants, and this is evident from the maps covering the area. A map of northern New York from 1758 shows how the Palatine Trail runs directly through where the Town of Knox would later be located but indicates a lack of settlement. Later, a survey map of Knox from 1787 shows just how much has changed because the region appears to be populated. The map shows land that has been parceled off and farmed by Palatine Germans, many of whom still have descendants in the area. 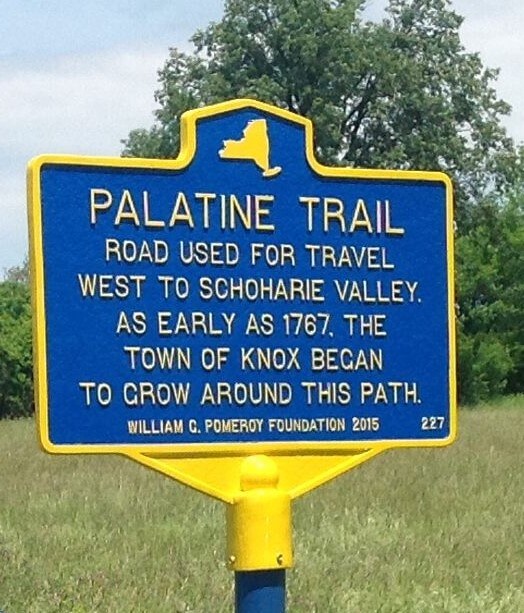