Mills were established in this location to take advantage of water power from the Hannacrois Creek, helping the local community to grow. After the land was bought by Ephraim Andrews, the mills built on site evolved over time to suit the needs of the growing Town of Coeymans and follow the trends of the country’s markets.

The land was first owned by a man named Casperus Ackerman, and by September 1792, it was recorded by land deeds that he owned 154 acres on the north side of the Hannacrois Creek. After passing away in 1815, ownership of the land was in contention, and in 1818 Ackerman’s widow, Elizabeth, was sued in the Court of Common Pleas by a man of the name Jesse Smith, his wife Elizabeth, and “the heirs of Casperus Ackerman.” The suit was eventually brought to a close after all land that was not part of the widow’s dower had been partitioned off and sold. Ephraim Andrews ended up with Lot 4, which he had purchased for $1200 and was around 26 acres.

With the land ideally situated on Hannacrois Creek, Ephraim joined the wool production market with water powered cloth dressing and wool carding mills. Both mills were part of the beginning stages of wool processing, and, according to the Woolmark Company’s website, it followed the very first step of actually shearing the sheep. Since the wool was coming directly from the sheep, it was necessary to send the fleece through the cloth dressing mill to have it cleaned. The cleaning process is known as scouring, and it requires to the wool to be run through some type of solvent that can dissolve the grease and dirt. After having been scoured, wool is then sent through a carding mill, which detangled the wool, separated it into individual fibers, and prepared the strands for spinning.

By 1850, the mills were in possession of John E. Andrews, who choose to expand and convert them into a straw paper making mill. The conversion to a straw paper mill came in the midst of a global search to find the most efficient and cost effective way to produce paper. An article entitled “Changes in Print Paper During the 19th Century” (2010) states that in addition to straw, mills were also experimenting with paper made from linen rags, manila, and wood pulp. Straw was introduced as an alternative after 1827, when a farmer from Meadville, Pennsylvania had been making potash and took notice of the pulp produced by straw crushed in the process. The pulp was then taken to a nearby paper mill, run by John Shyrock, “where it showed great promise” as an alternative to other paper-making processes. While straw only has 35% cellulose content, when it was mixed with linen rags the durability increased enough to be used as wrapping or sack paper. Due to the seasonal availability of straw, many mills that produced straw paper also worked with manila paper that could be made from things such as rope, yarn, or burlap.

The mill ended up burning in a fire in 1892, and an article by HudsonValley360 published on August 16, 2017 states that all that remains is a lone brick chimney. After the mill, other businesses and private residences tried to reclaim the property, but the site has been vacant since 1987. The article continued on to report that as of 2017, the chimney was undergoing a process of restoration and that the stone used in the process will be coming from the quarry that provided the original materials when the chimney was first built. 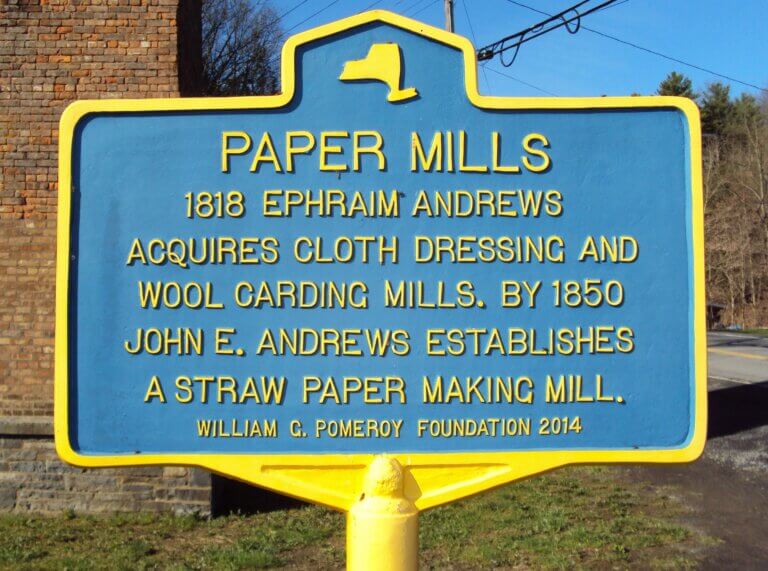 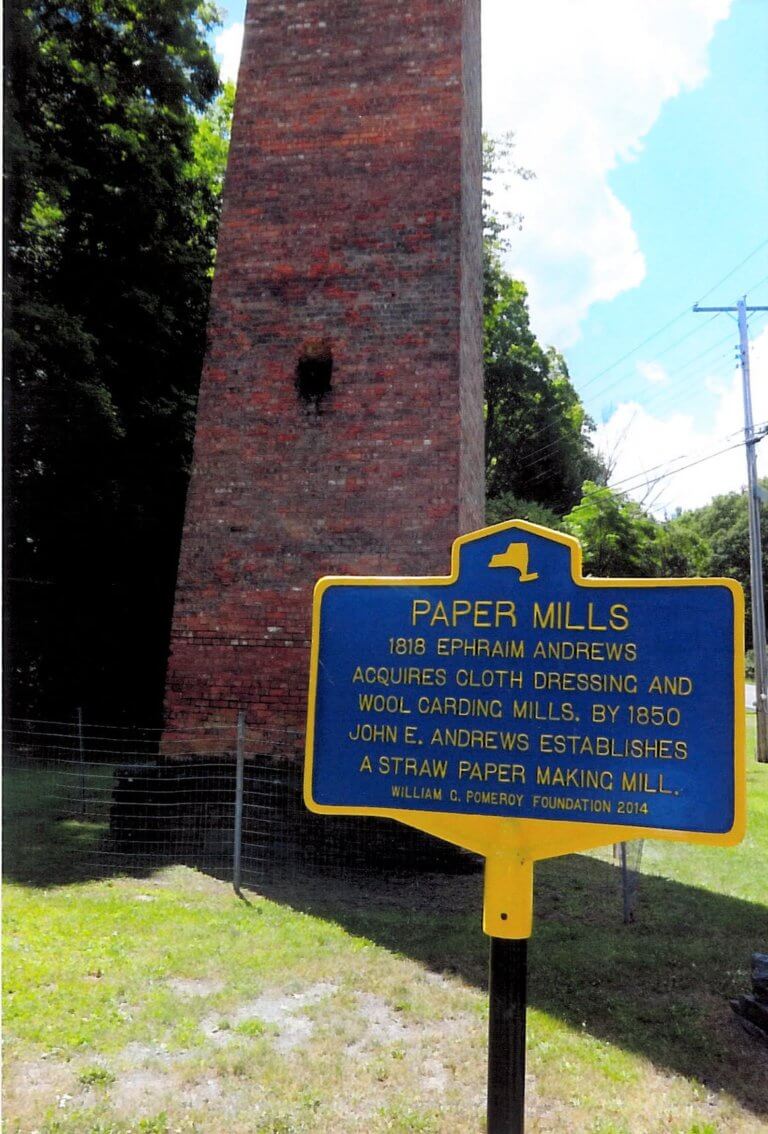