Born in 1789, Peter Wheeler escaped slavery in 1806 and settled near Spencertown around 1825.  He went on to publish an autobiography about his experience as an enslaved person entitled Chains and Freedom in 1839.

Wheeler’s story was written down and recorded by Charles Edwards Lester, an abolitionist who Peter befriended in Spencertown. In a preface to the book, the two state that their goal in sharing Wheeler’s experience as an enslaved person was to contribute “to the freedom of enchained millions.” It is also clearly stated that while Lester was the one who technically wrote the book, the narrative “was taken entirely from the lips of Peter Wheeler.” Lester also makes sure to point out in the preface that Wheeler’s story is supported by the “hundreds of living witnesses” that have gotten to know him over the years and heard the stories for themselves.

Wheeler began his story in Chains and Freedom by stating that to the best of his recollection, he was born January 1, 1789 in Tuckertown, New Jersey. Since he was young, his mother told him stories about how his great grandfather was born in Africa. As the story goes, Wheeler’s great grandfather was picking up seashells on the beach along with his sister when a small boat with white sailors came and captured them. They were then put on a ship along with other Africans that had been taken, and when they landed in Baltimore, the two were sold at auction. Wheeler stated that his mother was freed in her former owner’s will, but after his birth, he was taken by a white family, the Mathers, who had just lost a baby that had been the same age as him. The mother had originally wanted Wheeler so she could have a baby to nurse. When Wheeler’s mother asked to have him back, the woman said no.

After that, Wheeler would continue to live with Job Mather and his family, and while he was with them, he would do things such as the laundry, cooking, and carrying dinner out to field hands. He said that he always had enough to eat, and he told stories about how close he was with one of the sons named John, stating that they were “always together, and always in mischief.” When Wheeler was 11, Mrs. Mather died, and he said that “when [he] see her laid in the grave it broke [his] heart.” Once she died, Wheeler said he “had nothin’ to expect from master” and he was “left in the world friendless and alone.” Soon after the death, Mr. Mather put his entire plantation up for sale, and despite the fact that Wheeler “was free by law,” he was sold for $110 to a man by the name of Gideon Morehouse, who took Wheeler out to western New York State.

Gideon Morehouse proceeded to be extremely abusive to Wheeler, and all of the stories he told about his time with Morehouse described how he would be beaten, whipped, and neglected. At one point, Wheeler was taken “down with the typhus fever” due to the fact that he was “exposed, and abused, and whipped, and almost starved and frozen to death, through the winter.” Wheeler continued on to say that there was a period of five years where he believed that his wounds never healed due to the constant beatings he had received. Despite this, Wheeler bided his time before his escape, stating that he been planning to run away for three to four years, and when he finally decided to leave, he stated he would rather be free “or die in the cause.”

Wheeler finally made his escape one Sunday in 1806, and as he left, he traveled down from the area around Oneida Lake to southern New York where he met a boat captain. From that point, Wheeler documented his time as part of a ship’s crew, and states that once he got back to New York City, he began to work different jobs to make money. Wheeler was at one point engaged to be married to a woman by the name of Solena Nixon, but she tragically died suddenly in his arms, leaving him heartbroken. In response to this, Wheeler began to wander, and as a result, meet a woman who wanted him to track down the husband that left her. Wheeler states that looking for that man brought him to Spencertown, where he stayed to live and work, eventually recording his story with Charles Lester.

As of 2019, the marker was located near the area where Peter Wheeler was believed to have settled. 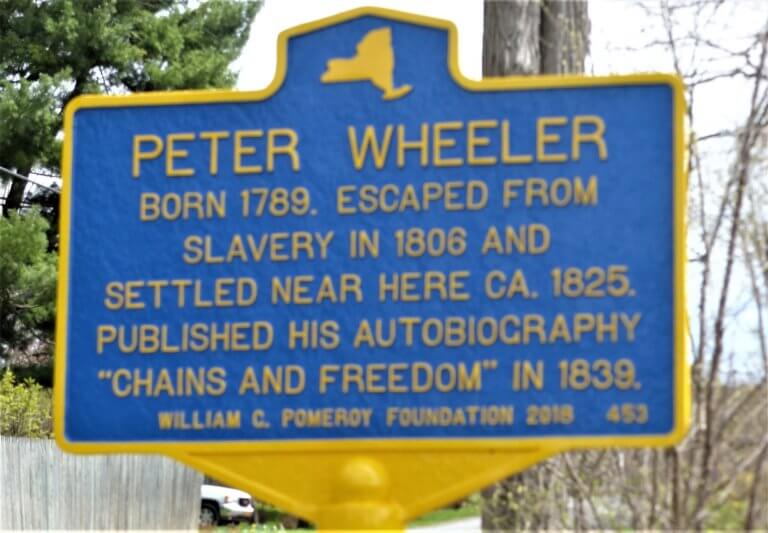 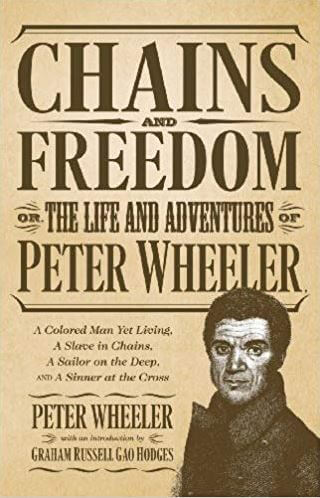