The Phelps-Field Cemetery is located in the Town of Taylor, New York. It is a private burial ground where many early residents are interred, including veterans of the American Revolution and the Civil War.

According to Cortland County records, the first burial was for Clara “Clarry” Ackley Harvey, who died on March 1, 1828, at the age of 42. In 1920, Almira Cole Phelps, passed away at 80 and was the last to be interred in the old burying ground.

The Phelps-Field Cemetery serves as the final resting place for Revolutionary War veteran Edward Hedger. According to his pension payment schedule records, Hedger was born around 1752 and served as a private during the war along with other New York State troops. As stated on his headstone, he passed away on February 18, 1841 at the age of 89 (Findagrave.com, 2019).

Civil War veteran Henry Mudge is also interred in this cemetery. Mudge was a 23 year old farmer when he enlisted in Cortlandville, NY as a member in Company E, New York 10th Cavalry Regiment in 1864 (NY Civil War Muster Roll Abstracts, NYS Archives). He served for a year and then was discharged for disability in 1865. He was buried here in 1905.

While no one has been buried in the cemetery for some time, it remains a historic fixture in the community and among local residents. 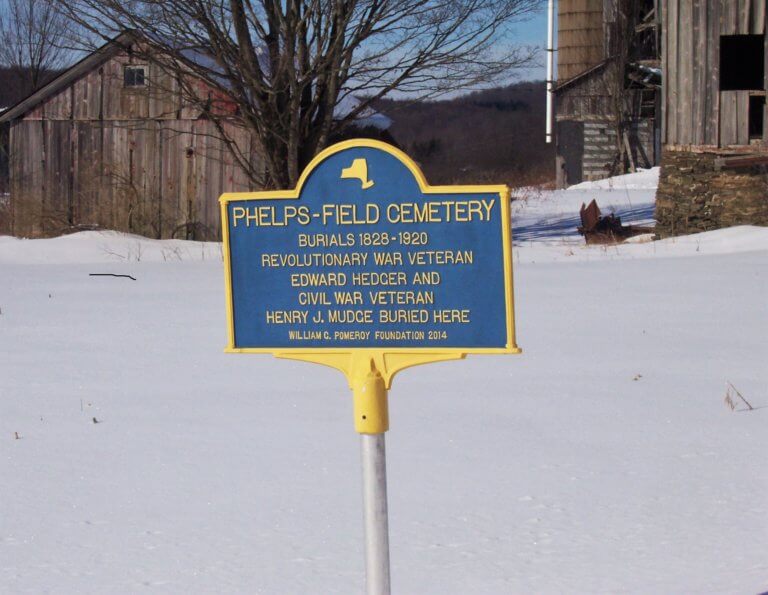