The Unkechaug Indian Nation was recognized by the State of New York in 1777, a sovereign relationship which continues into 2019.  This led to the creation of the Poospatuck Reservation, located one mile south at the Forge River and Poospatuck Creek. In Algonquian, Poospatuck translates to “where the waters meet” and Unkechaug translates to “people from beyond the hill.”

William Wallace Tooker’s Indian Place-Names on Long Island (1911) describes Poosepatuck as a northern part of Mastic Neck, where a small creek empties into Forge River. Here lives a “small remnant of the tribe known as Unkechanugs [sic].” The author also notes that the William Smith Deed of July 2, 1700 grants the “Indian natives of Unquachock… one hundred akers [sic.] in Mastic Neck fifty acres at pospatou, ffifty [sic] acres at Constbles [sic] Neck, and ten acres at qualican.” Variants of Poospatuck are Pusspa’ tuck and Pusspa’ tok, 1794; Poospatuc, 1845; and Poosepatuck, 1888, meaning “little river falls,” or where a “little river falls nto [sic] tide water.” Tooker believes an ever better etymology would be “union of two rivers and a fall into tide water,” or where “a cove or creek bursts forth, flows out.”

The Reservation’s website history adds that 1500 acres of land had been retained by the Unkechaug, originating from a 17th century land agreement with the King of England. In 2019, the original allotment exists as 55 remaining acres; nevertheless, the affinity of the people to the land is described as “as strong as in the past, if not even stronger today.” Of the total population of 450 tribal members, families, and extended family, approximately 250 reside on the Poospatuck Reservation. The Unkechaug Nation explains that it is faced with a rate of population growth greater than the national average and an increased demand for tribal services. While housing is a priority, efforts to expand housing for tribal members are blocked by a lack of land. The Unkechaug are committed to increasing the land base in order to meet the needs of their members.

The language spoken on Long Island and in southern New England are both part of the Eastern Algonquian language family. The Unkechaug language shares a vowel pattern with such northern New England languages as Abenaki and Micmac. Interestingly, Thomas Jefferson collected the most extensive surviving vocabulary from Unkechaug speakers during his northern tour 1791. Although his notebook was later intercepted and partially destroyed in freight, according to Dan’s Papers, an online editorial on Long Island, working from the Unkechaug vocabularies that survived, East Hampton historian Morton Pennypacker made copies which can be found in the Long Island Collection of the East Hampton Library. Of Jefferson’s 202 words, according to the Reservation history, only eleven verbs were recorded, the rest being nouns and numbers. The nouns included names of animals, plants, parts of the human body, gender, natural phenomena, religion and geographic features. 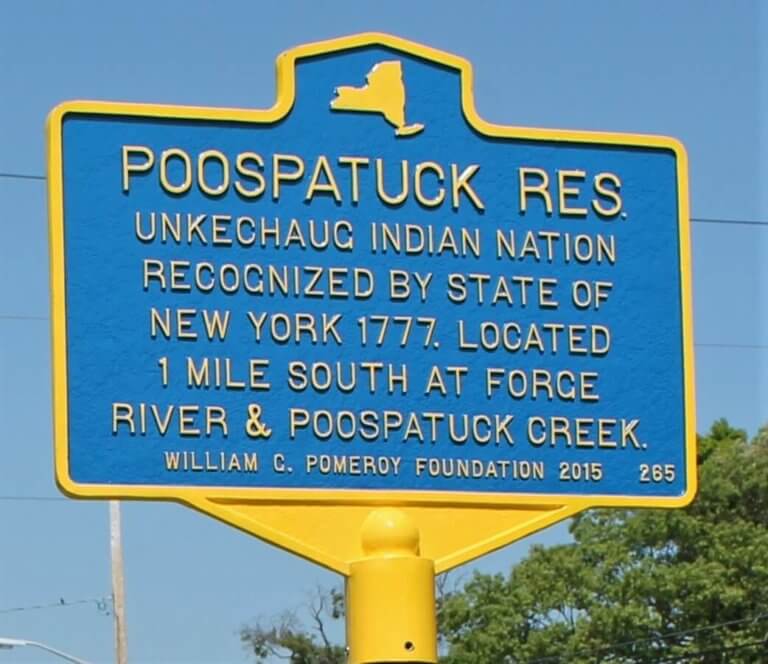