Built in 1777, the Pratt House was the home of local leader and veteran of the American Revolution, Col. David Pratt. At a time when Columbia County was still a part of Albany, Pratt chose to fight on the side of the Continental Army and protect the county from neighboring Tories (American colonists who supported the British). Pratt also served to help establish rights to the land for settlers that were caught in a border dispute between New York and Massachusetts.

Before the onset of the Revolutionary War, men from Albany County joined together to form what the History of Columbia County, New York (1878) called “committees of safety.” The groups began forming in 1774, and by 1775, they had come together to form one large committee that was dedicated to protecting American colonists from the Tories. When forming the committee, the men created a document stating their grievances with the British government and declared their loyalty to the Continental Congress. Dated February 24, 1775, the document noted the displeasure the men had with excessive taxes Britain was trying to impose, stating they did not appreciate the government trying to “raise a revenue in America.” The men of what was then Albany County were also “shocked by the bloody scene in the Massachusetts Bay,” referring to a violent encounter between American colonists and British soldiers known as the Boston Massacre.

While many supported the document and the men’s willingness to fully support the American colonists, the History stated that there were still many loyal to Britain that those in the county had to contend with. Described as “adherents of the king and haters of the cause of the people,” many in the county felt it was necessary to establish protection against the Tories that were said to have “hesitated at no crimes…not even murder.” As part of a company that was established to help protect the American supporters, Pratt most likely participated in many activities to protect settlers in the area, including night watches. One record of a night watch stated the men arrived at the designated guard house by 8 P.M. so they could begin their rounds right at 9 P.M, at which time they would patrol the surrounding area until 5 A.M. Protocol for spotting someone while on patrol included calling out three times, and if there was no response or the person began to run, the men were allowed to fire.

After the war ended, Pratt settled in the house that he built in 1777 and eventually became involved with the movement by settlers in the area to gain rights to their land. The land that Pratt and many others had decided to live on was originally given over in a deed by a group of Native Americans, and according to A Short History of Austerlitz by Town Historian Tom Moreland, most of the 20,725.5 acres of land would eventually become the Town of Austerlitz. Pratt built his house in an area that became known as Spencertown, and from that home, led a petition for New York to acknowledge the settlers rights to the land. Before the petition, the land had been involved in a dispute between New York and Massachusetts where they both claimed the area as part of their territory. New York was able to settle the claims in their favor in 1773, but in the process of doing this, voided the original deed given by the Native Americans and leaving the settlers without a claim. It was not until 1793 that Pratt and others from the area were able to have legislation passed that gave the claim “to the respective possessor or possessors” of the land.

As of 2019, the marker stands in front of Col. David Pratt’s house, which is stated in “A Short History of Austerlitz” as being one of two houses along Route 203 built in the 1760s and 1770s. At the time the two houses were constructed, it was common for settlers to begin with log cabins and then move on to more substantial “frame structures” as soon as possible. Pratt’s house and the other surviving home were different in that they were “far more substantial than any likely pioneer dwelling” and represent a different type of lifestyle for the time. 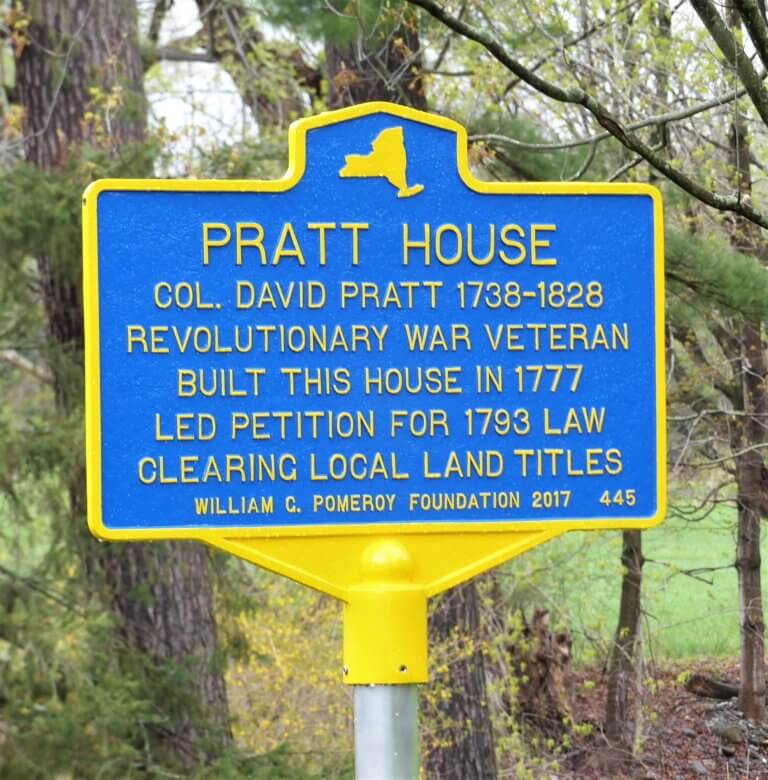 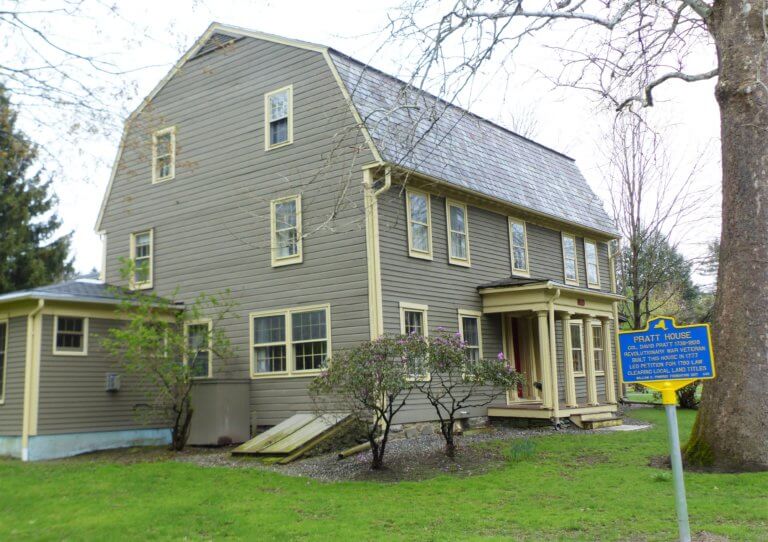