Prospect Hill is the burial site of Peter Clarke, a prominent early resident of the area. Clarke was devoted to promoting salt manufacturing and expanding transportation in New York State by way of the Montezuma Turnpike and Erie Canal.

Elliot Storkes’s 1879 book, History of Cayuga County, New York relates how Clarke first arrived in Montezuma. He was born in Milford, Connecticut on July 15, 1773. He ventured 300 miles northwest to Montezuma during the beginning of the 19th century due to its proximity to salt springs in the area. According to a Cayuga County deed dated February 1, 1808, Clarke purchased large plots of land in Montezuma from Israel Smith, worth $10,000. On this land he chose Prospect Hill, overlooking the valley and its waterways, to build a house for his family.

Clarke’s role was not limited to that of just landowner. He was involved in a number of civic and commercial interests, such as the Montezuma salt works. A October 7, 1829 The Geneva Gazette article listed him as a person to contact if interested in that business. Clarke was interested in discovering ways to expand transportation across New York State by way of the Montezuma Turnpike and Erie Canal. He was listed as a director of the Western Passage Boat Company, a passenger boat service that operated between Utica to Rochester to ferry passengers along the Erie Canal. According to a notice in The Gazette published on April 7, 1819, Clarke served as Secretary for the Montezuma Turnpike and Bridge Company.

Clarke passed away on May 31, 1858 in New York City. He was interred in the Clarke family cemetery, Prospect Hill Cemetery, located on their property in Montezuma. Approximately six acres in size, it was “beautifully situated upon the hill-side a little south-east of the village” (History of Cayuga County, New York). The family erected a marble monument within the cemetery with a list of family members inscribed on its face.

According to a Cayuga County deed dated February 8, 1939, the Clarke family gave the Prospect Hill Cemetery to the Town of Montezuma. 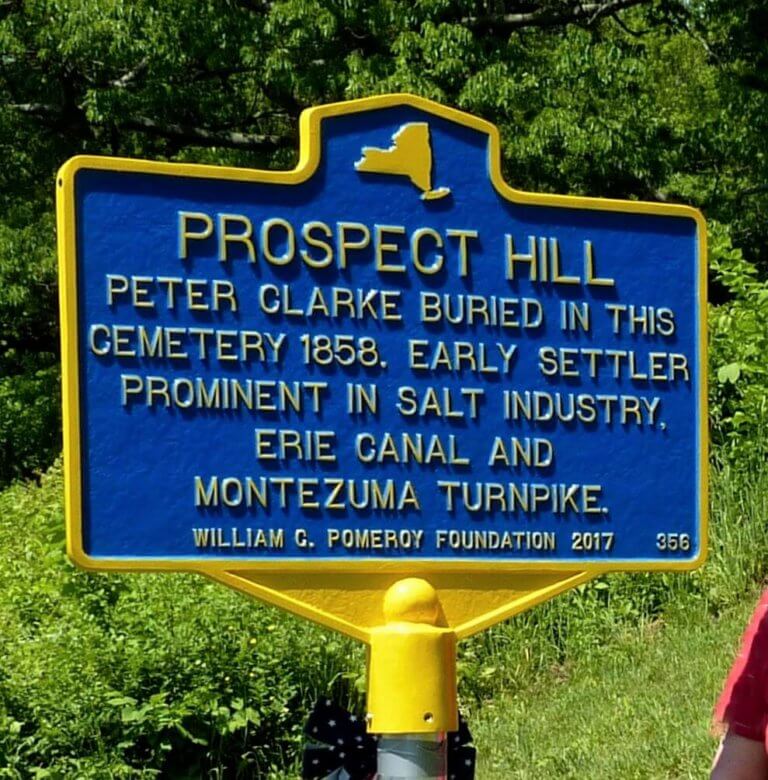