During the early 1800s, the Black River Valley in upstate New York was extremely fertile. To take advantage of the resources it provided, early homesteaders petitioned for a canal that could be accompanied by a railroad; their goal being to expand the lumber and tanning industries (“Opening the Western Adirondacks,” St. Lawrence County Historical Association Quarterly, James D. Carl, 2009).  At the time, New York State did not have an east to west railroad in the upstate region.

Construction for a canal from Rome to Boonville began in November 1837 and was completed in 1850. Still lacking a railroad in 1866, George Gilbert of Carthage, NY submitted a bill to the state legislature.  He desired “a company that would construct a railroad from Carthage to ‘some point on the Oswegatchie River, at or near Harrisville, in Diana, Lewis County’” (“Opening the Western Adirondacks”). The railroad bill soon passed but it lacked the requirements for purchasing land. As a result, the government bonded taxpayers. Aiming to complete at least 20 miles of track from Carthage to Harrisville they estimated the cost to be around $100,000, not including the cost of rails (“Opening the Western Adirondacks”). They soon settled on a 38 mile track ending in Jayville, NY. Black River and St. Lawrence Railroad began construction on April 30, 1869.

Construction came to a halt a year later due to litigation. Disappointed with the current length of the railroad, neighboring towns began searching for another company to pick up where the others had left off. It was not until 1885 that Black River and St. Lawrence Railroad handed over the road to the Carthage and Adirondack Railroad Company on the condition of its completion (“Opening the Western Adirondacks”). The man responsible for finishing construction was Bryon Benson, an upstate New York native who made his fortune in the oil business in Pennsylvania. Benson recognized the benefits of having a railroad in the Black River Valley and became the President of Carthage and Adirondack Railroad. Construction resumed in 1883. Due to a surplus in funds the company was able to lay steel rails instead of wood (“Opening the Western Adirondacks”).  By January 1887 the railroad was complete.

In a January 26, 1887 newspaper article for The Watertown Re-Union, “traffic over the Carthage & Adirondack railroad, since its completion, has been greater than was anticipated by the company.” The railroad transported lumber, ore and passengers throughout the river valley. As a result, a depot at the Harrisville location was constructed for freight and passenger services. This new form of transportation caused industries to boom among the many small towns that lined the railroad (History of Lewis County, G. Byron Bowen, 1970). 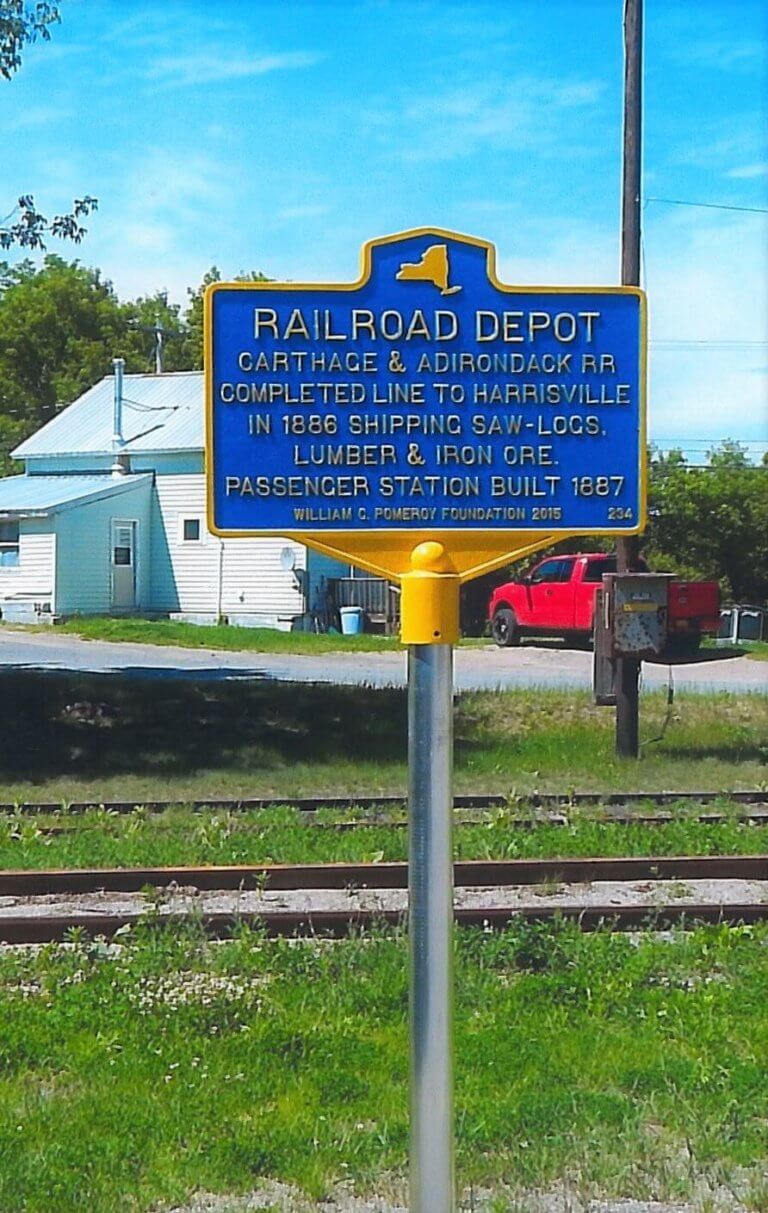