Rest Haven was a vacation home for the blind in the early 20th century. Built in 1902, Moses C. Migel purchased the property in 1923 and donated it to the American Federation for the Blind in 1944. Migel devoted more than 50 years to assisting the blind. The property was purchased in 2016 by HRR Corp. and restored.

Rest Haven, Inc.’s organizational chronology notes that in 1923, M.C. Migel founder and president of the American Foundation for the Blind (AFB) purchased the building with its five acres from the McKendrick estate for $1,000, a year later conveying the property to Rest Haven, Inc. The interior was redesigned and renovated for the purpose of bringing blind women to the area for a period of two weeks. In 1944, Rest Haven Inc. later gave the title of the property back to the American Foundation for the Blind.

On November 1968, the Lantz family purchased the property, never altering it in any way. Later they sold it to the Orange County Chapter of The Arc, a national organization with a congenial mission to enable persons of all ages with disabilities to live as contributing, valued members of the community. In September 13, 2016, HRR Corp, aware of the house’s historical connection to Helen Keller, purchased the property from Arc of Orange County.  They began a campaign to preserve and renovate the property back to its original condition.

Helen Keller was a celebrated deaf and blind woman writer, political activist, and lecturer. As a member trustee for the American Foundation for the Blind, some of Keller’s responsibilities included site administration.  Rest Haven, Inc. notes that internal memos dated 1933 to 1968 illustrate her active involvement in the operation of Rest Haven until her death, on June 1, 1968. A New York Times article in the American Foundation of the Blind’s press clipping series, dated December 5, 1934, recognizes President Roosevelt as an honorary president of the organization, M.C. Migel as the donor of the “land and three-story Georgian building… at the organization’s new home, 15 West Sixteenth Street”, and Helen Keller pictured laying a cornerstone in the press photo. Miss Keller described the warm sense of satisfaction which overcame her as she placed within the cornerstone the record of what had been done for the blind, “a field of activity” which she observed as “ever widening; the surprises so varied and the subject suggest[ing] so many unseen forces at work, one is kept wondering what will happen next.” Also noted are the contents of the copper box placed in the cornerstone: autographed photographs of Miss Keller and Mrs. Anne Sullivan Macy, a talking book record of Mr. Migel’s remarks, reports of the Foundation since its origin in 1923, copies of the publication Outlook for the Blind, and newspapers for the December 4 and 5 ceremony.

In 2019, Rest Haven, Inc. operates the site as an adult care facility while respectfully maintaining its historical integrity. Preservation efforts focused on restoring and interpreting the original adult home residence founded in 1923 as a home for blind women are underway. To this end, in a press release celebrating October 2018 as Blind Awareness Month, the Orange County website honored Rest Haven’s recent addition to the State and National Registers of Historic Places. On March 23, 2017, exactly one year after the organization signed the contract to buy the property, Rest Haven, Inc. was designated an historic site. 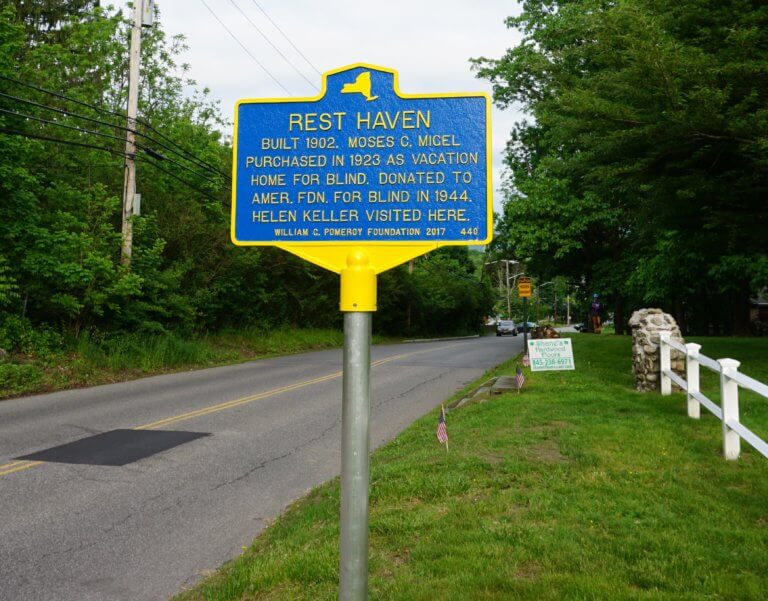 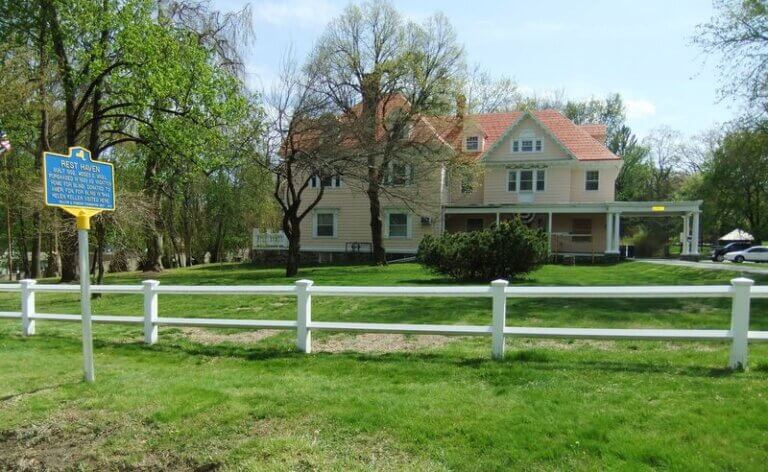