Richard Smith was an early white settler of Long Island and the namesake of Smithtown, New York. He came to New England in the mid-17th century, and later moved to Long Island where he was one of the primary patentees of Smithtown.

According to a version of the story written in 1882 by Judge J. Lawrence Smith, the daughter of Wyandance, a Montauk sachem (chief), was kidnapped by Narragansett rivals. However, she was recaptured by Lyon Gardiner and brought back to Richard Smith’s dwelling, where she was reunited with her father. To demonstrate his thanks, Wyandance granted to Richard Smith all the land he could ride a bull around in one day. In the process of the ride, Smith took his lunch in a hollow, which was known since as the “bread and cheese hollow”. This constituted the legendary origin story of Smithtown. (Street, 1887)

Richard Smith came to Boston from England around 1650 where he married before moving to Long Island several years later. (Thompson, 1839) He was one of the earliest settlers of Southampton in Long Island, and later became a primary patentee of Smithtown. His tombstone shows that he died on March 7, 1692. (Smith, Frederick, 1967) He is considered one of the founders of Smithtown due to his role in settling and selling land from his patent. (History of Smithtown, 1882)

While existing deeds from the era make it doubtful that Smithtown’s approximately 10 square mile borders were determined by the legendary bull ride, it is certainly possible that Richard Smith used a bull for transportation. A writer in 1839 notes that horses may not have been introduced to the area yet, or in any case were rare and expensive, leading Smith to reportedly use his bull for tasks which would normally call for a horse. This may have been the source of his nickname “bull-rider” and for his descendants to be known for many years as the “Bull Smiths”, as distinct from the “Tangier Smiths” and “Rock Smiths” from other parts of Long Island. (Thompson, 1839)

The legend has continued to play a role in the town’s identity. In 1941, a bronze statue of Smith’s bull was unveiled near the intersection of Routes 25 and 25A. The statue and its plaque commemorated the town’s founder, Richard “Bull” Smith, and his legendary mount, “Whisper the Bull”. The statue was designed by an architect, Lawrence Smith Butler, who was descended from Richard Smith. (Preservation Long Island, 2019) 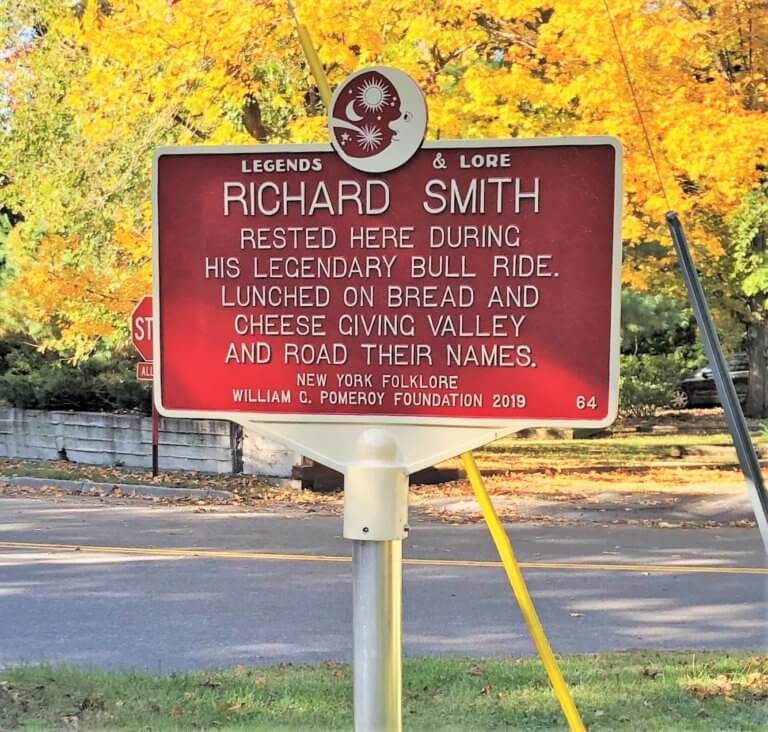 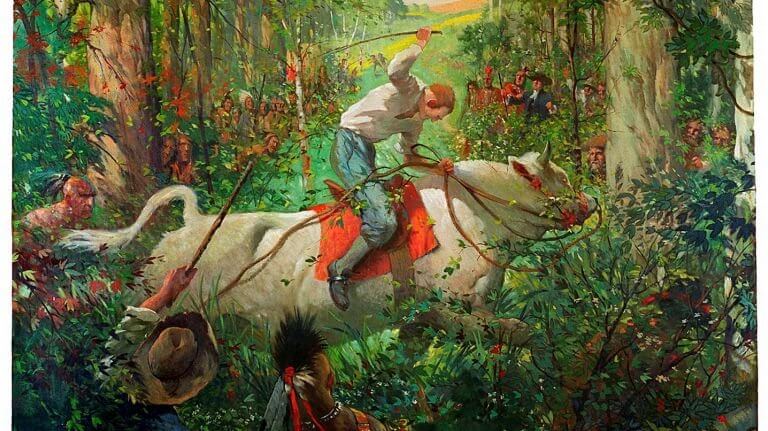 In Robert Gaston's 1939 mural, Richard Smith rides his bull around a giant area to set borders for Smithtown.