Ronek Park was a non-discriminatory housing development located on a 147-acre parcel, started by Thomas Romano in 1950 as part of the local housing boom that occurred after World War II. Homes in Ronek Park were advertised as “modern, California-style, with overhanging flat roofs, front entrance terrace, and exterior walls of asbestos shingle and redwood siding…Each house will contain 851 square feet of living space, including two bedrooms, living room, dining room, storage-utility room and an electric kitchen with washing machine, refrigerator and metal cabinets.” Asking price for the homes was around $7,000, with monthly payments of approximately $44.60.

After the war ended, home ownership seemed like a novelty. As combat engineer veteran, James Merrick, Jr., one of the first homeowners in the subdivision, told Newsday in a February 6, 2012 article, “We all had new homes… We had never owned a home, most of us.”

But homeownership wasn’t the only novelty offered by Ronek Park. Non-discriminatory meant Jews and African Americans, who were often barred from purchasing in suburban neighborhoods, could purchase a home. Indeed, most subdivisions would still have been segregated at this time. Builder Romano’s ethos, as reflected in a real estate ad from the period, according to Outside the Gates of Eden: The Dream of American from Hiroshimo to Now (2014), declared itself “Dedicated to the Preposition That All Man Are created Equal… and no UnAmerican, Undemocratic restrictions as to race, color or creed!” By offering affordable housing to all, Ronek Park supported racial integration. Its spirit of integrationist, and indeed socio-cultural diversity was ahead of its times.

By comparison in Civil Rights on Long Island (2016) author Christopher Verga points out that Levittown, the better-known post-war suburban housing division, with its 17,000 homes, formalized racism in deeds stipulating ownership against “any person other than members of the Caucasian race.” The Village History of North Amityville on the Town of Babylon website corroborates this fact about Levittown, adding that Ronek Park’s non-discriminatory policies attracted many new families to the community in the early 1950s. 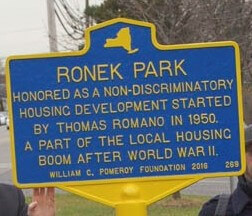