The Roslyn Grist Mill, also known as Robeson-William Grist Mill, is a rare surviving Dutch-framed watermill built between 1715 and 1741. It operated as a working water mill for more than 150 years and as a tea house from 1920 to 1974. Listed on the National Register of Historic Places in 1986, renovations began on the building to restore it for use as an educational center.

In addition to the National Register listing and the William G. Pomeroy Historical Marker, The Library of Congress holds photos and documentation of the Roslyn Grist Mill compiled in 1933 by the Historic American Buildings Survey (HABS), the United States Federal Government’s oldest heritage documentation program. Two historical photos on Preservation Long Island’s website attributed to the Town of North Hempstead Historian document two different eras. One is from ca. 1897 where a mill worker stands in a door frame, and the other is ca. 1925 now with a visible neon tea house sign.

An August 19, 2018 Newsday.com article reported that long-awaited repairs had been set in motion with $440,000 grant funding, the restoration a partnership between the County of Nassau, Village of Roslyn, and Roslyn Landmark Society. In addition, Preservation Long Island added that the Roslyn Landmark Society had raised a total of $1.95 million dollars for restoration efforts from various foundations, government grants, and through individual contributions. In addition, the New York State Regional Economic Development Council (REDC) awarded the project $1 million.

“It’s one of the oldest buildings on Long Island” Roslyn Landmark Historical Society president Howard Kroplick told Newsday.com, “I believe it may have been the first building in the Village of Roslyn.” The Grist Mill, located at the head of Hempstead Harbor, was erected between 1715 and 1741 and remained a working mill for two centuries, playing an important role in the development of the village. “Scores of Dutch immigrants settled along the Hudson Valley and western Long Island in the late 1600s and 1700s, Kroplick explained, “and the mill is a still-standing example of how those settlers built their establishments.” Although a September 9, 1917 Brooklyn Daily Eagle documented the mill’s restoration and use as an historic museum, the historic structures report prepared by John G. Waite Associates (JGWA), Architects at the outset of the preservation project evidenced the building had deteriorated over the years from lack of maintenance, the high water table, and periodic tidal flooding.

In 2019, the Nassau County government website noted that the County acquired the mill in 1976, which is now closed to the public for restoration. Starting in November 2018, Preservation Long Island noted that the multi-phased restoration project was projected to take place over the next four years. Incorporating a history of the building and measured drawings furnished by the Roslyn Preservation Corporation, the historic structure report provided detailed conservation recommendations and priorities, advocating raising the building to mitigate water problems and restore it to the level of the street.  JGWA also completed a feasibility study that prioritizes the restoration plan, and provides construction phasing, logistics, and probable cost information. This updated report will allow further stabilization and conservation work to begin on the mill. 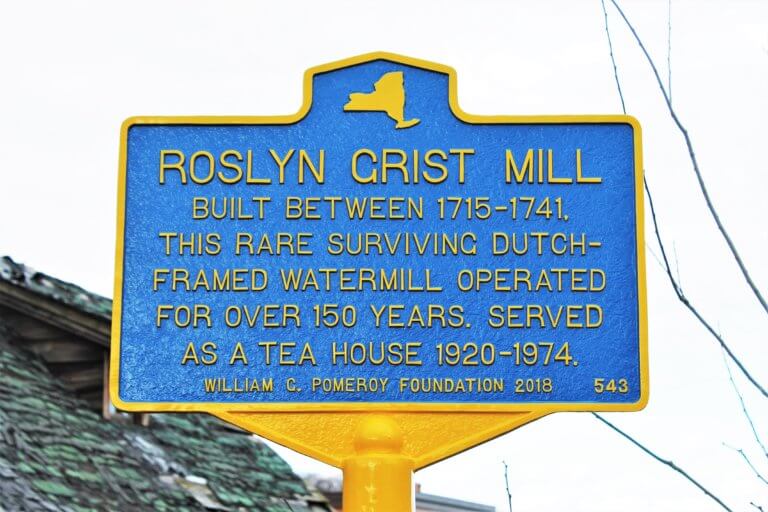