In 1798, Samuel A. Law arrived at the Franklin Patent as the land agent for the proprietors. He oversaw the building of roads and the surveying of land for farms. The Town of Meredith was created on March 14, 1800.

The land the town was founded upon was owned by Reese Meredith, who the Town of Meredith’s website states was a merchant from Philadelphia and a friend of George Washington. Reese was stated as being a one of 30 original patentees of 30,000 acres of land situated in Albany County, of which the Franklin Patent was a part. After he passed away, it is believed that his son and two daughters named the land after him.

Early history of the town and its first residents is not well known, because as Delaware County, New York: A History of the Century, 1797-1897 (1898) states, the building that housed the early town records burned down. The first settlement of the area is credited to Joseph Bramhall in 1787, and it was a few years before the land become more populated, due to the fact that the land was “almost a wilderness.” To help settle the area, Samuel A. Law was sent out as an agent for the Franklin Patent and was made to take surveys of land that could be made available for sale. The “liberal terms” that were eventually offered to settlers were said to have “led to rapid filling up of the vacant lands.” As a settler in the area himself, the History states that Law had a large influence in the establishment of a section of town called Meredith Square, which “for a long time was the most important point along the Catskill turnpike, or in Delaware county.” It was also said that he was the reason behind a large influx of New Englanders moving to the town, causing it to have “assumed much of the characteristics of a Connecticut town.”

A second history of the county, entitled The History of Delaware County, notes that there was a favorite story Law liked to tell of his first summer in Meredith. Before the land had become more populated, Law and two other men had traveled to the center of the patent to survey the land. He had heard there was a cabin nearby and decided to see if they would let him and the two men board there over the summer. The cabin ended up being a one room building that was already holding a husband, wife, and two kids, but the men were still welcomed to stay. Conditions ended up being less than ideal, with the wife stating that “the water was bad and would not cook pork,” leaving the men only venison and bear meat to eat for months. It is said that Law was able to get out one food request to a Judge Frisbee in Delhi, and for one dinner the men were able to have pork and potatoes. Once fall came, Law and his men left to return to their homes, and when they came back the next spring the cabin was empty, with the family “moved beyond the encroachments of civilization.”

That second history of the county states that Law built his mansion in Meredith “about thirty rods” from where that first cabin stood, and an article from the Delaware Gazette on April 30, 1884 said “it was unquestionably the finest resident in the county.” The article also stated the mansion was unfortunately discovered to be burning one Sunday after church, and it was believed that the fire had started in the attic due to a faulty chimney. It was quickly decided that the building could not be saved and all efforts were focused on removing as much from the house as possible. At the time, the mansion belonged to Samuel Law’s son, Jonathan, and it was said that the burning of that “old landmark” was a “serious loss to the village.”

The historic marker stands in front of the former location of Samuel A. Law’s mansion. 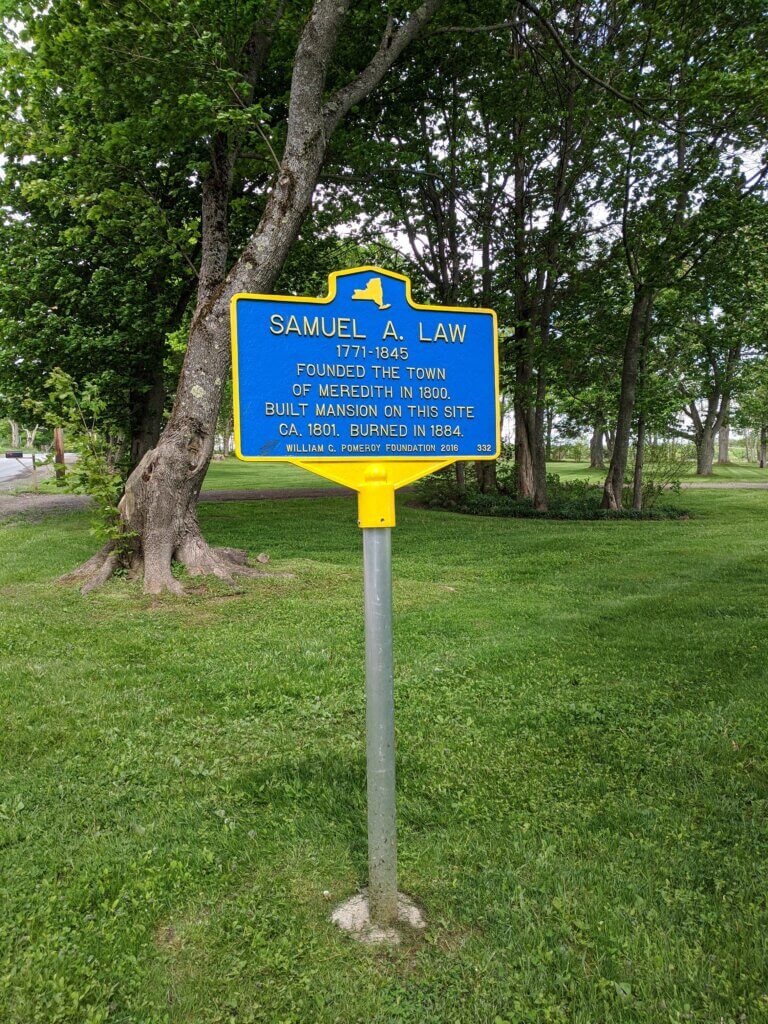