Established in 1904, Schrade Cutlery was a leader in manufacturing safety push button knives. They held patents on their machines and production techniques. In 1958 the company moved to Ellenville, NY. Schrade contributed to a large cutlery industry in the area throughout the 20th century.

In a September 4, 2014 Daily Freeman article, Wawarsing Historical Society and Knife Museum president Richard Craft explained that The Imperial Schrade Company “…was one of the largest pocket-knife makers in the country.” Between 1958 and 2004, the company employed as many as 500 people.

But the manufacture of knifes in Ellenville long predated the company’s arrival. During the 1830s, skilled craftsmen from Sheffield, England, came by way of Connecticut to set up shop, harnessing Ellenville’s abundant waterpower from the many streams in the area. According to Craft “they made everything by hand… It was such a skilled trade that an apprenticeship lasted 20 years.” In an agrarian society, pocket-knives were thought to be a more central part of a man or woman’s day than today. “Almost every man carried one,” he said. “They used them when they were hunting or cutting ropes.” The Industrial Revolution would allow manufacturers like DeVine to accomplish that same quality with mass production. Each employee specialized on a different part allowing them to make hundreds per day. Through the years, knife-making passed on to different companies like Ulster Knife and Napanoch Knife until they were purchased by Schrade.

Since his grandfather had worked for Schrade, Craft also had a personal connection to the company, amassing a collection of hundreds of the company’s knives over the years. His collection helped him realize that knife-making in Wawarsing was a story worth preserving. “Now when [visitors] enter the museum, they won’t [just] find an exhibit telling the history of knife companies, the folks that founded them, or tales from the people who worked at Schrade,” Craft explains. “Instead, they will find a large room full of display cases rang[ing] from Schrade cases that would’ve been found in hardware stores and sporting goods stores across the country, to a 150-year-old display case discovered in a store in Ellenville that has been defunct for 75 years.” Today, the best place to learn more about the company and the knife-making heritage of the Ellenville-Walden region is at the Wawarsing Historical Society and Knife Museum in Napanoch, NY. 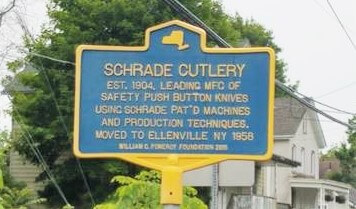