Prior to this cemetery being established, local cemeteries were small private plots or were located in nearby towns. As the hamlet of Schuyler Falls grew and prospered, community leaders came together to establish a larger resting place for the departed. This led to the creation of Schuyler Falls Cemetery.

To create the cemetery, the community leaders gathered on November 21, 1876 in order to organize the association. Though the notes for the meeting were recorded two years after the initial meeting, they still detail important members of the town that were present. One family in particular seemed to be very involved with the formation of the cemetery, with four brothers from the Weaver the family actively participating.

The Weaver family has a history in Schuyler Falls, and it is documented in the History of Clinton and Franklin Counties, New York (1880) by Duane Hamilton Hurd. Their involvement with the community began with their father, Peter Weaver, who was born in Massachusetts and moved to the area in 1808 for work. In 1820, he married his third wife and had nine children, four of whom were mentioned in the cemetery meeting notes: Junius B., Lorin B., William B., and Nathan R. Both William and Nathan (listed as “N.R. Weaver” in the notes) were simply listed as present, but Junius and Lorin were given positions in the committee. Lorin (listed as “L.B. Weaver”) was appointed the title of secretary, while Junius (listed as “J.B. Weaver”) was voted to be one of the six trustees. Lorin also played a large part in procuring the land for the cemetery, with a deed dated April 1, 1877 noting that he had given land for the “strict use as a cemetery” to the trustees of the association. According to findagrave.com, all of the brothers, except for William, are buried at Schuyler Falls along with their father Peter.

Another notable name from the community that appeared in the meeting notes was Chauncey Turner. The History lists his parents as Abel and Mary Turner, who happened to be distant cousins, and state that Abel moved to live with Mary’s father in Plattsburgh, which was eventually sectioned off into Schuyler Falls. Mary’s father, as listed on findagrave.com, was Ezra Turner, and in the History, he is stated as the “first settler within the boundaries of this town.” Through his work with building sawmills and forges, Ezra helped to establish Schuyler Falls, and his grandson, Chauncey, continued his support of the town by acting as the town superintendent for six years and Justice of the Peace for twelve. Along with his other commitments, Chauncey was also listed as one of the men voted to be a trustee for the Schuyler Falls Cemetery Association. Findagrave.com lists Chauncey’s grave in Schuyler Falls Cemetery, along with Mary, Abel, and Ezra. 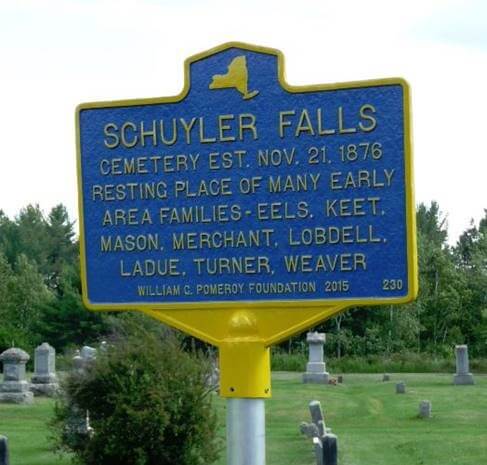 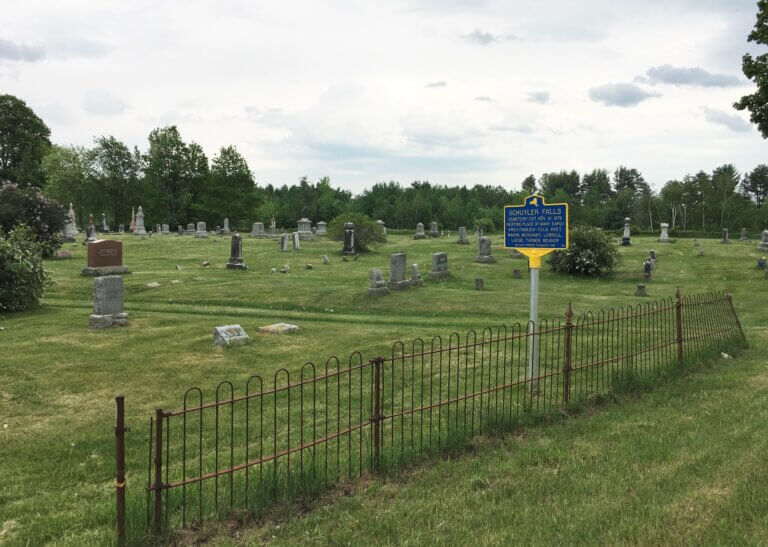