In 1870, a bridge builder from Troy, New York named John D. Hutchison built an iron bowstring truss bridge over Claverack Creek, known as Shaw Bridge. This bridge was based on a design that was patented by Squire Whipple of Utica, in 1841.

Bridges made of iron had been built in Great Britain as early as 1779, but it was not until 1839 that iron was even incorporated into a bridge structure in the United States. In an article for Structure Magazine (Jan., 2015), Dr. Frank Griggs, Jr. stated that it was an engineer by the name of Squire Whipple who finally brought the idea of an iron bridge to the forefront in America. Before Whipple, most bridges were made of wood and regularly had to be replaced as they deteriorated. This came to Whipple’s attention when the Erie Canal announced its plan to expand the canal from 40 feet in width to 70 feet. Longer span bridges would be required to cross the canal, and Whipple felt his design would be superior to what was being used at the time.

Whipple came up with the idea of a bowstring iron truss, which uses an iron truss in conjunction with a wooden floor. The truss would be independent of support from the floor, and would allow the wood to be replaced as needed without affecting the structural integrity of the bridge. Whipple’s design was submitted to the Patent Office and accepted as Patent No. 2,064. It stated that he had claim to the use of both cast iron and wrought iron in diagonal braces on the arch, thrust ties, and a diverging top cord to provide the arch with lateral stability. This design was said to have been contrived “without precedent or example” and it “evolved the scientific basis of bridge building in America.” Once able to convince the Canal Commissioners to adopt his design, hundreds of bridges were built across the canal, with many others taking the design and using them to cross rivers and streams.

Shaw Bridge was built using the design patented by Whipple, and it was meant to connect Van Wyck Road over Claverack Creek. The name Shaw is attributed to a farmer who owned land adjacent to the bridge, and in an article published by HudsonValley360 in July of 2018, the road was used by him and other farmers in the area to cross the creek. As one of eight Whipple Bowstring Truss Bridges still standing as of 2018, it was placed on the National Register of Historic Places in 1980, and it stayed in use until 1988. Shaw Bridge is stated as being the only Whipple bridge still in its original location, due to the fact that others had either been taken down or moved after the canals were abandoned or filled.

The article from 2018 also discussed a plan for Shaw Bridge to be transferred from Columbia County to the town of Claverack so that it can be restored. Said to have been in need of a new deck, sandblasting, and a painting, the town would only be allowed to go forward with the renovations if they were given ownership by the county. The goal would be for the bridge to be open for pedestrian traffic, and the New York State Regional Economic Development Councils’ website reported that it was to be part of a walking and biking loop that would “course through the historic hamlet and the countryside.” 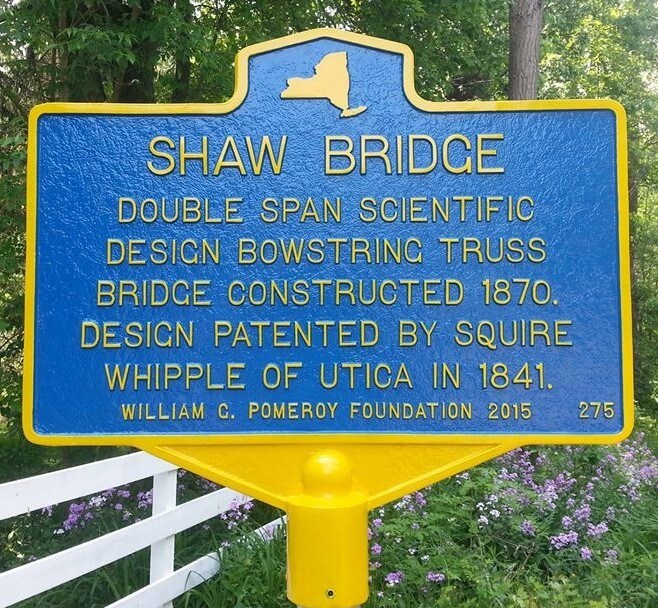 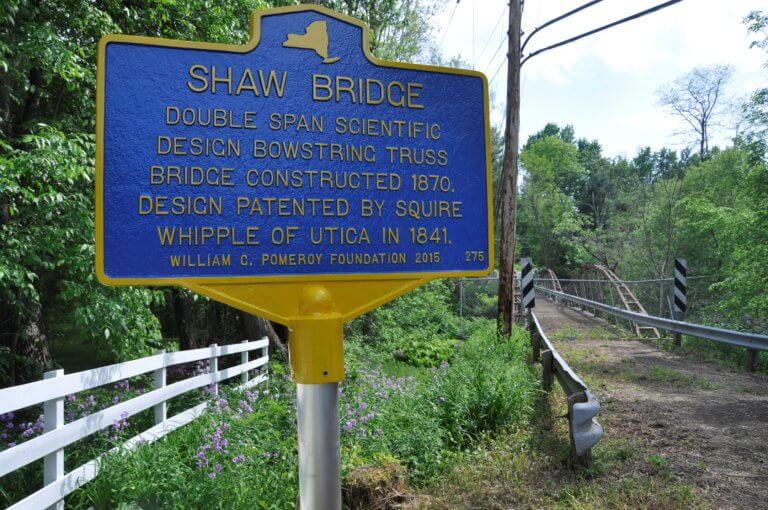