The Research Foundation for SUNY

Sheldon Hall is a prominent building located in the center of the State University of New York (SUNY) Oswego campus. It first opened in 1913 and served as an academic building until the 1930s. It was renamed and dedicated to the school’s founder, Edward Austin Sheldon, in 1961.

Edward Austin Sheldon was born on October 4, 1823 in Perry Center, NY (Findagrave.com, 2019).  He relocated farther north to Oswego, NY in 1847 to help run a botanic nursery, however this venture proved unsuccessful (SUNY Oswego Website, 2019). Despite the minor setback, Sheldon remained in Oswego. He noticed that many children in the region were destitute and illiterate, which led him to create the Orphan and Free School Association. This association offered the poor a free education (SUNY Oswego Website).

Rote memorization was a popular teaching method during the early 19th century. Students were provided with a “reader” or “a textbook containing short passages and occasionally a few woodcut engravings to illustrate the concepts children were to learn” (The Oswegonian, 30 Sep 2011). Many education reformers from the early 1800s, including Sheldon, were searching for better ways to educate youth. In 1848 Sheldon opened his first school and served as its schoolmaster. He utilized a method of teaching heavily influenced by Swiss education reformer Johann Pestalozzi. Rather than memorization, Sheldon encouraged hands-on, interactive learning (The Oswegonian). Two years later he opened a private school in the former United States Hotel (Popular Educator, 1897). He soon applied to be Superintendent of Public Schools in Syracuse where he “consolidated, graded and organized the lower schools, brought together neglected collections of book into a central library and published the first annual report of the city” (SUNY Oswego Website).

In 1861, Sheldon founded the Oswego Normal School, also called the Oswego Primary Teachers’ Training School (SUNY Oswego Website). In 1865 the Oswego Board of Education bought the old United States Hotel property in Oswego to serve as the location for the school (Popular Educator, 1897). Over the next few decades, the building underwent a series of renovations and later became known as the State Normal and Training School (SUNY Oswego Website). Not long after, Sheldon passed away on August 26, 1897 (Findagrave.com as of 2019).

According to a SUNY Oswego Alumni Bulletin (1961), in 1906, New York State allotted money for the purchase of a new site for another school. Seven years and $340,000 later, the new school building opened in 1913 with a capacity to house the full school population (History of the First Half Century of the Oswego State Normal and Training School, 1913). At the 1914 Commencement ceremony, the building was dedicated and became known fondly as “Old Main” (1914 Commencement and Dedication, SUNY Oswego Archives, 1 Jul 1914).

The year 1961 marked the college’s Centennial Celebration. Several buildings on campus were renamed in honor of the event, including Old Main, which was then serving as the Administration Building. It was renamed Sheldon Hall to commemorate the college’s founder, Edward Austin Sheldon (SUNY College at Oswego: Its Second Century Unfolds, Dorothy Rogers, 1988). The building was added to the National Register of Historic Places in 1981 (SUNY College at Oswego).

As of 2020, Sheldon Hall continued to serve SUNY Oswego as an administrative building, housing offices including Admissions, the Office of Development and Residence Life. 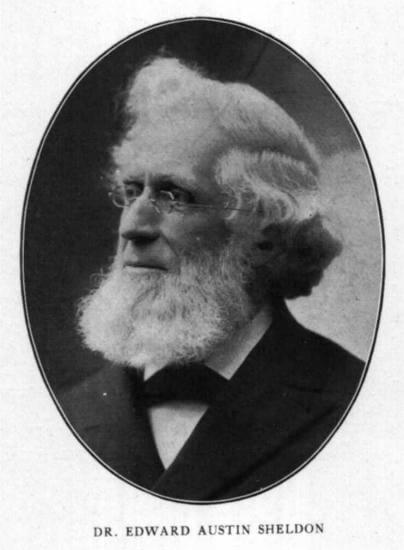 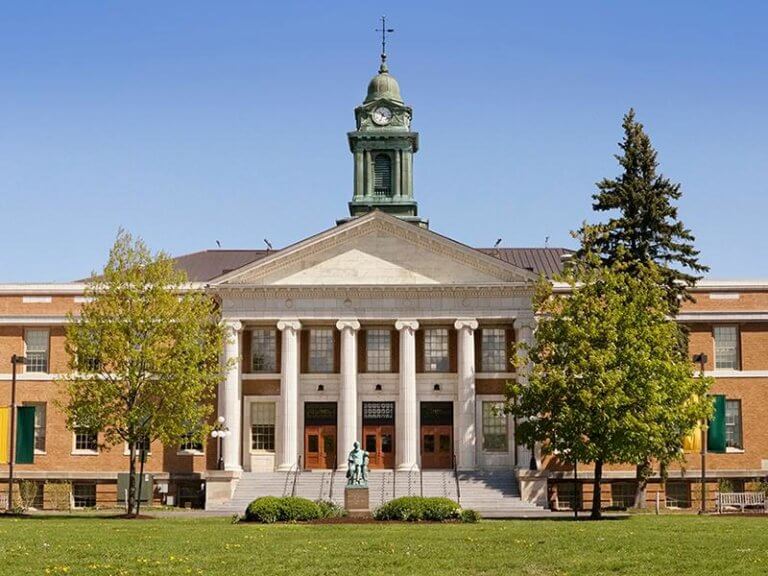