Famous American folk artist and portrait painter Sheldon Peck lived at this site in village of Jordan from 1828 to 1836. Aside from his work as an artist, Sheldon Peck was also ardent abolitionist. Peck and his family were involved with the Underground Railroad, and provided shelter for people of color who escaped slavery to find freedom.

Sheldon Peck was born in Cornwall, Vermont on August 26, 1797 (Vermont Vital Records, National Archives). While in Vermont, he met Harriet Corey who he married around 1824. According to the Lombard Historical Society, Peck began to paint in his early twenties. A self-taught artist, the majority of his known work is considered folk art and consisted of portraits. In 1828, he moved with his family to Jordan, NY (Deed, 24 Sept 1828). The Pecks spent close to 10 years as New York State residents before another move to Lombard, Illinois in 1836 (Deed, 3 Aug 1836).

While in Lombard, Peck became involved in the abolitionist movement and the Underground Railroad. Peck’s youngest son Frank kept a diary in which he recalls seven escaped slaves living with his family. Frank also described that his father as a frequent traveler with business often calling him out of town. It is believed by some that Peck may have assisted In addition to his abolitionist views, Peck also believed in temperance, women’s rights, pacifism and free education. He passed away on March 19, 1868 at the age of 70 (Findagrave.com, 2019).

After his death, Peck’s artwork was rediscovered and sold worldwide. He never signed his artwork, which makes identifying his work extremely difficult. However, many of his paintings have been “identified by a characteristic 3-stroke brushstroke”, according to Lynn Fall, local historian in Jordan. The Lombard Historical Society notes that Peck’s artwork has the ability to “humanize his subjects in a way that few of his contemporaries could with an attention to detail and an uncanny resemblance to the sitters. The viewer feels the spirit of the sitters as their eyes follow you around the room.” Peck’s portraits continue to be discovered. A January 18, 2003 article in The Citizen, records that Peck’s A Double Portrait of Frances Almira Millener and Fanny Root Millener exceeded Christie’s Auction House pre-sale estimates of $200-400k when the piece sold for $647,000!

Peck’s former home in Lombard, IL was added to the National Park Service’s Network of Freedom as a confirmed spot on the Underground Railroad in 2011.  As of 2020, the Lombard Historical Society operated the Sheldon Peck Homestead Museum from the house. The site of Peck’s home in Jordan, NY was forgotten to history for many years until local resident Lynn Fall discovered the location through extensive property research in 2016. 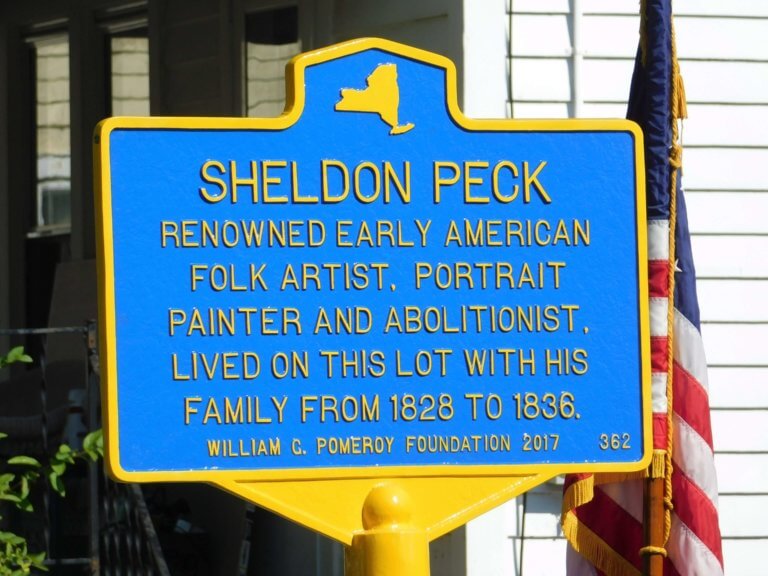