A fishing fly (or lure) known as the “Shushan Postmaster” was named for Al Prindle who served as postmaster of the hamlet of Shushan, NY during 1935-1947. He was a trout fishing buddy and good friend of Lew Oatman, a pioneer of 17 new streamer fly patterns that imitated young baitfish. These streamer designs were considered “exact imitation” style as they were nearly identical to native forage fish commonly found in the nearby Battenkill River.

In 1953 Oatman honored his friendship with Prindle by producing the new fly pattern, “Shushan Postmaster”.  The body of the fly is wound with light yellow floss and slightly tapered, with flat gold tinsel ribbing. The throat of the hook has a few fibers from a duck wing quill, dyed red. Extending the length of the fly is a small bunch of orange and brown fox squirrel tail hair, with a very small section of a brown mottled turkey feather near the end of the hook.

Prindle was also immortalized by Norman Rockwell (1894-1978), painter/illustrator for Saturday Evening Post for more than 40 years. Rockwell lived upriver in Arlington, Vermont from 1939 to 1953 and hired area residents to serve as his models. Prindle was depicted in Rockwell’s “Four Seasons” with fellow Shushan resident Alva Roberson and alone in the painting “Catching the Big One”, with the latter featured on the cover of The Saturday Evening Post on August 3, 1929. 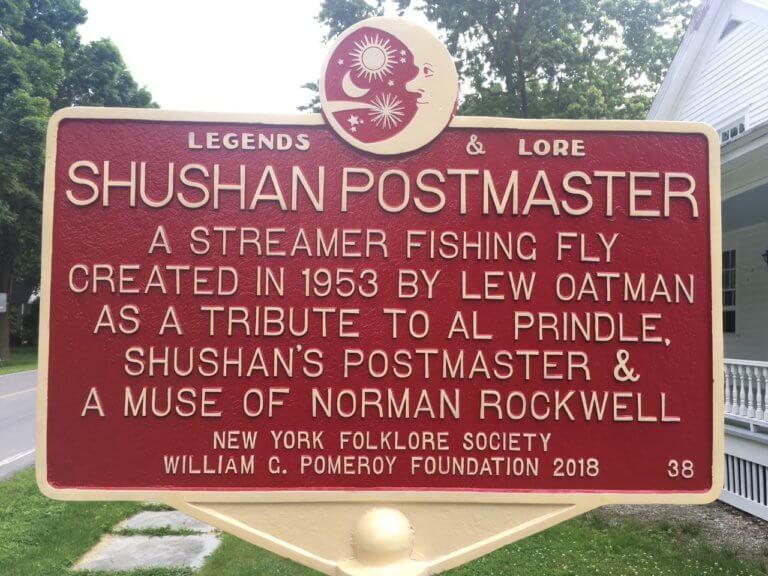