The Zion Pilgrim Methodist Episcopal Church served the Baxertown community from 1848-the 1930s. Unfortunately, the church was destroyed by a fire. Archaeological evidence suggests that this church was a station on the Underground Railroad.

The Zion Pilgrim Methodist Episcopal Church Site was listed on the National Register of Historic Places on October 8, 2014. According to the National Park Service (NPS), the site is an archaeologically significant historic resource in the Baxtertown hamlet of the Town of Fishkill, Dutchess County, New York. The 1848 church served as the central religious and social institution for residents of the Baxtertown hamlet during the second half of the nineteenth century and in the first decades of the twentieth century, falling into disuse and eventually collapsing. The New York History Project added that the church burned and roof collapsed in 1930.

The NPS continues that Baxtertown has long been recognized by historians as an early rural African-American community in the Hudson Valley, and one which appears to share important associations with the history of the Underground Railroad in New York State. The importance of this archaeological site based on recent excavations alone is already considerable; its value rises further in light of present-day conditions. For example, the historic hamlet depicted on nineteenth century maps has been transformed, in more recent times, by development and alteration if not complete loss of the hamlet’s earlier building stock. Since the material culture of the Baxtertown hamlet is no longer extant, the archaeological record retrieved from the church site is all the more critical in creating an accurate historic profile of the church and the small African-American community it served.

According to Ron Green, who now privately owns the site, “Baxtertown, two miles east of the Hudson River in Fishkill, is now only the name of a rural route with a sprinkling of modern residential houses and a few old farmhouses, but it once had a vibrant community life.” He noted, “Scores of families lived in Baxtertown during the late part of the 19th century and into the 20th”.

On December 7, 2013, according to New York History Blog, Hartgen Archeological Associates, led by archeologists Matt Kirk and William Bouchard, and a team of volunteers conducted a dig to look for evidence from before, during, and after the 82 years that Zion Pilgrim served the community. Ubiquitous nails, clay pipe stems, pieces of glass and shards of salt glazed stoneware, transferware and creamware were evidenced—as well as “a brass looking decorative handle from a piece of furniture”, even a thimble. In addition, what appeared to be the remains of a stone and brick wall emerged about ten inches down.

Kirk said that he was “very pleasantly surprised at the diversity and [chronological] range of the material culture recovered from the site.” Information specific to the church building was recovered, in the form of construction and finish materials and hardware, and the location of the church site confirmed; additionally, a wealth of other artifacts, many of which speak to domestic functions, offer information pertaining to the social, cultural, economic and religious life of the Baxtertown community. “While it unlikely that future investigations would reveal any heard evidence of the Underground Railroad,” Kirk said. “With or without an Underground Railroad connection, the Baxtertown church is of historic importance as a place where an enduring small rural population of free African Americans worshiped for generations,” the article resolved.

New York History Blog also provided some further useful religious history on the “Freedom Churches”. The founding of Zion A. M. E. church was established by African Americans in New York City in 1796 in response to what they saw as poor treatment by their white Methodist brethren. The denomination grew quickly in the North, and after the Civil War, also in the Southern states. Officially called the African Methodist Episcopal Zion Church—not to be confused with the African Methodist Church which was founded in Philadelphia—membership grew from almost 500,000 in 1925 to 1,400,000 members worldwide in 2008.

In 2013, New York History Project noted that all that remained visible of the site was a grove of trees on the property of Ron Greene. 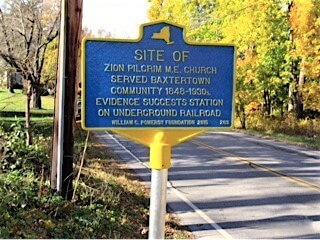 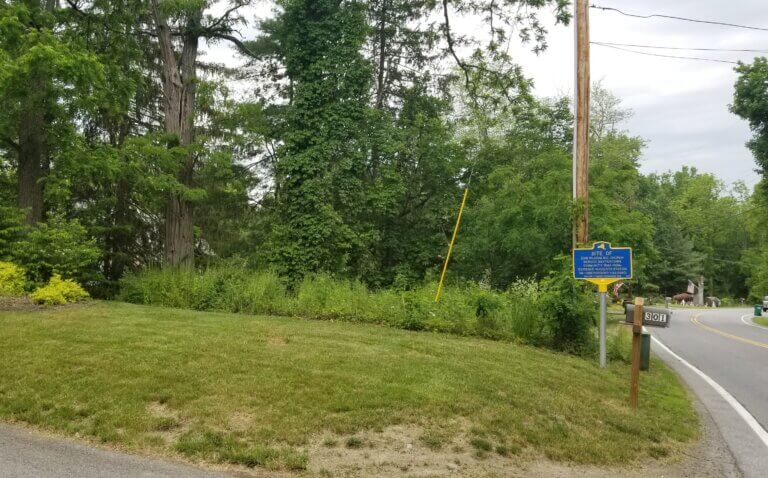