Jabez Bradley (1765-1817) was a commissioner and philanthropist in the former Town of Milton, known today as the Town Genoa. The site of his home is located within the modern day hamlet of King Ferry.

According to the 1879 book, History of Cayuga County, New York by Elliot Storke, Bradley moved from Lee, Massachusetts to Milton circa 1792. In 1794, Bradley purchased 200 acres on the south side of Milton (modern-day Genoa) at the cost of $1.25 per acre. Soon after he built a log home on the property and welcomed his family from Massachusetts to live with him in Milton. County records referenced in History of Cayuga County, New York indicate that Bradley invested quite a bit in Milton. He owned approximately 3,000 acres, both in town and throughout the surrounding area.

Shortly after moving to Milton, town and county records reveal that Bradley joined the local government and served until shortly before his death in 1817. He held various elected positions such as a Commissioner of Highways, Overseer of Highways, Fence Viewer and Pound Keeper.

In 1804, the Union Society, later known as the First Presbyterian Church of Genoa, was organized and elected a board of trustees. Bradley served as one of its board members.The Society decided to build a new meeting house and Bradley generously donated four acres of land to the church (History of Cayuga County, New York). Between 1806 and 1808, Bradley also provided building materials and paid many workers’ salaries to construct the new meeting house. His account books further demonstrate his philanthropic contributions to his community as he funded shingles and siding for the town’s new schoolhouse, plus room and board for the construction team.

On February 20, 1817, Bradley passed away. He bequeathed the house, property and possessions to his wife, Esther and their eight children. 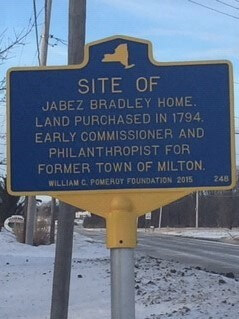 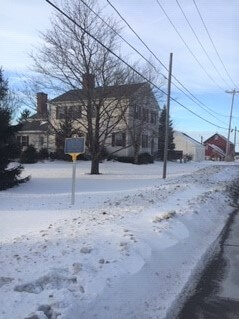