Freeport was a resort at the turn of the 20th century and the golf course was one of its amenities. William G. Miller was a developer and president of Freeport. The course was described as one of the “few links in the country possessed of natural beauty.” Interestingly for the time period, the course had both women and men as members.

According to Freeport History Encyclopedia, Freeport Golf Club, established on June 22, 1900, was located south of Merrick Road and west of Bayview Avenue. The club was organized during a meeting at the Crystal Lake Hotel in which William A. Hope of Brooklyn presided and Ernest S. Wallace recorded, and a constitution and bylaws were adopted. Originally, there were 72 members and membership was limited to 150 members.  W. T. Miller, Charles L. Wallace, and Daniel B. Raynor were among the club’s governors.  In 1900, John C. Kelley was elected president of the Freeport Golf Club and Herbert F. Gunnison served as vice president.

Johnnie Dunn, the former caretaker of the Montclair, New Jersey Club, was contracted to design the 2,494-yard, nine-hole course bordered by cedar trees. The July 1, 1901 edition of the Brooklyn Daily Eagle reported “five bunkers ha[d] been built, the underbrush cleared and the numbers of the holes changed. No. 1, the starting point, becoming No. 7 and vice versa. By this alternation better scores were possible, and it [was] doubtful if the natural conditions to good work [were] excelled by any course on Long Island.” The course was first played on July 4, 1900, the article added that “[s]everal match games ha[d] already been arranged for the Fourth of July, which [were] expected to attract many spectators.”

The improvement of the course was also attributed to the “hearty cooperation and thorough instrumentality” of John Turnbull, the golf club’s caretaker and professional instructor. In 1901 ground was broken for a clubhouse designed by architect Woodruff Leeming and constructed by the firm of Randall and Miller. The clubhouse, according to the History Encyclopedia, featured a veranda, an assembly hall with cathedral-style windows, and a fireplace.  Locker rooms were available for both men and women. Tournaments were held throughout the season. Guests of members were charged 50 cents per day or $5 per month to play the links.

After having been developed and subdivided into building lots for several years, the July 12, 1912 edition of Nassau County Review reported that the Freeport Land Company was being sold by Sigmund at public auction. 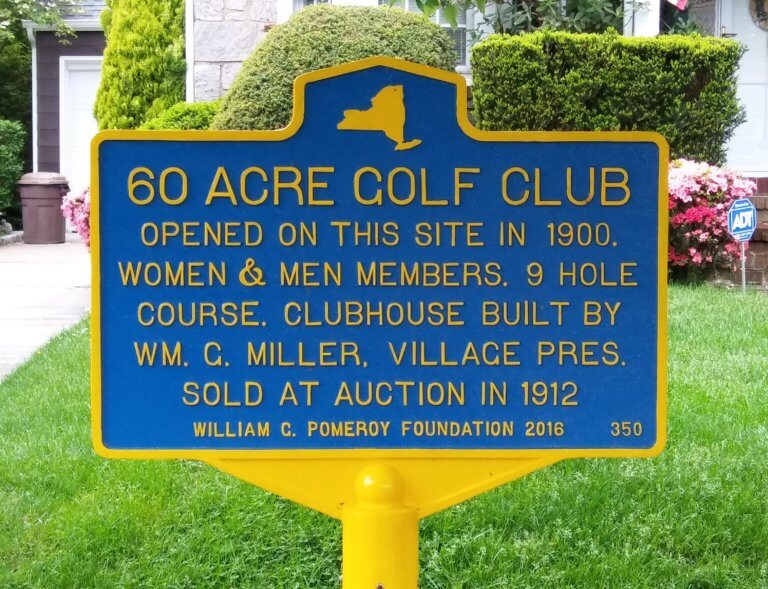