The South Side Railroad (SSRR) line was built in 1867. By 1876 the Long Island Railroad (LIRR) assumed control of the line. The first depot was built in in 1901 in Copiague, New York. In the 1920s there was an attempt to change the name of the community from Copiague to Marconiville. Local residents of Italian descent signed a petition and sent it to the Postmaster General. Ultimately their petition was unsuccessful and the hamlet is still known as Copiague.

Since the depot was built after the line was absorbed by LIRR, the location of the station has been a source of confusion. Copiaque is thought to be one the few railroad stations along LIRR’s Babylon Line that was not originally built by the SSRR. The SSRR and Flushing, North Shore and Central Railroad (FNS & CRR) once had another station in the Town of Babylon to the east called Belmont Junction, which was in service ca. 1873 and 1888. A 1873 hand-drawn map by a John Tooker notes two depots spaced ¾ mile apart, one along the SSRR line, within a mile east of Belmont Junction, the other along the FNS & CRR line.

In Homes of the South Side Railroad of Long Island (1873), a publication of the SSRR Company, the approach to the depot in Babylon is noted as “especially picturesque and attractive. On the right one beholds a wide space of fresh water, fed by a plentiful stream from the interior, and stretching away towards the seas, discernible beyond it.” Although the station and town names changed over time, another detail noted by this source which helps us further identify this depot as Copiague, is a reference to August Belmont: “Upon the left or north side of the railroad, and a comparatively short distance from it, stands the charming villa of August Belmont.” Similarly, in Long Island and Where to Go (1877), a publication of the LIRR Company, Belmont Junction is described as a telegraph office thirty-six miles from Long Island City. It also places Belmont’s stud farm within two miles of the station depot.

Sometime later, Vincent F. Seyfriend’s The Long Island Railroad, Part Two (1963) describes the station as a wooden frame structure, 38 x 60 “thrown entirely over the tracks, with convenient waiting rooms, ticket, and telegraph offices and a baggage room on the north side.” It was located on the west side of Fire Island Ave., its east face overlooking the Watson House, a large summer boarding house that opened in May 1872. Although both depots appear on the John Tooker map, since only the Watson House is identifiable on an 1873 Beers Atlas for the Town of Babylon, in the end we can conclude that the depot had not yet been built. Finally, LIRR Station History files note that the old depot was razed in 1967. The elevated structure, which is still active as of 2019, dates from 1973. 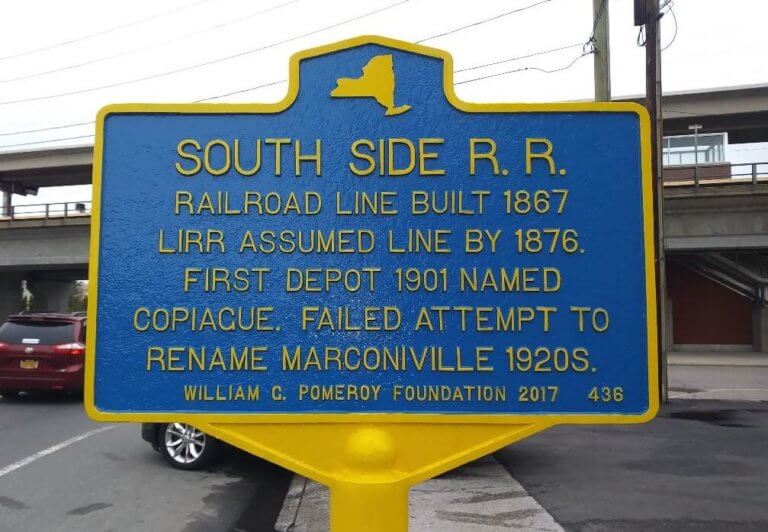