Church of St. Mary of Champlain

In 1905, the Daughters of the Charity of the Sacred Heart of Jesus sailed from France to accept the invitation of St. Mary’s pastor to open the parochial school in 1906. The Catholic school officially closed in the summer of 2012, although the building was still used for various events until a fire in January 2015 damaged it beyond repair.

According to a timeline provided by St. Mary’s about the school’s history, the sisters that came over from France to teach were part of the Daughters of the Charity of the Sacred Heart of Jesus (FCSCJ). The order was said to have been founded in LaSalle de Vihiers in France, in 1823, by Reverend Jean Maurice Cartoux and Rose Giet. Sisters from the order came to Champlain to be teachers at the request of Reverend Francois Xavier Chagnon, who was the Reverend for St. Mary’s Parish.

The timeline goes on to state that only two sisters arrived at first, and they were later joined by four more that came directly from France. One of those first two sisters was Sr. Aline de St. Laurent, and from the correspondence she had with order members back in LaSalle, it becomes clear why the two groups arrived at separate times. In a letter dated August 28, 1906, Sr. Aline writes from the convent she was staying at in Newport, Vermont that the four sisters meant to be starting classes September 3 had yet to arrive from France. She continued on that she was worried about upsetting Rev. Chagnon because he had “already been deceived on another matter,” so she wrote that she and another sister would go to Champlain in order for classes to begin on time. The timeline then states that the other four sisters did not arrive in Champlain till October of 1906.

The first year was said to be hard for the school, and the timeline states that the school building was in such bad shape a state inspector wrote that it was “the worst school in the county.” Slowly, St. Mary’s Academy began to expand, and they were able to add a new eight room building in the back of the convent to serve as the new school. An article from the Plattsburgh Daily Press on March 7, 1908 also states that the school was able to raise sixty-one dollars for a new convent for the sisters. By 1929, the school was able to expand the curriculum through high school, and 1941 saw the addition of a new building to house a new gym, four classrooms, library, cafeteria, and kitchen. Things began to change in 1969, when the lack of teaching sisters and funds forced St. Mary’s Academy to close their Junior and Senior High Schools and become a K-6 elementary school.

St. Mary’s Academy celebrated one hundred years of education in 2006, and Sr. Monique Gagne, the Provincial Supervisor in the FCSCJ order, wrote a letter to commemorate how “one hundred years later the Daughters of the Charity of the Sacred Heart of Jesus…continue their presence and ministry in Champlain.” In 2012, however, St. Mary’s Academy closed its doors, and according to an article published August 15, 2012 by North Country Public Radio, it was due to “declining enrollment, a budget deficit, and worries about long-term debt.” The school building has since burned down, and it was announced that a new parish center was to be built in its place. An article from Press Republican on May 5, 2019 documented the groundbreaking for the new center, noting that the fire “was the ending for a new beginning.”

As of 2019, the marker stands at the former site of the school, which has since been torn down due to damage from the fire. 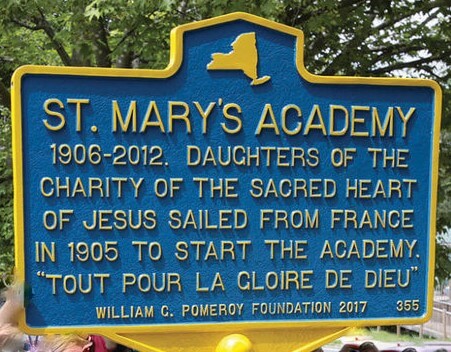