The Stanton Hill Cemetery was established by Quakers during the 1820s. The earliest burials, located at the southern perimeter of the cemetery, are those of Quakers who lived in the area. The cemetery was incorporated and opened to all for burials in 1907. This site was placed on the National Register of Historic Places in 2016.

Dear Old Greene County, published in 1915, claims that Quakers built a church on Stanton Hill as early as 1803, and families by the names of Bedell and Halsted were among its chief supporters. The grave of Adam Bedell is among the earliest in the cemetery, with the inscription indicating he died in 1826. (Headstone, Stanton Hill Cemetery) J.B. Beers, writing in History of Greene County, 1884, claims that an Orthodox Quaker church was erected on Stanton Hill in 1833 and its prominent members included Solomon Carman, Jesse Powell and Lewis Bedell, among a number of others sharing those two family names. The nearby Hicksite Quaker church was apparently built in 1840 and also included many Powells and Bedells among its notable members as well. (J.B. Beers, 1884) It is likely that this cemetery was established to serve these churches in its early history.

A property indenture from 1828 records an exchange of land on Stanton Hill from two land owners, Jacob Gurney and Solomon Carman, to Peter Bedell and Burling Hoag for the purpose of establishing a cemetery “…and for no other purpose.” (County Record, 1828) Of these four individuals, Solomon Carman, Jacob Gurney, and Peter Bedell would later be buried in this same cemetery and their headstones can be found there as of 2019. (Headstones, Stanton Hill Cemetery)

Almost a century later, in 1907, the cemetery passed into the ownership of a newly formed Stanton Hill Cemetery Association. An indenture from 1929 recorded a sale of portions of the cemetery owned by the Powell family to the association, but set aside four lots for use of the Powell family. (Indenture, 1929)

The graveyard displays the evolution of headstone art and customs over the 19th and 20th centuries. The registration application to put the cemetery on the National Register of Historic Places in 2016 discusses the variety of grave marker styles and their change over the years. The early Quaker graves were modest, plain tablets in straight rows, made from local bluestone. Later styles include single and triple lobed markers, round-headed markers, segmental-arched and peaked markers, and even some obelisks, among other styles. (NPS Registration Form, 2016) This succession of different styles also reflects the gradual shift of the cemetery from its Quaker origins to being a secular graveyard for local people generally. 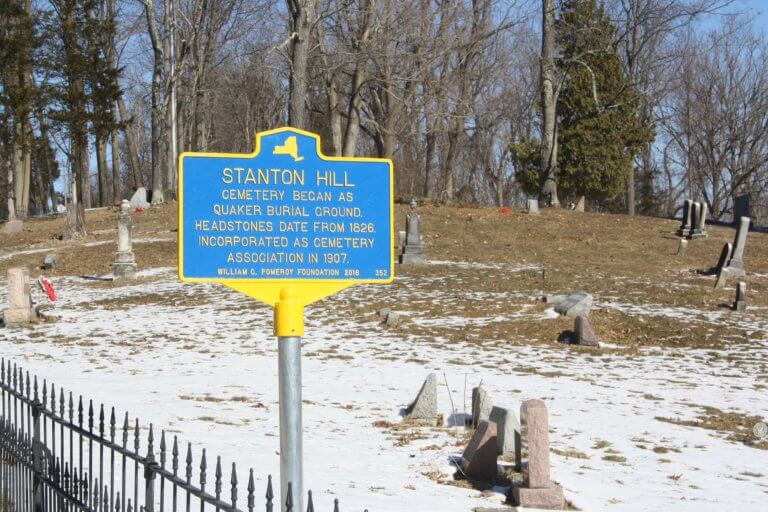