James Reed, of Wassaic, New York, owned and operated a steelworks around 1775. It was used in the production of muskets to aid the American cause and to supply the Continental Army during the American War of Independence. The January 27, 1894 edition of Amenia Times added that “it was here that Cornelius Atherton made swords for the officers of the Revolutionary army. It is not a wild conjecture that Ethan Allen’s sword was made here.”

According to Philip H. Smith’s General History of Dutchess County: From 1609 to 1876 (1877) Richard Sackett, an early settler to the Town of Amenia, arrived about 1711. Several years before any other settlement, he located at place known as the “Steel Works,” one mile south of the hamlet of Wassaic, NY. “Steel Works” referred to a furnace and foundry that were established to manufacture steel for the Continental Army during the American Revolution. Interestingly, at the time of Smith’s publication he noted that “the site of the works [was] still covered by coal dust and cinders.”

Eighteenth Century Documents Of the Nine Partners Patent Dutchess County, NY (1979) a publication of the Dutchess County Historical Society, records the April 15, 1778 deed conveyance to James Reed of Amenia from Major Luther Stoddard of Salisbury. The property was described as “Amenia Lott 29 1/6 of Forge or Steel manufactory on river or stream that runs through Lott 29 on road to Dover. 1/6 of coal house, daming [sic] and ponding, privilege of water to my meadow when it can be spared.”

Phase IA/IB Archaeological Survey Silo Ridge Project Parcels 1,2, and 3 and Phase II Archaeological Evaluation West Lake Amenia Road Historic Site (2014) a cultural resources survey undertaken by the Town of Amenia in conjunction with New York State Office of Parks Recreation and Historic Preservation (NYSOPRHP) and Historical Perspectives, Inc. confirm that development of the Nine Partners’ Patent, an historic land grant, was quite slow throughout the 18th century. There is no direct evidence that the project site was inhabited during this time. In fact, a 1797 map indicates that the only settlement near the project area was a house and grist mill to the north on what is now West Lake Amenia Road. At that time, what is now Route 22 did not exist; the main north-south road in the area that became Route 22, now Old Route 22, was situated farther east of the project site.

The background history provided by the survey explains that iron ore was identified in the region by the mid-18th century. Spurred by the aversion to British goods and the pending American Revolution, Captain James Reed and Benjamin Ellis began manufacturing steel locally, using iron obtained from Livingston’s Furnace at Ancram, now the hamlet of Wassaic, within a mile southeast of the project site. As early as 1770, Samuel Dunham had established a furnace in Amenia, west of the hamlet of Leedsville and northeast of the project site. Ore from the Amenia Mines, located about a mile north of the project site, supplied both of these furnaces. Although the survey noted that by 1797 the Steelworks had ceased operation, and was in ruins, James Reed still appeared on the 1799 New York State Tax Assessment as a mill owner.

Another interesting detail about the Steelworks is that John Reed may have learned steelmaking from Cornelius Atherton. A July 18, 1903 article from the Scientific American announced the discovery of a 1772 contract made by Cornelius Atherton, “pioneer steel maker of the United States” to “learn and instruct James and Ezra Reed in the art of making steel” and the Vol. 9, 1903 issue of Machinery went so far as to attribute the construction the old Steelworks to the contract. Moreover, American Archives documents the Memorial of Cornelius Atherton, praying to be exempted from military duty that he may be enable to fulfill his contract for making muskets, dated September 25, 1776.

In 2019, Google Maps indicated there was a nearby street named “Steelworks Circle.” 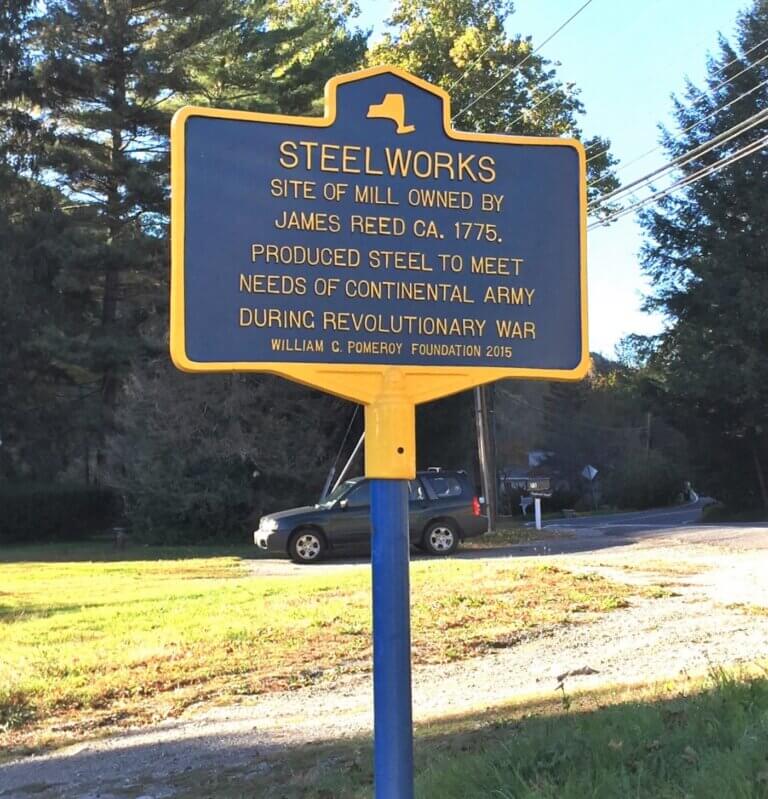 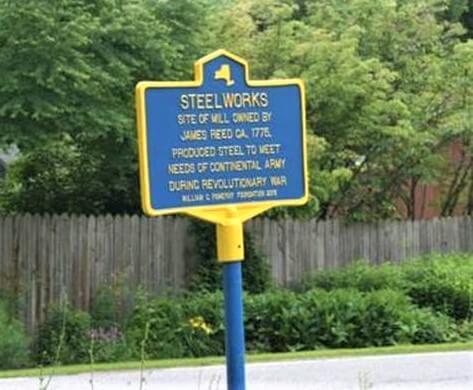