Reverend Ira Hart, originally from Connecticut, organized a Congregational Society in 1803, just north of Lowville, NY in Stow’s Square. Church services were held for the community. In 1807, soon-to-be U.S. Representative for the district, Silas Stowe, deeded a site in Lowville for the construction of a building that would act as meeting house and school (First Presbyterian Church of Lowville website, 2017). In September of that year, the wooden structure was finished and the First Congregational Society of Lowville was formed. Both Stow Square and Lowville members shared the space even though they were a part of two different churches.

In 1818, the Stow Square members decided to join the Presbytery of St. Lawrence which led to the breakdown of the Presbyterian Society of Lowville (First Presbyterian Church of Lowville). The Lowville natives moved forward and in 1822, adopted a confession of faith and covenant and formed the Second Presbyterian Church of Lowville. With growing numbers, the current space they used to meet was reaching its max. So in the 1820s, they made plans to build a new the gathering place however in December of 1827, the new building burned down. Still in need of a larger space they built another church for $3,500  (Lowville Gazette, 6 Jan 1830). But a short time later in January of 1830 their church burned to the ground. The local Lowville Gazette, reported that the church was impossible to save however some articles inside the church were rescued. They stated that the fire was caused by “the heat of the stove pipe, where it passed through the ceiling” (Lowville Gazette, 25 Mar 1830).

Determined, the Lowville Presbyterians, began constructing another church in the spring of 1831 but this time with stone rather than wood. This new church was praised for its, “federal form and gothic features” and resembled the “trends in mid-late 19th century ecclesial architecture” (Lowville Presbyterian Church, National Historic Register Nomination, 2007). The subscribers of the church collectively paid for the new church (Lowville Gazette, Mar 1830). By September of the same year the new building was completed and dedicated to “the service of Almighty God” (Lowville Gazette, 24 Aug 1831). With the number of members still growing, the society bought a house for the minister of the church and another building for meetings and Sunday school.

This stone church never met the same fate as the others and since its construction has been open for over 185 years! It did undergo a few renovations. In 1860, a bell was installed in the steeple. Almost two decades later a pipe organ was put in. At the start of the 20th century, a choir loft was added, as was a kitchen upstairs and some stained glass windows. In 1911, the old clock was replaced with a three-sided one. Sunday school was moved to the newly renovated basement in the 1950s and in 1968 the house next door was purchased for the pastors.

Due to the churches central location in the town and lengthy history it has become a local landmark. In 2007 it as added to the National Register of Historic Places. 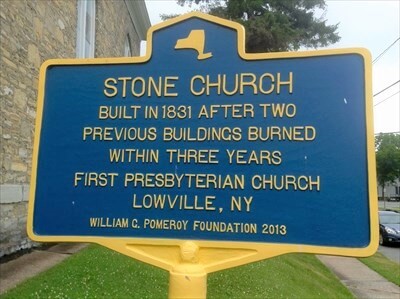 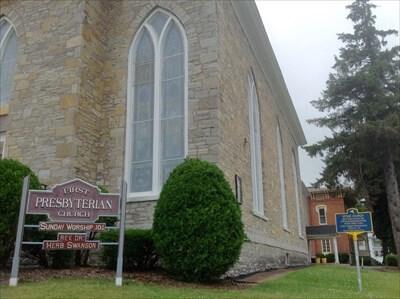 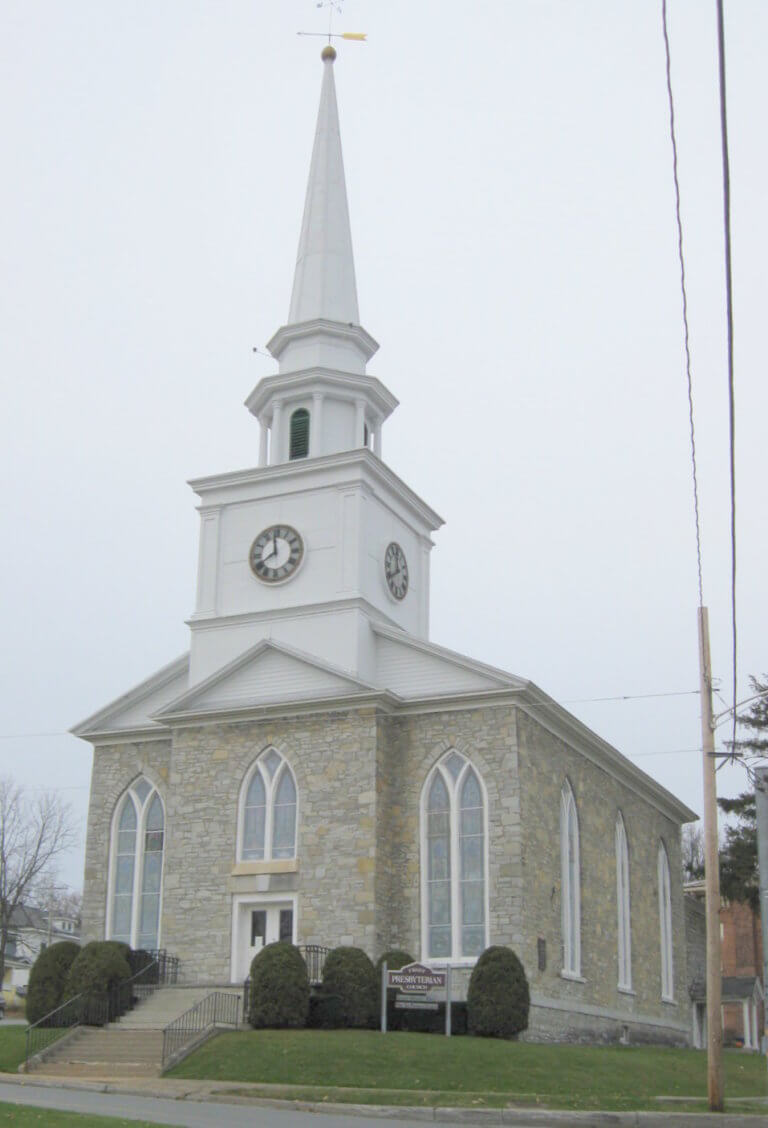