Though named for the town of Delhi, the Suffrage Club’s work covered all of Delaware County. Jennie Curtis Cannon, who provided the building for the club, was active in the women’s suffrage movement at both the county and statewide levels.

In an address at the first Equal Suffrage Convention of Delaware County, Jennie Curtis Cannon—the Assembly District Leader—gave a report about work accomplished in Delaware County. This specific address by Cannon is found in a special edition of the Delaware Express that was dedicated solely to the Women’s Suffrage Movement and edited by the Delhi Equal Suffrage Club. Published on June 19, 1914 with other accounts of the movement around the country, Cannon’s address notes how young the club she represented was, stating that it had only been around for two years at the time. The club was said to be a direct result of a visit by Harriet May Mills, who was a prominent suffragist with the New York State Woman Suffrage Association and had come to hold meetings around the county. Since the club’s formation, Cannon stated that five suffrage groups were organized in Delaware County, with 2,700 names recorded as being in support of equal voting rights.

Published in the special edition along with Cannon’s speech was a list of reasons why women needed the vote, supported by the Delhi Equal Suffrage Club as editors of that issue. The list included specific groups of women and how it was necessary for them to gain enfranchisement, with one group being business women. It was stated that those women should be able to “secure for themselves a fair opportunity in their business,” something that was denied them without a voice in politics. A second group of women highlighted were mothers, who were said to require the right to vote in order to “regulate moral conditions under which their children must be brought up.” In order to help achieve this goal for all women, the Sixth District—including Delaware, Otsego, Chenango, Broome, Tioga, Schuyler, Chemung, and Tompkins counties—was going to participate in automobile tours and local demonstrations meant to keep the “favorable sentiment…increasing.”

Along with the tours and demonstrations, progress for the Delhi Equal Suffrage Club, and Delaware County suffrage as a whole, came from the headquarters provided by Jennie Curtis Cannon. The wife of ex-Comptroller of the Currency and the president of Chase National Bank, Cannon possessed significant influence that she used to bring in “some of the leading suffrage speakers.” To host them, the New York Times recorded on September 26, 1915 that Cannon had created a space that made visitors “enthusiastic” to stay. With window boxes full of flowers and an interior that was “fitted as luxuriously as many a woman’s reception,” the headquarters served as a gathering place for weekly meetings and special guests.

Cannon documented her work as a suffragist and the progress the movement was making in the state of New York in a scrapbook that held newspaper clippings on any related topic. Archived by the Delaware County Historical Association, one article that Cannon clipped and saved was from the Delaware Express issue of November 5, 1915. The piece was actually written by Cannon, and it was discussing her reaction to the failure to pass an amendment for the New York State Constitution that would allow women the right to vote. While there was disappointment, Cannon noted that since it was the first time the amendment was being voted on, it “would have been nothing short of a miracle” to have it passed. As a representative for the movement in Delaware County, Cannon said that they were “not discouraged or dismayed,” and concluded her article by stating that the failed vote “cannot kill or put on the shelf a movement which stands for justice.”

As of 2019, the marker stood in front of the building that was the former site of the Delhi Equal Suffrage Club, now the Delaware National Bank of Delhi. 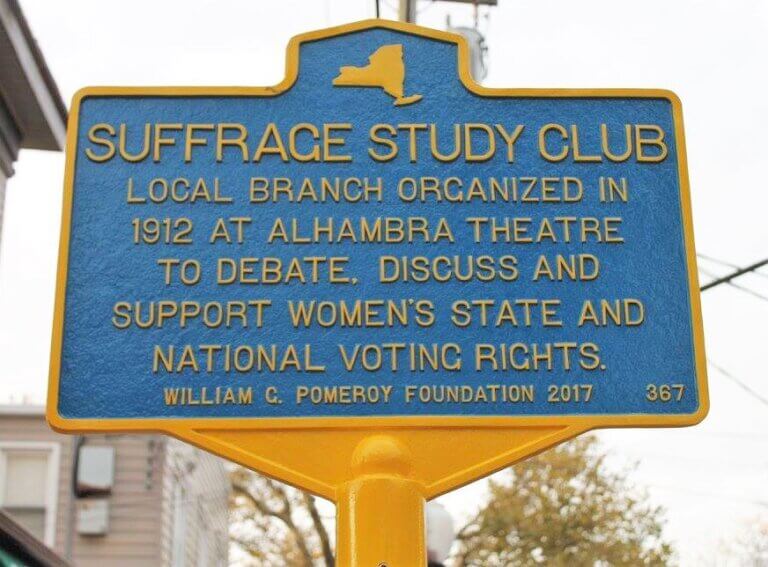