Druid Hill Avenue lies within the northwestern section of  Baltimore, Maryland. A group of homes along this storied avenue served as meeting places for the DuBois Circle and other notable African American women’s suffrage clubs.

The article, “The DuBois Circle and the Suffrage Movement,” by Ida Jones, was published in the winter 2018 edition of Baltimore Gaslight, by the Baltimore City Historical Society. In it, Jones describes how African American women began to form organizations “within churches, social circles and benevolent organizations,” all with the shared goal, “to advance the cause of the race through the betterment of family, home and community.” The article further states that following a 1905 conference of African American leaders in Niagara Falls (known as the Niagara Movement), the Baltimore Niagara Movement branch was formed. The Niagara Movement would later come to be known as the National Association for the Advancement of Colored People (NAACP). A group of well-connected African American women in Baltimore chose to form an auxiliary to this branch in 1906, called the DuBois Circle.

In 1920, the 19th amendment was ratified and women were granted the right to vote. With this newfound privilege came many questions surrounding what this actually meant. To address this uncertainty, Augusta T. Chissell created a column in the Baltimore Afro-American, called “A Primer For Women Voters,” where she would reply to readers’ concerns. In the October 16, 1920 issue, one woman asked, “What good will it do women to vote?” In reply, Chissell wrote, “It will give women power to protect themselves in their persons, property, children, occupation, opportunities and social relations. It will enable them to get done what ought to be done…so it will make all classes of women more nearly equal with men and with each other.”

The DuBois Circle was just one organization of African American women that met in the vicinity of Druid Hill Avenue of Baltimore. The Progressive Suffrage Club and Woman’s Co-operative Civic League were several others known for meeting at the Hawkins’ residence (Baltimore Afro-American, 20 Jan 1917 and 6 Jan 1917).  For the next few decades, Chissell and Hawkins would continue to fight for their right to vote. Even though it was now a legal right, most African Americans were prevented from voting due to racial discrimination.

As of 2019, the DuBois Circle was still active. At over one hundred years old, many believe it may be one of the oldest, surviving African American women’s organizations in Baltimore. 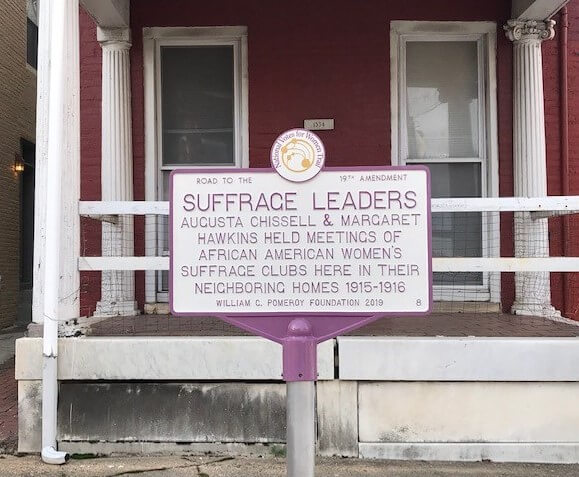